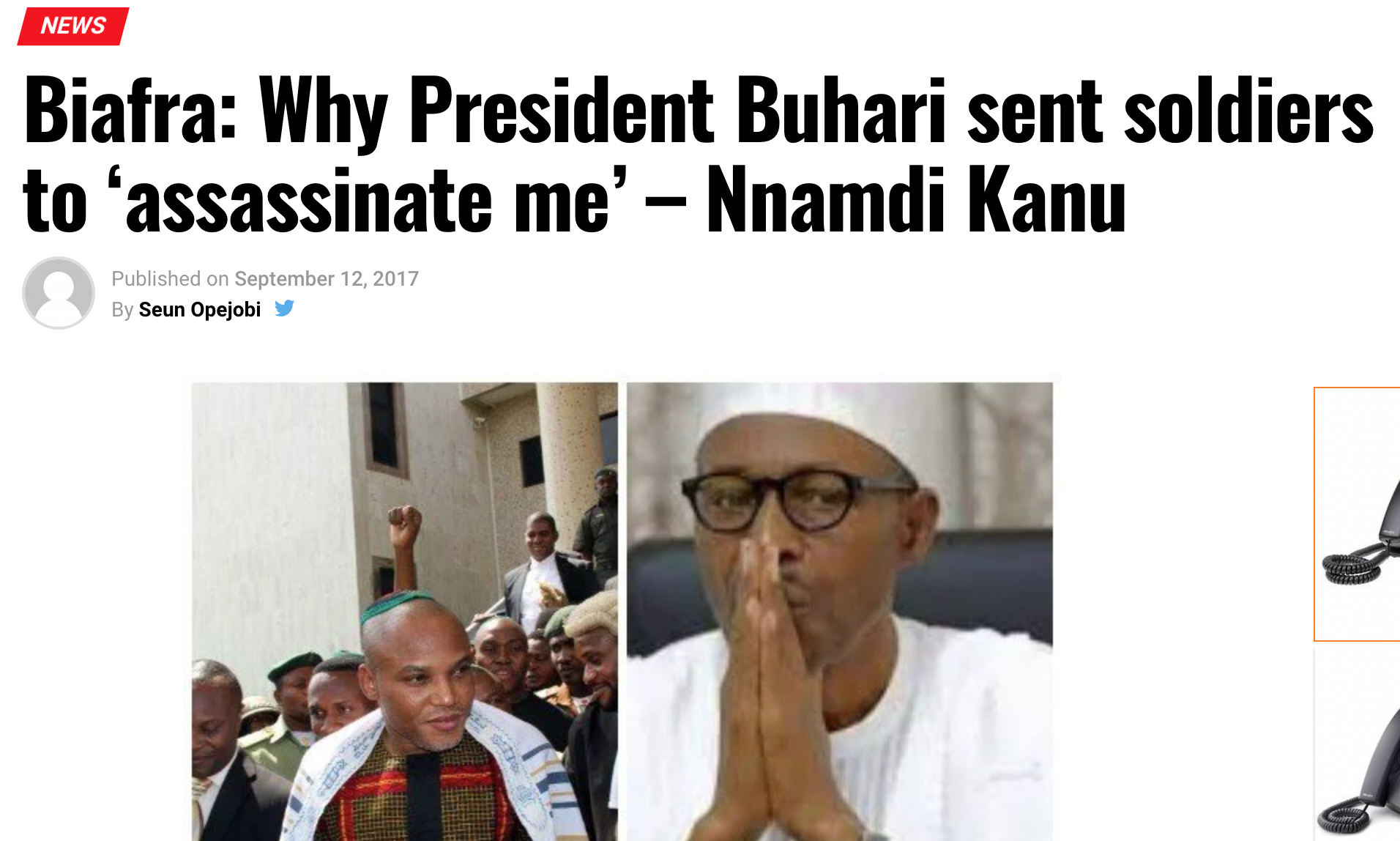 RESCUED from September 12th, 2017 in DailyPost

Were these the last ‘prophetic’ words of a man soon to die?

The leader of the Indigenous People of Biafra, IPOB, Nnamdi Kanu has alleged that the soldiers who held him hostage in his house were acting on the order of President Muhammadu Buhari.

Kanu claimed that Buhari gave the “Hausa, Fulani” soldiers’ order to assassinate him because he “strongly believes” and fights for the “liberation of Biafran people.”

Speaking through IPOB’s spokesperson, Emma Powerful, in a statement sent to DAILY POST, Kanu claimed that the Nigerian Army in a bid to perfect the assassination plot had attacked his convoy at “Ubakala junction on his way for an official assignment.”

The statement reads, “We the indigenous people of Biafra (IPOB) and its leadership worldwide under the command and leadership of Mazi Nnamdi Kanu the director Radio and Biafra television wish to bring to the attention of well-meaning Nigerians and the entire world that Nigeria Government led by Major General Muhammadu Buhari and his core Hausa fulani dominated jihadist army and Police in Nigerian uniforms have been drafted to Mazi Nnamdi Kanu’s house in Afaraukwu Ibeku Umuahia Abia State.

“The jihadist soldiers in Nigerian Army and Police uniforms surrounded our leader’s house today been 12th September 2017 with the instructions from Major General Muhammadu Buhari and those cabals in Aso Rock to assassinate Mazi Nnamdi Kanu and other IPOB members who strongly believe and fight in the struggle for the liberation of Biafran people.

“Right now, there is much tensions in Umuahia, the home town of Mazi Mazi Nnamdi Kanu. The Nigerian federal high in collaboration with the federal government of Nigeria led by Major General Muhammadu Buhari seized Kanu’s traveling documents because they wanted to kill him in Nigeria, this they have shown. But the killing of unarmed civilians in Biafranland including Mazi Nnamdi Kanu must not be accepted by Biafrans both home and in diaspora.

“The Nigerian soldiers drafted to Biafranland to assassinate Mazi Nnamdi Kanu and other members of IPOB mainly came from the core North of Sokoto, Zamfara, Kebby, Gigawa, Kano, Kaduna and Kastina states. On 10th September been Sunday the Nigerian Army killed our members in Umuahia, yesterday been Monday 11th of September 2017 the jihadist soldiers in Nigerian Army uniform attacked Mazi Nnamdi Kanu’s convoy at Ubakala junction on his way going for an official assignment. The Nigerian Army fired live bullets at his vehicle including his convoy.”

The statement said the Operation Python Dance exercise had turned the once peace region of South East into a dangerous zone.

This was as IPOB claimed that Buhari ordered soldiers under the exercise to harass and intimidate Igbos donning Biafra insignias.

“It’s a pity that in a democratic setting like this one in Nigeria can turn South Eastern Region into a war. Precisely the peaceful area of Ubakala junction, Isi Gate and Ibeku Nnamdi Kanu’s home town has become a dangerous zone since the declaration of infamous OPERATION PYTHON DANCE in the south East.

“We are on the know that Hausa-Fulani jihadist terrorists in Nigerian military uniform and regalia were sent by Major General Muhammadu to intimidate, harass and kill Biafrans in large numbers and not to fight kidnappers, armed robbers and cultists.

“The Operation Python Dance 11 are now seriously embarking on forceful abduction of Biafrans, brutalizing any anybody seen with Biafra insignia whether it is in your vehicle or houses. IPOB is putting the world on notice that the Nigerian Hausa-Fulani dominated government in a well organised plan to kill our leader Mazi Nnamdi Kanu and Biafrans through the launching of OPERATION PYTHON DANCE 11 in the south Eastern part of Nigeria.

“These plots to assassinate our leader Mazi Nnamdi Kanu in a broad daylight will trigger a catastrophic situation in Nigeria and parts of Nigeria, if they succeed in their evil plots,” the statement added.

RESCUED from September 12th, 2017 in DailyPost