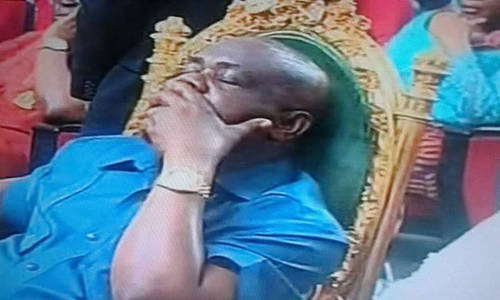 The Rivers State Chapter of the All Progressives Congress (APC) has accused the Care-Taker Governor of the State, Chief Nyesom Wike, of wasting over N120 billion during his first 100 days in office, which his administration attained two days ago without anything to show for it apart from falsehood and propaganda.

The party made the allegation in a statement signed by the State Chairman, Dr. Davies Ibiamu Ikanya, and issued on Monday in Port Harcourt. It gave the breakdown of the sum to include the N30 billion Wike borrowed shortly after assuming office, the N10 billion left by the administration of Rt. Hon. Chibuike Amaechi and over N80 billion that has accrued to the State from Internally Generated Revenue (IGR) and the Federation Account.

Rivers APC said: “Chief Wike represents everything that should not be found anywhere near the corridors of power. He personifies inaction, profligacy, corruption, maladministration and vendetta. Wike has not initiated any meaningful project in Rivers State since he forcibly assumed office in May 29th through the blood of Rivers people and in connivance with the corrupt and demented State Resident Electoral Commissioner, Dame Gesila Khan.

“Apart from setting up the vindictive Judicial Commission of Inquiry and awarding contracts to his companies for the filling of potholes in Port Harcourt and Obio Akpor local government areas, Chief Wike cannot justify the expenditure of the N30 billion he borrowed plus the N10 billion left by the administration of Rt. Hon. Chibuike Amaechi and over N80B that has accrued to the State through Internally Generated Revenue (IGR) and from the Federation Account.”

Continuing, Rivers APC said: “Apart from presenting roads constructed by the Amaechi’s administration as his feats in his 100Days in office declaration as no quality road can be constructed within six months talk less of 100days; sponsoring a media war aimed at disparaging and decimating the character of Rt. Hon. Amaechi and visiting various churches to pray for forgiveness for the 100 Rivers people killed in order to install him as Governor, Chief Wike can only boast of increase of insecurity, kidnapping, robbery and other criminal activities associated with a visionless administration. Today, all the initiatives of the Amaechi administration to curb insecurity in Rivers State have been annulled by Wike and his cohorts. The result is that Rivers residents now sleep with two eyes open as kidnapping, such as the case of Vanguard Columnist Donu Kogbara is now the order of the day.”

The statement berated Wike for failing to declare his assets contrary to the dictates of the Nigerian Constitution that elected public officers should declare their assets. “We are, however, not surprised about his reluctance to make his assets public because he knows that if he does so, Rivers people and the entire world would be shocked to know that half of the property in Port Harcourt is owed by Chief Wike and his acolytes due to his greed and insatiable crave for wealth,” the party said.

It equally lambasted Wike for refusing to constitute a cabinet but preferring to run the State from his bedroom in collaboration with Dame Patience Jonathan and other war lords that installed him as the Rivers State Governor.”