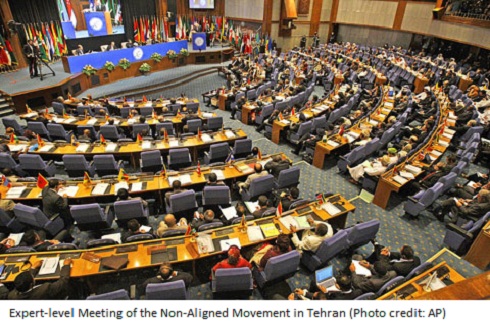 NewsRescue- The 2012 Non-Aligned Movement summit of 120 nations, kicked off in Tehran, capital of Iran this Tuesday. The summit typically serves to unite nations of the ‘developing world’ in what may be seen as a battle against the block of ‘developed’ world hegemony.

According to Reuters, “In a symbolic display that may have startled some delegates, the charred remnants of vehicles that were blown up in the assassinations of Iranian nuclear scientists have been put on show outside the conference centre in Tehran.”

Wikipedia- The organization was founded in Belgrade in 1961, and was largely the brainchild of Yugoslavia’s president, Josip Broz Tito; India’s first prime minister, Jawaharlal Nehru; Egypt’s second president, Gamal Abdel Nasser; Ghana’s first president Kwame Nkrumah; and Indonesia’s first president, Sukarno. All five leaders were prominent advocates of a middle course for states in the Developing World between the Western and Eastern blocs in the Cold War. The phrase itself was first used to represent the doctrine by Indian diplomat and statesman V.K. Krishna Menon in 1953, at the United Nations.[3]

In a speech given during the Havana Declaration of 1979, Fidel Castro said the purpose of the organization is to ensure “the national independence, sovereignty, territorial integrity and security of non-aligned countries” in their “struggle against imperialism, colonialism, neo-colonialism, racism, and all forms of foreign aggression, occupation, domination, interference or hegemony as well as against great power and bloc politics”.[4] The countries of the Non-Aligned Movement represent nearly two-thirds of the United Nations’s members and contain 55% of the world population. Membership is particularly concentrated in countries considered to be developing or part of the Third World.[5]

Iran’s Foreign Minister Ali Akbar Salehi said at the opening, that the foreign ministers of the Non-Aligned Movement (NAM) seek unity and cohesion among member states of the organization.

“In today’s meeting, the participants emphasized that [NAM] members should from now on try to make NAM viewpoints operational in the international scene by increasing cohesion and unity [among themselves],” Salehi said on the sidelines of the unveiling ceremony of the Non-Aligned Movement 2012 summit stamp in Tehran.

The top Iranian diplomat also noted that the Non-Aligned Movement (NAM) in Tehran is being held at a time when people of the region and the world are living in a special atmosphere.

“All member states of the Non-Aligned Movement in today’s meeting condemned international terrorism especially state-sponsored terrorism which has been founded by the Zionist regime [of Israel],” Salehi stated.

The two-day ministerial meeting of the 16th Non-Aligned Movement (NAM) summit kicked off in the Iranian capital on Tuesday.

At the opening ceremony of the NAM expert-level meeting, Iran assumed the rotating presidency of the movement for three years. Egypt’s Ambassador to the United Nations Mootaz Khalil formally handed over the presidency to Iran.  – PressTV