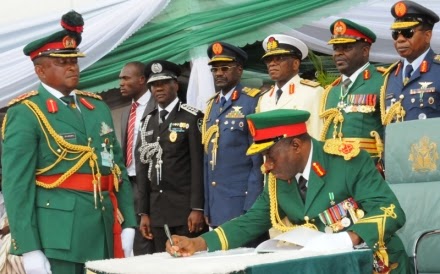 LEADERSHIP – To appoint Maj-Gen. Kenneth Tobiah Jacob Minimah as chief of army staff, President Goodluck Jonathan had to skip 31 generals who are his seniors in the Nigerian Army, LEADERSHIP Weekend has learnt. Of these generals, 15 would be retired soon while 16 may be left to work with the new army boss, it was further learnt.

Special adviser on media and information Dr Reuben Abati had said the president “in the exercise of the powers conferred on him by the Constitution of the Federal Republic of Nigeria” approved the following changes in the nation’s military high command: Air Marshal Alex Badeh takes over from Admiral Ola Sa’ad Ibrahim as chief of defence staff; Maj-Gen. Kenneth Tobiah Jacob Minimah takes over from Lt.-Gen. Azubuike Ihejirika as chief of army staff; Rear Admiral Usman Jibrin takes over from Vice Admiral Dele Joseph Ezeoba as chief of naval staff; and Air Vice Marshal Adesola Nunayon Amosu takes over from Air Marshal Badeh as chief of air staff.
There was a conflict in the statement issued by Abati. He stated that “all the changes are with immediate effect” and that the president would soon seek the approval of the National Assembly as mandated by the constitution.

Since the announcement of what a top security person described as a tsunami, an uneasy calm has pervaded in most military formations and embassies abroad, since one aftermath of the re-organisation should include mass retirement of top officers who, according to the tradition of the military, would not be able to fit into the new system because of their years of service.

“President Jonathan as the commander-in-chief has the constitutional right to appoint whoever he wants as the service chiefs since the offices have become political, but courtesy calls for caution in considering who becomes what because of the implication on the military, especially the very senior officers who may be asked to go on voluntary retirement,” a security top brass said. “One of the implications of appointing Maj-Gen. Minimah (a Regular Course 25 member of the Nigerian Defence Academy) as the chief of army staff is that all those who are his seniors, like Course 24, 23 or 22, are going. This is the tradition. The same thing would happen in the Air Force. In the Navy, those who are members of Regular courses above the new chief would go. This is why it is dangerous to allow the service chiefs to stay beyond the terms and conditions of service which stipulates 56 years of age and 35 years in service.”

The source further explained that, with the imminent mass retirement, “all the services would be forced to overhaul the recent appointments made by the outgoing service chiefs because the new helmsmen would like to bring on board officers that they believe would give them absolute support”.

Another military officer who noted that the appointment of General Minimah did not go down well with some forces in the north which lost out and that they would shift the battlefield to the National Assembly.

“The appointment of Minimah is an ill-wind that blows into the face of the military. We have been crying out that the agenda of Jonathan is to name his kinsman the chief of army staff right from his days in Lagos Command but they said we were alarmists; now the hen has come home to roost. There are so many officers who are superior to Minimah; now what becomes of them?

“One good thing is the appointments made by Jonathan are subject to the approval of the National Assembly. Let them (the lawmakers) ask him to explain why Minimah should be the COAS when there are very senior officers above him,” he said.

The new chief of defence staff and former chief of air staff, Air Marshal Badeh, was born on January 10, 1957, and hails from Adamawa State. He joined the Air Force as a member of the Nigerian Defence Academy’s 21 Regular Course.

The new army chief, Maj-Gen. Minimah, was born on July 27, 1959, and joined the Army as a member of the Nigerian Defence Academy’s 25 Regular Course. Until his new appointment, he was the commander of the Nigerian Army Infantry Corps, Jaji. Minimah hails from Rivers but, because he is an Ijaw man, some Nigerians believe he is from Bayelsa like Jonathan.