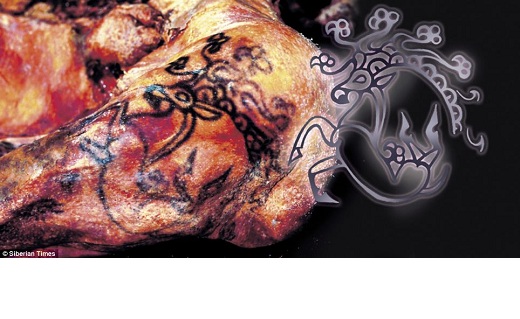 The astonishing 2,500 year old tattoos of a Siberian princess, and how they reveal little has changed in the way we decorate our bodies

By Will Stewart In Moscow

The intricate patterns of 2,500-year-old tattoos – some from the body of a Siberian ‘princess’ preserved in the permafrost – have been revealed in Russia.

The remarkable body art includes mythological creatures and experts say the elaborate drawings were a sign of age and status for the ancient nomadic Pazyryk people, described in the 5th century BC by the Greek historian Herodotus.

But scientist Natalia Polosmak – who discovered the remains of ice-clad ‘Princess Ukok’ high in the Altai Mountains – is also struck about how little has changed in more than two millennia.

The Body of Princess Ukok, who died aged 25, had several tattoos on her body, including a deer with a griffon’s beak and a Capricorn’s antlers. The tattoos have been perfectly preserved for 2,500 years.

‘I think we have not moved far from Pazyryks in how the tattoos are made,’ she told the Siberian Times ( SiberianTimes.com ).

Princess Ukok, who died aged 25, was believed to be either a royal, a revered folk tale narrator, a healer or a holy woman.

She was surrounded by two male warriors to protect her, and six horses to ease their journey into the next life.

‘It is still about a craving to make yourself as beautiful as possible.’

‘For example, about the British.

‘A lot of them go on holiday to Greece, and when I’ve been there I heard how Greeks were smiling and saying that a British man’s age can be easily understood by the number of tattoos on his body.

‘The older a person, the more tattoos are on his body.’

Dr Polosmak added: ‘We can say that most likely there was  – and is – one place on the body for everyone to start putting the tattoos on, and it was a left shoulder.

‘I can assume so because all the mummies we found with just one tattoo had it on their left shoulders. Researchers also found two warriors close to the Princess , and were able to reconstruct their tattoos. Here, one is shown with an animal covering the right side of his body, across his right shoulder and stretching from his chest to his back.

‘And nowadays this is the same place where people try to put the tattoos on, thousands of years on.

‘I think its linked to the body composition – as the left shoulder is the place where it is noticeable most, where it looks the most beautiful.

‘Nothing changes with years, the body stays the same, and the person making a tattoo now is getting closer to his ancestors than he or she may realise.’

The tattoo patterns are from the ancient ‘princess’ who died at around the age of 25 – and from two warriors found on an ancient permafrost burial site at Ukok Plateau some 2,500 metres above sea level close to Russia’s frontiers with modern day  Mongolia, China and Kazakhstan. Princess Ukok’s hand with marked tattoos on her fingers. She was dug out of the ice 19 years ago, and is set to go on public display in the Altai Republic.

The reconstruction of the tattoos in the images shown here were released to coincide with the moving of the remains of the princess, dug out of the ice 19 year ago, to a permanent glass sarcophagus in the National Museum in Gorno-Altaisk, capital of the Altai Republic.

Eventually she will be displayed to tourists.

Buried around her were six horses, saddled and bridled, her spiritual escorts to the next world, and a symbol of her evident status, though experts are divided on whether she was a royal or a revered folk tale narrator, a healer or a holy woman.

Next to hear body was a meal of sheep and horse meat and ornaments made from felt, wood, bronze and gold.  And a small container of cannabis, say some accounts, along with a stone plate on which were the burned seeds of coriander.

‘Tattoos were used as a mean of personal identification – like a passport now, if you like,’ said Dr Polosmak. The tattoos of one of two warriors found on the ancient permafrost burial site at Ukok Plateau some 2,500 metres above sea level close to Russia’s frontiers with modern day Mongolia, China and Kazakhstan Tattoos are clearly visible on one of the warrior’s shoulders. The designs are similar to those found on the Princess.

‘The Pazyryks also believed the tattoos would be helpful in another life, making it easy for the people of the same family and culture to find each other after death.

‘Pazyryks repeated the same images of animals in other types of art, which is considered to be like a language of animal images, which represented their thoughts.’

The tattoos were ‘used to express some thoughts and to define one’s position both in society, and in the world.

The more tattoos were on the body, the longer it meant the person lived, and the higher was his position.

‘For example the body of one man, which was found earlier in the 20th century, had his entire body covered with tattoos, as you see on the picture of his torso,’ said Dr Polosmak.

‘Our young woman – the princess – has only her two  arms tattooed. So they signified both age and status.’ The Ukok plateau, Altai, Siberi, where Princess Ukok and two warriors were discovered. Their bodies were surrounded by six horses fully bridles, various offering of food and a pouch of cannabis. Princess Ukok: sculptor’s impression of what she looked like 2,500 years ago

The Siberian Times said: “The tattoos on the left shoulder of the ‘princess’  show a mythological animal – a deer with a griffon’s beak and a Capricorn’s antlers.

‘The antlers are decorated with the heads of griffons.

‘And the same griffon’s head is shown on the back of the animal.

The mouth of a spotted panther with a long tail is seen at the legs of a sheep.

‘She also has a dear’s head on her wrist, with big antlers.

‘There is a drawing on the animal’s body on a thumb on her left hand.

‘On the man found close to the ‘princess’, the tattoos include the same fantastical creature, this time covering the right side of his body, across his right shoulder and stretching from his chest to his back.

‘The patterns mirror the tattoos on a much more elaborately covered male body dug from the ice in 1929 whose highly decorated torso in reconstructed in our drawing here.

‘His chest, arms, part of the back and the lower leg are covered with tattoos. There is an argali – a mountain sheep – along with the same dear with griffon’s vulture-like beak, with horns and the back of its head which has griffon’s head and an onager drawn on it.’
Link: http://www.dailymail.co.uk/sciencetech/article-2188157/The-astonishing-2-500-year-old-tattoos-Siberian-princess–little-changed-art.html#ixzz23a7d71zm