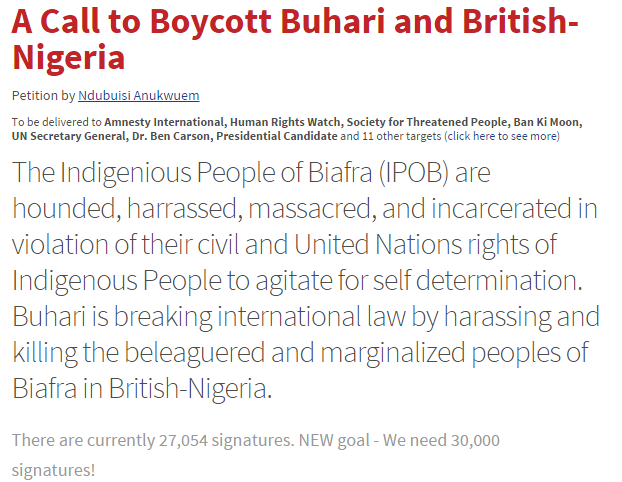 Almost 30,000 Igbos have signed a public petition to “Boycott Buhari and British-Nigeria.”

As at report time over 27,000 Igbos had signed the petition with over a thousand signing in the past 24 hours. The petition with very disparaging words was initiated by a certain  Ndubuisi Anukwuem of the notorious Radio Biafra run IPOB organisation that has been loudly promoting secession of the five Igbo states as “Biafra.”

It has been observed that Radio Biafra and the IPOB and MASSOB groups have gotten highly upset, most vocal and appear well sponsored after their preferred candidate, former Nigerian president Goodluck Ebele Jonathan who Nnamdi Kanu called Igbo, was sacked from the leadership of Nigeria. With more vicious action coming as corruption charges and arrests have been slammed on former administration members.

We have earlier reported on incisive and potential terror broadcasts by the Radio station IPOB organisation, however while the station led by a certain young megalomaniac, Nnamdi Kanu, may be extremist, that there is a large agitation among Igbos for self determination cannot be simply overlooked.

The Radio Biafra London facebook page has over 600,000  members, so getting the signatures is easy. The large number of fans also provides incredible income to Nnamdi Kanu and other group patrons.

The petition on MoveOn.org stated:

The Indigenious People of Biafra (IPOB) are hounded, harrassed, massacred, and incarcerated in violation of their civil and United Nations rights of Indigenous People to agitate for self determination. Buhari is breaking international law by harassing and killing the beleaguered and marginalized peoples of Biafra in British-Nigeria.

About half the signatures appeared to be from Igbos outside Nigeria with half signing from locations within the country.

We could not verify the signatures.