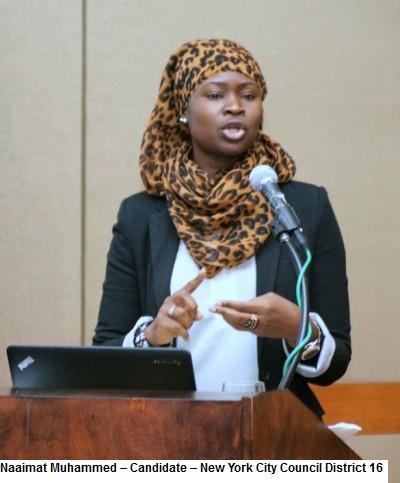 On May 15, United African Coalition of the Bronx endorsed Dr. Omotosho as their best candidate to represent District 16.  After the endorsement, Bello and Diallo decided to lend their support to Dr. Omotosho.

However, Muhammad, a daughter of Ghanaian and Togolese immigrants born in the Bronx refused to drop out of the race; she went ahead and filed a petition, which requires candidates to submit 450 signatures to be eligible to be on the primary and general elections.

“We had over 2600 signatures.  We were able to acquire these qualifying signatures by targeting registered democrats based on information from the board of elections,” said Muhammad.

The New York City Board of Elections (BOE) had moved to disqualify Muhammad due to what she described as a minor error on the cover sheet of her petition.

Subsequently, Muhammad appealed the Board of Elections disqualification to the New York Supreme Court and won.  Muhammad said because of the challenge, the city’s Campaign Finance Board suspended her public campaign funding adding that she was unable to pay her campaign workers and had to use her own resources to hire a lawyer for her appeal.

“As for the appeal, we were all shocked at the outcome in the Supreme Court which held our cover sheet error against us in lieu of apparent errors by the board of election.  Nonetheless, it is my belief that it is due to a lack of precedent within the Supreme Court that we were not vindicated at that time,” Muhammed said in a statement.

She said the appellate division, which does have a number of cases and rulings on BOE matters “did see the validity in our claim and hence we were finally vindicated and placed back on the ballot.  This caused a great deal of disturbance in our operations.  We were not invited to events, meetings or debates that desired certified candidates alone.  A slew of opportunities went by and we were being ruled out of the race too soon,” .

According to Muhammed, “Competitors were in the field pre-maturely announcing our disengagement.  They were certain I was out of the race.  It was the most difficult two weeks of this entire campaign process.  My entire team, family and community were distraught that all of our hard work would have gone in vain.”

Speaking on behalf of Dr. Omotosho Saturday during a phone call seeking comments campaign manager Curtis Geiger said their campaign would not comment on the general objections that they filed against Muhammad because she is now on the ballot.

However, Geiger made the following pronouncement “I think the race comes down to Dr. Bola Omotosho and Vanessa Gibson, those are the two strongest candidates in the field.   He has been working hard to try to win against great odds…some people are backed by so much big real estate money that they poured into the campaign to take control of the City Council.”

Though, Muhammed has overcome the ballot challenge hurdle, on Tuesday she faces stiff competition from Sierra, a candidate who election watchers say has “significant name recognition in the district after he earned 40 percent of the vote in 2009 when he challenged outgoing Foster and from frontrunner Assemblywoman Gibson who has the support of the Bronx Democratic establishment.

Still, Muhammed said she is fully determined to beat all odds in Tuesday’s primary to represent her constituents in District 16 in the Bronx.