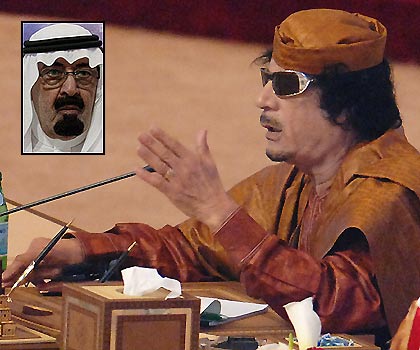 Maverick Libyan leader Muammar Gaddafi stole the show at Monday’s Arab summit, insulting Saudi King Abdullah and proclaiming himself “king of kings of Africa” before storming out to visit a museum.

But the flamboyant Gaddafi also left the door open for reconciliation with Abdullah, whose Western-backed kingdom is a regional heavyweight and the world’s largest oil exporter.

“It has been six years since you have been avoiding a confrontation with me,” Gaddafi snapped, just as summit host Qatari emir Sheikh Hamad bin Khalifa al-Thani was ending his speech.

“You are always lying and you’re facing the grave and you were made by Britain and protected by the United States,” Gaddafi told Abdullah in front of 15 other leaders attending the annual gathering.

Tensions have run high between the two countries since articles in US and Saudi newspapers in June 2004 accused Gaddafi  of allegedly plotting to assassinate Abdullah, then crown prince.

“I am the leader of the Arab leaders, the king of kings of Africa and the imam of the Muslims,” proclaimed Gaddafi, the Arab world’s longest serving leader who has been in power since 1969.

Gaddafi, recently elected as African Union chairman, was bestowed with the title “king of kings” by African tribal dignitaries in September 2008.

State-run Qatari television interrupted the feed to the press room, but when the broadcast was restored, Gaddafi was heard telling Abdullah: “I am ready to visit you and for you to visit me.”

“I tell my brother Abdullah, that you have avoided me for six years and you are afraid to confront me,” Gaddafi said, according to the Libyan media. “I want to reassure you: there is no need to be afraid.

“I tell you that after six years, it has been proven whose past is a pack of lies and who is facing death,” he said, echoing similar remarks by Abdullah at a 2003 Arab summit.

“You are a product of Great Britain and protected by the United States,” Gaddafi said, again quoting from Abdullah’s 2003 attack on him at the Egyptian Red Sea resort of Sharm el-Sheikh.

“Out of respect for the (Arab) nation, I consider the personal problem between us over and I am ready to visit you and to welcome you” to Libya, Gaddafi said, the Libyan state media reported.

The flamboyant Gaddafi, dressed in an ochre robe and cap and wearing black sunglasses, then rose and swept out of the conference centre, with aides saying he was off to visit a museum.

The Qatari emir later hosted a meeting to reconcile the two.

“The misunderstanding between Saudi Arabia and Libya has been ended during this summit,” Libyan official Ahmad Kadaf al-Dam told reporters.

Gaddafi has a history of unpredictability at such gatherings.

At an Arab summit in 1988 he wore a white glove on his right hand to avoid shaking “bloodstained hands”, and the following year he blew smoke from a fat cigar into the face of the late king Fahd of Saudi Arabia.

At the 2005 Arab summit in Algiers he upstaged the final session with an unscheduled address in which he described Israel and the Palestinians as “idiots”, leaving his audience in fits of laughter.

One aim of the Doha summit was to reunite Arab ranks divided over Israel’s 22-day onslaught on the Gaza Strip.

“Without Arabs There Would Be No America,” Gaddafi Said In War Of Words With Saudi King

During an Arab summit meeting in 2010, late outspoken Libyan leader, Muamar Gaddafi as typical of him slammed the Saudi King Abdullah for partnering with the United States as desperate enough to “strike a deal with the devil.” Slamming the King openly as he had done severally including when he predicted his demise, late King Gaddafi would not agree for a closed session but lambasted the Arabs for colonial slavery and inviting Americans into what should be solved within Arab Gulf nations.

As King Abdallah vexed and later walked out, Gaddafi declared that if it were not for Arab states there will be no America today.

Here is the full exchange between the two late Arab leaders:

“He (King Abdullah) said ‘America is a powerful country, who could prevent them from entering into the region?’

“I said ‘how could America just go into a sovereign country?’

“We later on met and he said ‘Iraq (after Kuwait) invaded Saudi Arabia!’

“I said ‘how come?’…He said ‘we went to see it and there were hundreds of Iraqi tanks on Saudi front’

“The reality is that in order to defend itself at that time, Saudi Arabia would have made a deal even with the devil himself! So, Saudi Arabia called for the US forces in.

“And yeah, the Iraqi threat under that situation was a source of worry for our brothers in Kuwait, Saudi and the Gulf …and America has vowed to protect these regions because it is indeed a very important place for source of energy.”

“So…if you have any correction, please go ahead brother Abdullah”

“This thing has stopped working!

“Your excellency Mr. President(Gaddafi), your talk requires a response.

“Saudi Arabia is a frontage (you said).

“Do not speak or indulge yourself in things you’ve no business with!…and the (lie) is before you, and the (grave) is in front of you!”

***Saudi King starts to walk out

“What is he talking about?

“The solution to the problem is in the Arabs hand… especially for our brothers in Kuwait. They can sort out the problem…

*** “Someone says, “request for closed session.”

“Look, if it were not for the Arabs in the Gulf, there wouldn’t be any America!”

Gaddafi was killed a year later in a joint NATO-America, Saudi-Qatar led bombardment that saw 50,000 sorties dropped on the African nation all the road from Benghazi to Tripoli to allow a mercenary terrorist force invade and eject the nation’s popular leader.