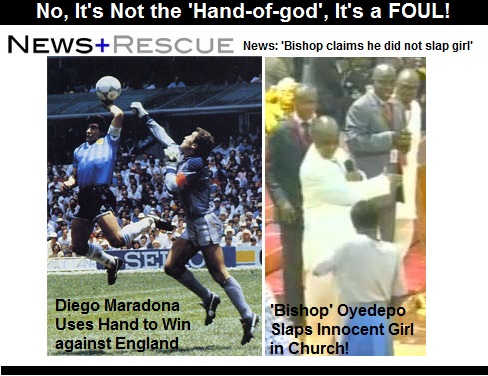 NewsRescue- In continuation of the highly dehumanizing and arrogant display from the man of authority,  billionaire Pastor Oyedepo of the Living Faith Christian Church has submitted to court that he did not slap the defenseless lady member of congregation. The arrogance of Nigerians in positions of power has no equal and this unfortunately extends to the religious institutions.

Bishop Oyedepo had in the video below actually bragged about slapping the defenseless Church attendee and even promoted harassment and violence to Church members, shortly after the scandal broke across the global media. We invite you to watch with com as this shameless Bishop brags about his violation in a house of God and advocates violence.

If as he deposes in media story below, this foul was not  a foul, then it must as occurred in the historic Diego Madonna ‘header’ win in the 1986 quarter-final between Argentina and England, in his view, have been the ‘hand-of-god‘.

“We submit that slapping being an act of assault an item outside the provisions of Chapter 4 of the 1999 constitution and the African Charter, this court therefore lacks jurisdiction over same.”

The multi billionaire founder of the Living Faith Christian Church International, Bishop David Oyedepo, has denied slapping a young member of his congregation; stating that neither he nor his church could be sued.

In a notice of preliminary objection filed at the High Court of Ogun State and made available to PREMIUM TIMES; Bishop Oyedepo maintained that he and his church are “non juristic persons” and therefore asked the court to strike out the suit as it lacked jurisdiction to adjudicate on the matter.

Robert Igbinedion, a Lagos based lawyer, had in April, filed a suit on behalf of the young lady, who was slapped during a church service, for the enforcement of the lady’s fundamental rights to freedom from inhuman and degrading treatment, human dignity, fair hearing, and freedom from discrimination.

Mr. Igbinedion prayed the court to award the sum of N2bn as ‘general and exemplary damages’ against the bishop as well as compel him to publish a public apology in two national dailies and one international satellite television.

In a counter affidavit deposed by Olugbenga Adegboye, the church’s senior legal officer, Bishop Oyedepo stated that “his ministry is a ministry where the holy bible is preached and people are prayed for without coercion.”

The church also said that there is no record of anyone called Miss Justice – a sobriquet given to the young lady for the purpose of the suit – in any of its services organized in the past.

A written address to support the preliminary objection signed by F. B Agbanwu, the church’s Solicitor, insisted that the matter is not within the Nigeria constitution or the African Charter on Human and People’s Rights.

Furthermore, the church urged the court to determine whether Mr. Igbinedion is capable of “bringing this kind of application” before it and whether “it is proper to bring this application against the 1st and 2nd respondents (Bishop Oyedepo and his church respectively).

Arguing that both Mr. Igbinedion and the respondents cannot sue and be sued, Bishop Oyedepo’s lawyers noted that the cause of action must centre on clear infringement of a fundamental right.

“The cause of action or principal claim in this application centres merely on slapping one Miss Justice by the 1st respondent.

“We submit that slapping being an act of assault an item outside the provisions of Chapter 4 of the 1999 constitution and the African Charter, this court therefore lacks jurisdiction over same.”

The court sits, June 1, for parties to adopt their motion before judgment is fixed.

In December last year, a YouTube video of Bishop Oyedepo viciously slapping a young lady who admitted that she was “a witch for Jesus” during an altar call went viral on the internet.

A second video that surfaced days later showed the bishop justifying his action adding that it is “his ministry to slap” and that “if he sees another witch, he’ll slap.”