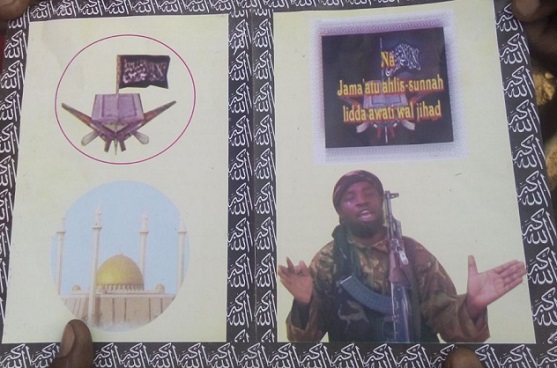 We have obtained the full translation of a fancy printed, air force jet dropped message in Gombi, Adamawa yesterday, purported to be from Boko Haram.

The messages were printed in full color, double-sided, folded in the middle, landscape style on A4 size flyers. The suspicious flyer had an image of sect leader ‘Shekau’ and the Abuja central mosque on the cover.

In the message that commentators refer to as a “Greek gift,’ the terrorists claimed to apologize for having been ‘used,’ and claimed that they now realized their leaders were misguided and simply ‘corrupt.’ 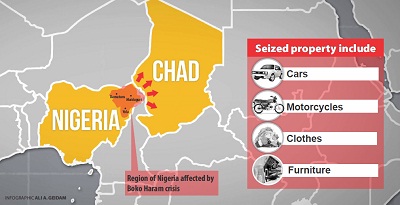 The terrorists confessed to simply be loot plunderers, saying that the billions worth of goods and property they plundered from Nigeria were sold in Niger, Cameroon and Chad to feed the pockets of their corrupt and greedy leaders. Over 90 trucks of goods and money were carted away from Mubi, Adamawa state in one of the largest heists in recent times.

Perhaps what was most ridiculous about the flyer written in non Nigerian Hausa script, probably Chadian or Nigerian, was that Boko Haram leader, Abubakar Shekau was printed on the front. This questioned the purpose and factuality of the flyer. Is ‘Abubakar Shekau’ not one of the so-stated corrupt leaders or if he identifies with this new message, is Abubakar Shekau claiming to not be the group leader, but have been used by some other higher-up leaders? of course the later is not the case as Shekau just released a latest unrepentant video; so why will so-claiming repentant Boko Haram terrorists use his image on their well printed pamphlet? And why did likely Nigerian military air force jets distribute this Boko Haram propaganda as we reported yesterday?

Below is the translation:

Translated by Idris Ahmed of CUPS

We started this struggle together, and united in Boko Haram. We slept together, we ate together, and drank together. At the beginning of our struggle, we prayed together and read the Holy Quran together. Today it has been five years since we started this struggle in Allah’s name. We have now figured out that we have been used to perpetrate corruption and selfish ends. We woke up and realised that our leaders are living in luxury, while the rest of us are living in abject poverty in the name of Jihad.

Quran Chapter 8:61 reminds us that Islam is a religion of peace. The Holy Quran explains clearly the terms and conditions of a genuine holy war in Chapter 2:190. Similar, the Holy Quran forbade us unlawful killing the innocent in Chapter 6:151, because life is sacred in the eyes of God.

Even though we started with dignity, by preaching the tenets of Islam, today we are in a situation whereby we have burnt all villages, and spilled the blood of those who have caused us no harm, especially Christians, without reason or justification whatsoever. Similarly, we have expelled masses from their homes and villages. All the while we are killing our fellow Muslims, despite the fact that the Holy Quran forbade this in Chapter 4:29-30. This is Allah’s prohibition. All the material wealth that we pillaged from villages, towns, cities, and states, which are meant to be used for this struggle,  have been carted away by our leaders to street markets in Ndjamena Chad, Bosso in Niger Republic, and Fotokol in Cameroun. The proceeds from selling these stolen goods go straight into the accounts of our so called leaders, who are up to nothing but wanton destruction of our country.

Brethren! There is no hiding place when the chips are down. The horizon is clear and our eyes are wide open. The time has come for us to comprehend over the destruction of our country, and the wanton destruction of human life and property under the false pretext of Jihad. Look round and see how they made us to destroy our towns and cities of commerce and technology like Gamboru, Marte, Mallam Fatori, Damasak, Baga, Maiduguri, Monguno, and Gaidam, which accorded us hospitality when we started this struggle. Remember, it was in Gaidam that our leader, late Muhammad Yusuf, gave the call to Jihad in 2009. In our capacity as citizens of Northern Borno, from today we have ceased to give our support and material assistance to this insanity that these marauding thieves are engaged in, in the name of Jihad. And by God’s name, all of us Kanuri’s that are in Boko Haram must stand firm and fight these rascals and hooligans who are killing innocent people in the name of religion. Enough of using us in the name of religion. 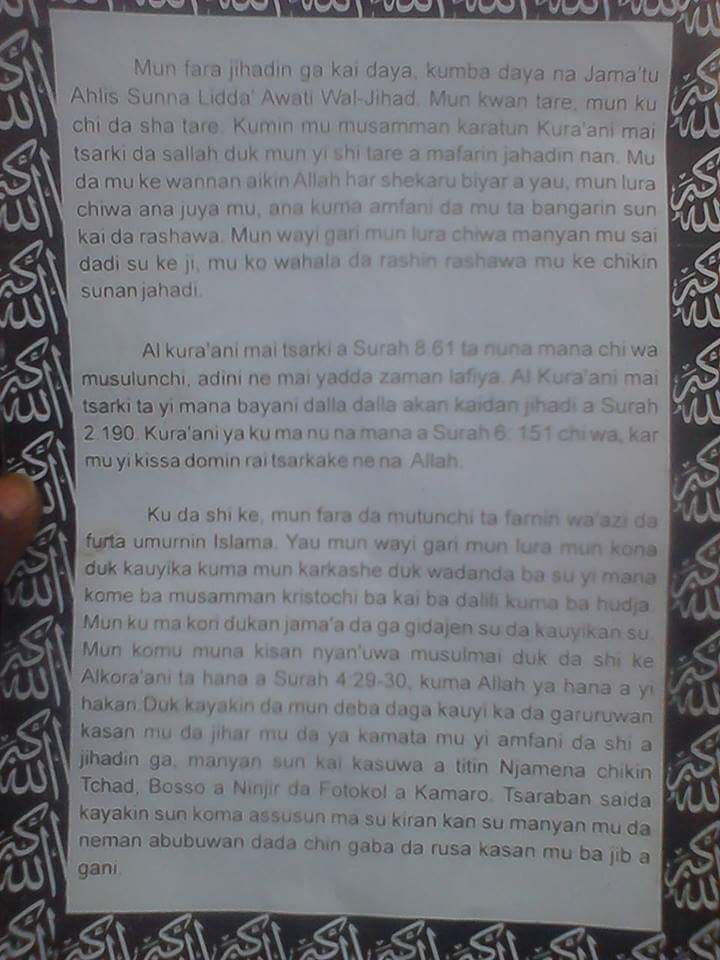 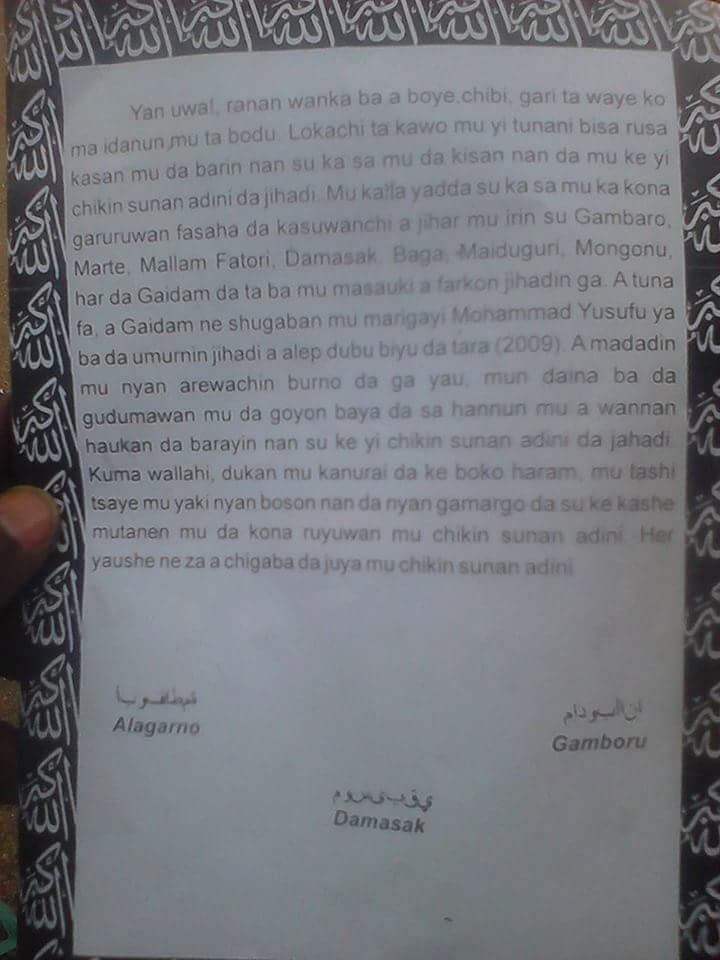