Follow these links to see the ridiculously FAKE, floating over-sized head Shekau with the same green-screen, similar to the September “I am alive” video,  in globalist media reports from May 29th, 2013: FoxNews, AFP hosted on Yahoo, JapanToday, StarAfrica. AFP never produced the video these images were said to have been taken from in May. This was a very, very poor photoshop job. More links in story.

We have detailed in several articles, the foreign plot to use Boko Haram terrorism to destroy Nigeria and necessitate foreign intervention and invasion. On May 15th, Nigerian president Goodluck Jonathan suddenly complied to NewsRescue’s May 8th report (Nigeria At War) which presented an urgent call for the declaration of a State of Emergency (SoE) and full troop deployment to the northern states, despite rejection for the SoE from all governors and party members and Nigerian leaders across board; and to an unsuspecting West.

The declaration of war by the president as NewsRescue had urged, yielded great results against the terror menace, significantly incapacitating them. However this did not please the foreign elements who immediately started discouraging the Nigerian army, claiming the army was worse than this several thousand strong fully armed terrorist rebellion that had destroyed half of Borno.

Now for some odd and sick reason, the global media is working hard to present the terrorist leader as still alive, doing so with numerous glaringly fake videos and images. It is obvious the enemies of the Nigerian people will stop at nothing to cause suffering, pain and terror.

The video was obtained and released on September 25th, exclusively by AFP in tiny pieces over 24 hours after it was reported to have been obtained and the complete video is yet to be released to the general public or media till date.

This video was released 24 hours later, only after media like ours insisted the simple report of a new video was cock and bull.

NewsRescue earlier concluded that Shekau is dead or as good as dead. The so-called new video’s are simply the works of Nigeria’s internal and foreign enemies who wish to utilize the Boko Haram saga for political and territorial invasion purposes.

We present here some peculiar information from our experts recent analysis.

Boko Haram and the love for the Hollywood green screen

The green screen is a Hollywood tool that can be used to impose and transpose video recordings on new backgrounds. It enables video pliability with recordings in the studio against a green-screen background easily being manipulated to appear outside, in a battle field, flying, in a crowd etc.

The shot below is from the ‘latest’ video released September 25th:

Now, a funny finding we discovered on the internet from way back 29th May this 2013, of another purported video of Shekau, also released exclusively by AFP, seen here on JapanToday and StarAfrica:

Please do not laugh!

These are real clips from videos AFP purportedly obtained of Shekau in May this year, according to several websites:

The notorious Aljazeera also published this so-called May new video story, but refrained form using the caricature Green-screen-ghost Shekau images. Reuters too referenced, but showed not this weird video, nor even a still from it, they said on May 29th, “in a video seen by Reuters on Wednesday,”. United States FOX news and so many other media carried this glaringly fake, floating head image from the never revealed video that AFP distributed. See: http://www.foxnews.com/world/2013/07/13/boko-haram-leader-supports-nigeria-school-massacre/

We immediately notice how weird Shekau looks in the May videos, with an obviously floating head.

The second thing that is rather obvious is the Hollywood green-screen.

The very same green mat that Shekau used in his purported May AFP videos, is the same peculiar carpet that he used again in the September video that the Nigerian government said his mouth did not move according to the words in.

There were slight changes to attire and people were added in front of the green-screen.

Assuming these are real videos, this would mean for certain that Shekau has been comfortably living in one location from May to September, or that he and his crew haul that bulky green carpet across the mountains.

We wonder how many different scene green-screen videos late Shekau recorded and deposited in a safe with Nigeria’s enemies for manipulation forever to maintain the sense of his immortality.

The May video where green-screen ghost Shekau purportedly denied the impact of the military onslaught was never distributed, because at that time NewsRescue and other NAM did not demand it as we did now, so only these weird two images were released.

It is possible that someone in Nigeria produced these ridiculously fake images to send to AFP, but this does not absolve AFP and other global media of their responsibility to screen such rubbish, floating head, spurious, rancid material from public consumption.

The Other Video Released By Western Media

There is interestingly another video released again exclusively by AFP, between these two videos.

In this one, again our charismatic Shekau appeared like the most sick and retarded doll: 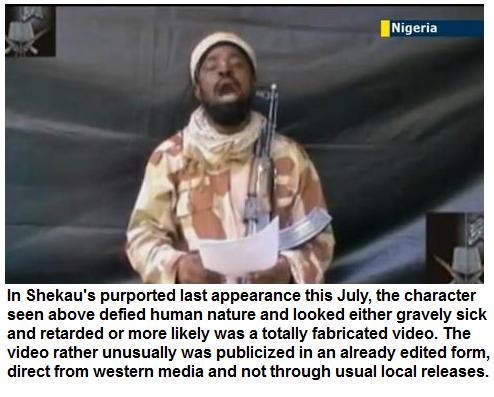 Again, this video has the green-screen, though this time, a more light-weight trampoline.

There are very few conclusions that can be drawn from the peculiarity of the releases of these videos, the absence of the complete recordings with only snips being revealed to the masses–even if the audio contains messages, this can be done over with music as NewsRescue does with its releases–but rather just few minutes and sometimes only stills from the purported videos are given to the public who are meant to believe the monster is still alive. Shekau is dead! As dead as Osama.