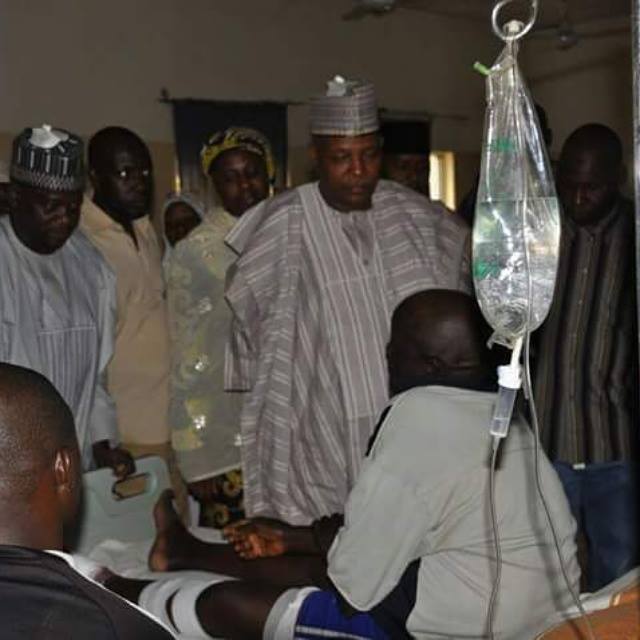 …as Shettima’s Vehicle Trapped In Desert For 30 Min

The Governor informed the displaced persons that he was setting up a Task Force on Evaluation, Reconstruction, Rehabilitation and Re-integration of Insurgency Victims with the mandate of assessing safety and damages in all liberated territories and commencing reconstruction works to ensure basic necessities of live such as water, healthcare facilities, access to food and shelter are made available in addition to fumigating all areas to guarantee health security given possible decomposition of bodies.

The four affected headquarters’ have however been liberated by joint muliti-national forces in separate rescue missions. Troops from the Republic of Chad reclaimed Malamfatori, their counterparts from Niger liberated Damasak while Nigerian troops reclaimed Baga and Monguno towns on different days, about two weeks ago.

Borno citizens who fled from the four local government headquarters and surrounding villages crossed into different parts of Niger Republic, Cameroon and Chad. On Niger Republic, citizens including nursing mothers, aged women and men, young men and women and thousands of children below ages of ten, took refuge in border towns of Bosso, Tumur, Kanchandi, Balanguwa, Shettimari, Kaulaha, Barwa, Chukujani, Yabi, Malamkauri, all in Diffa province which is the closest State to Nigeria through border areas in northern parts of Borno.

Some of the fleeing residents have spent four months in Niger Republic following attacks of villages they lived. They fled in different groups and times depending on when their comunities were attacked. Governor Shettima had about two months ago ordered the evacuation of fleeing citizens from Chad and Cameroon back to Maiduguri in Borno State and they have since been temporarily settled at some of the thirteen Government controlled camps established in Maiduguri as being managed by the State and Federal Governments through their emergency management agencies.

The Governor on Thursday drove to Niger in convoy with council chairmen and stakeholders of Abadam, Mobbar, Kukawa and Monguno local government areas.

Governor Shettima in company of the Governor of Diffa, Yacuba Usmana Gawo drove through sand dunes to a refugee camp in Gagamari, on the outskirts of Diffa town, where he met displaced persons mostly from Mobbar local government area.

The fleeing citizens who went on a wild jubilation on citing the Governor and their kinsmen where assured that their welfare would be improved upon. Shettima thanked the Government of Niger, especially the Governor of Diffa for opening doors for Borno citizens to take refuge at a desperate and trying time.

Shettima said the government and people of Borno State would forever remain indebted to the Government of Niger for offering protection and support to citizens of Borno.

The Governor informed the displaced persons that he was setting up a Task Force on Evaluation, Reconstruction, Rehabilitation and Re-integration of Insurgency Victims with the mandate of assessing safety and damages in all liberated territories and commencing reconstruction works to ensure basic necessities of live such as water, healthcare facilities, access to food and shelter are made available in addition to fumigating all areas to guarantee health security given possible decomposition of bodies.

The Governor announced to the happy though traumatized citizens, that all their four local government areas have been reclaimed by the multi-national troops from participating countries of Nigeria, Niger, Cameroon and Chad. The Governor announced a special welfare package for the displaced persons in cash that wasn’t disclosed but handed to camp officials.

On Friday, Governor Shettima’s convoy drove for about one hour, navigating through wheel dragging and safety threatening sand-dunes, across a thick desert to reach a camp located in Sayam, a border outskirt of Diffa town within the Province. He along with stakeholders met fleeing citizens also from Mobbar local government area. He gave assurances similar to those of his first interaction.

He presented medical equipment made of mostly anti-malaria drugs and mosquito nets as well as some test equipments received by officials at the camp which has the presence of United Nations High Commission for Refugees. The Governor then returned to Diffa town where he met with citizens of Abadam, Kukawa and Monguno local government areas with similar assurances and welfare treatsies.