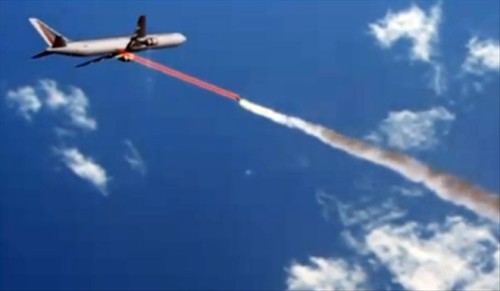 The plane is suspected of being hit by rebel fire

A Malaysian airliner reportedly carrying 295 people has crashed in eastern Ukraine near the Russian border.

The aircraft was travelling from Amsterdam to Kuala Lumpur, and all passengers on board are feared dead.

Malaysia Airlines said it lost contact with Flight MH17 from Amsterdam, the BBC reported. The last known position of the plane was over Ukraine.

There are concerns the plane was hit by a missile.

A senior Ukrainian official was quoted as saying the plane was shot down by separatist rebels.

Ukraine has been in turmoil for months, with recent fighting between the country’s new government and pro-Russian separatists in the east.

Rebels have shot down a number of Ukrainian military planes in recent weeks.

Analysts suggest the plane could not have been hit with a portable missile, given the altitude of 10,000 metres which it was travelling at the time.

The argument aligns with Ukraine’s accusation that Russian military has supplied advanced missiles to the rebels.

Earlier on Thursday, Ukrainian officials blamed the Russian air force for shooting down one of its ground attack jets on Wednesday.