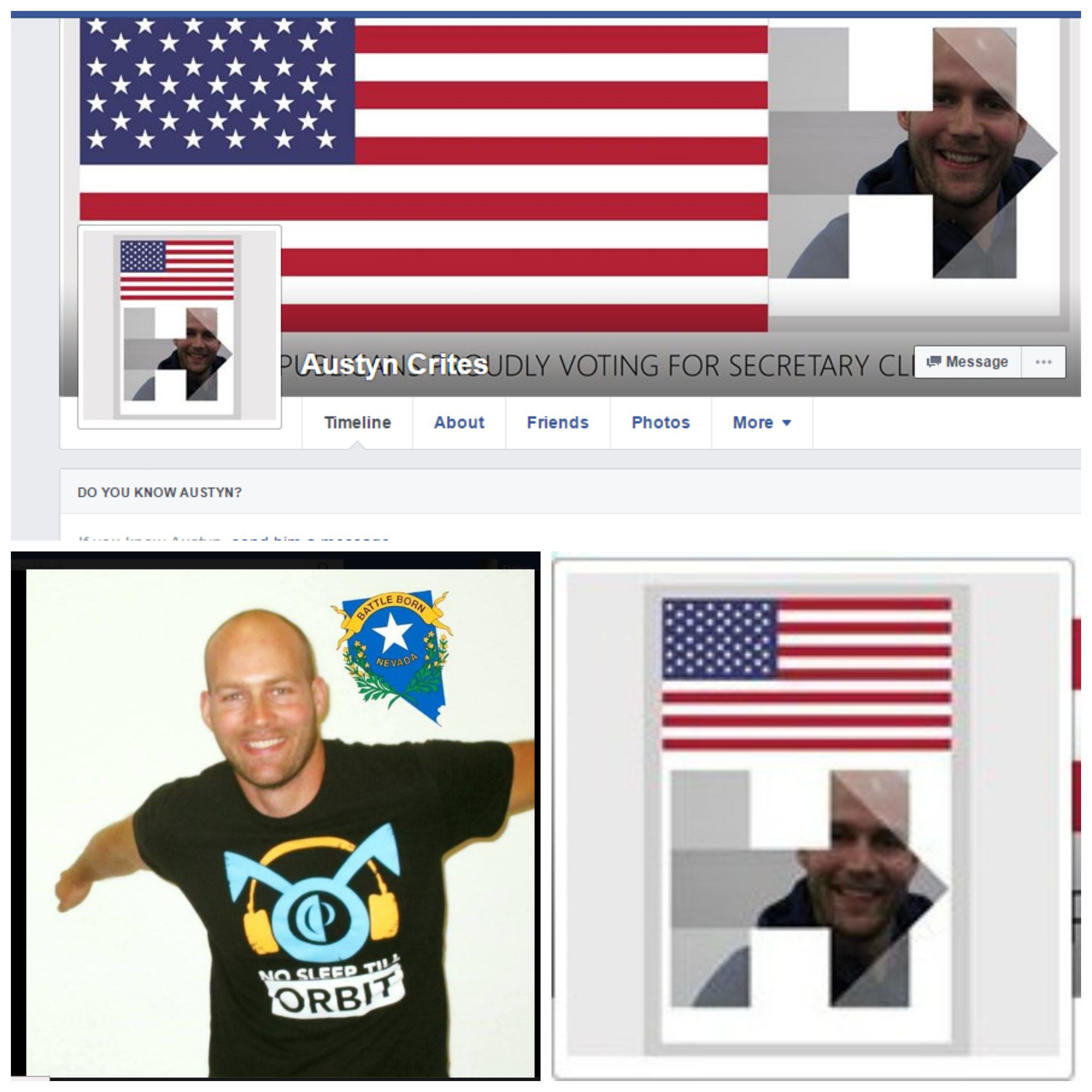 Although it doesn’t appear that Austyn Crites was trying to assassinate Donald Trump, it’s very interesting that he does appear in the Wikileaks dumps…not once but SEVEN TIMES.

However…these aren’t the Podesta Emails. These are the Global Intelligence Files.

On Monday February 27th, 2012, WikiLeaks began publishing The Global Intelligence Files, over five million e-mails from the Texas headquartered “global intelligence” company Stratfor. The e-mails date between July 2004 and late December 2011. They reveal the inner workings of a company that fronts as an intelligence publisher, but provides confidential intelligence services to large corporations, such as Bhopal’s Dow Chemical Co., Lockheed Martin, Northrop Grumman, Raytheon and government agencies, including the US Department of Homeland Security, the US Marines and the US Defence Intelligence Agency. The emails show Stratfor’s web of informers, pay-off structure, payment laundering techniques and psychological methods.

Let me repeat that:

And the man who disrupted the Trump rally is in them. To find his name, you have to open the Excel files attached to each leak.

First, it was reported that someone tried to assassinate Trump.

Last night in Reno, it was reported that Donald Trump was rushed off the stage at his rally.  Since Trump is disliked so vehemently by some, it was immediately assumed that someone tried to assassinate Trump. Initial reports were that someone rushed the stage, someone else yelled “gun,” there was chaos and tackling, and then someone was arrested.

Considering the insanity of this election cycle, who would actually be surprised if something like that were to happen? And given that insanity, it’s entirely reasonable that the Secret Service immediately hustled Trump off the stage until they could get to the bottom of what had occurred.

Thankfully, it appears that this was not an assassination attempt.

The person who was detained by authorities was Austyn Crites.

Things aren’t as they first appeared.

First off, no gun was found, even though two eyewitnesses claim to have seen one.

Secondly, Crites didn’t try to kill anyone. He was there, apparently voicing his dissenting opinion and protesting Trump. He was quickly released by police after being questioned. 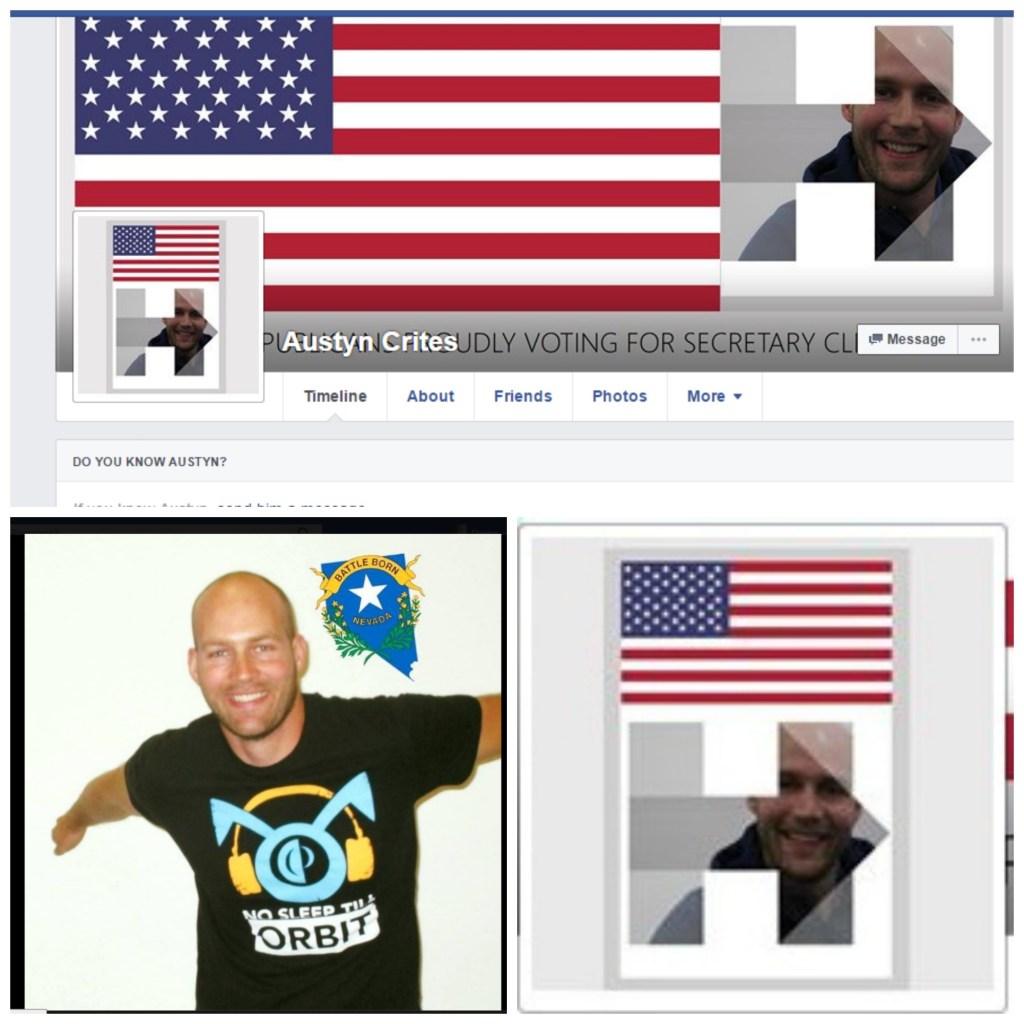 Crites’ original Facebook cover photo said across the bottom,  “Nevada Republicans Proudly Voting for Clinton.” Due to privacy settings, there was nothing visible on the original page previous to Sept. 19 of this year.

When I refreshed the page, it looked like this. Quick change, huh? There’s a reason I always take screen shots. 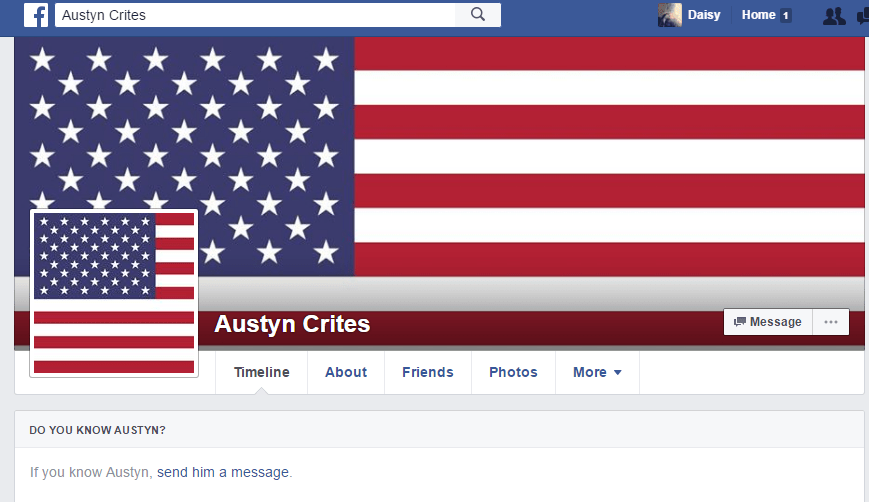 A quick Twitter search showed a reporter from the BBC had spoken to Crites. James Cook posted the following Tweet: 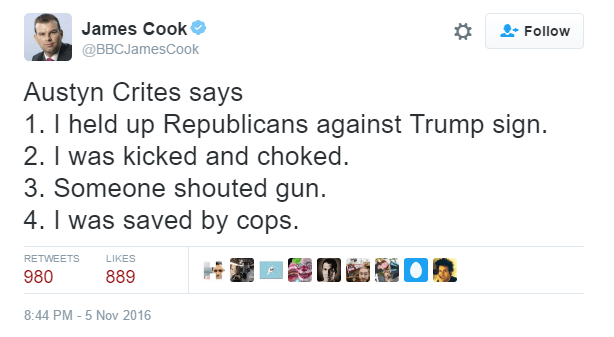 His only public Facebook post said, ““Time to get out and vote y’all! I understand that this election has people torn, but we must chose HOPE over HATE!”

When you put this all together, it’s pretty hard not to think about the Project Veritas videos.

The Project Veritas videos put Scott Foval and Robert Creamer in the spotlight, and both had FEC complaints filed against them due to their unscrupulous methods of “helping” the Clinton campaign.

Breitbart.com reported on this particular quote from Scott Foval, where he explains “bird-dogging”:

FOVAL: So one of the things we do is we stage very authentic grassroots protests right in their faces at their own events. Like, we infiltrate. And then we get it on tape. And then, when our guys get beat up —

PV: So like — progressive, what we saw in Madison.

FOVAL: We train up our people, wherever they are, to — and I work with a network of groups, we train them up on how to get themselves into a situation on tape, on camera, that we can use later.

PV: So some of this, so I probably know your work.

FOVAL: I know you do. Everybody does. But —

FOVAL: You remember the Iowa State Fair thing where Scott Walker grabbed the sign out of the dude’s hand and then the dude gets kind of roughed up right in front of the stage right there on camera?

FOVAL: That was all us. The guy that got roughed up is my counterpart, who works for Bob [Creamer].

PV: And so you, like leant yourselves to that situation and it happened. A self-fulfilling prophecy.

About 5 minutes after the incident, Trump gamely returned to the stage, where he graciously thanked the Secret Service agents and local police, then proceeded with his speech.

He issued the following statement:

“I would like to thank the United States Secret Service and the lawenforcement resources in Reno and the state of Nevada for their fast and professional response. I also want to thank the many thousands of people present for their unwavering and unbelievable support. Nothing will stop us – we will make America great again!” –Donald J. Trump