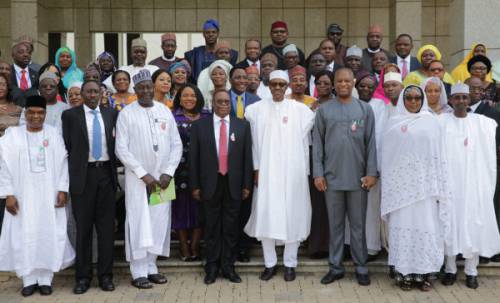 No fewer than 15 recently confirmed ambassadorial nominees are at the end of their public service careers, SaharaReporters has learnt. Some of them are due for retirement this year.

The trio of Messrs. Liman,  Nwachuku and Inusa, SaharaReporters reliably gathered, are due to retire in June 2016.

The fact that public servants nearing the end of their careers have been nominated implies that their stay in countries to which they are posted will be brief. A major reason for this is that it takes between three and six months to obtain the consent of countries to which they are posted. In the likely event of this, the three officers may have retired before they are accepted by the countries of their proposed accreditation.

To forestall a repeat, India stated that it will no longer accept an ambassador that has less than three years to retire from service or enough time to end the term of the appointing president.

One of the requirements for the nomination of career officers for ambassadorial appointments is that such officers must have a minimum of 36 months in service before retirement.

However, this requirement was jettisoned to accommodate nominees of Ambassador Baba Gana Kingibe (Gashagar from Borno State) and the then Permanent Secretary, Ministry of Foreign Affairs, Ambassador  Bulus Zom Lolo (Duchi from Kaduna State).

A report by SaharaReporters had drawn attention to the lopsidedness in the nomination process within the career officer cadre. The process saw three officers nominated from Borno State (home state of Kingibe and Mr. Abba Kyari, Chief of Staff to President Muhammadu Buhari).

Bizarrely,  showed the report, there were no nominees from Bayelsa, Ondo and Plateau states. The evidently lopsided process sparked a heated debate at the Senate during the screening exercise. When the dust settled, each of Borno, Kano, Katsina and Kaduna states had four nominees confirmed, with only one each from Ondo, Plateau and Bayelsa states.

Career Ambassadors in a group photo with President Muhammadu buhari

A source told SaharaReporters that the decision of the Federal Government to send out soon-to-retire officers is viewed as a great disservice to the Foreign Service. The source also disclosed that career officers are already angry with the Federal Government for stopping the payment of their Domestic Service Allowances and irregular payment of salaries. Their sense of grievance against the government, added the source, will increase with the decision to nominate soon-to-retire career officers.

“In addition to stopping the payment of Domestic Service Allowance, the current Federal Government lags behind in payment of Foreign Service Allowances and salaries. In New York and Washington DC, local staff are owed three months’ salaries. Those in Paris, Dubai, New Delhi and Brussels are owed two months,” disclosed the source.

Another source told SaharaReporters that diplomatic staff in Guangzhou (China) Athens (Greece) and Brasilia (Brazil) are being owed allowances of up to six months. He also disclosed that some of the diplomatic missions have been forced to close their chanceries because of non-payment of rent.

“This is the case in Guangzhou, Athens, nd Sao Paulo. On the other hand, the newly appointed Consuls-General in Guangzhou and Dubai have been staying in hotels since January. The government has no clear foreign policy direction. The Foreign Affairs Minister has reduced the Ministry into a shadow of what it was,” he said.

He added that the failure of the Federal Government to pay diplomatic staff salaries and allowances and the decrepit conditions of their offices have bred hostility to Nigerians, whom they are supposed to be serving.