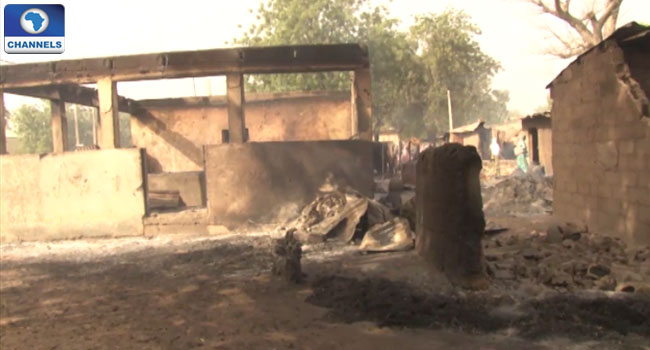 President Muhammadu Buhari sent a delegation of officials yesterday to Maiduguri, the capital of Borno State, to condole the people of Borno after last weekend’s attack.

The Borno State Deputy Governor, Usman Mamman Durkwa, received the delegation led by the Secretary to the Government of Federation Mr. Lawal Babachir. He was accompanied by three cabinet ministers who arrived at Maiduguri International Airport and proceeded to Dalori village, about 5km from the capital’s center.

Dalori village was invaded last weekend by Boko Haram terrorists where 85 people were reportedly killed. The village was completely destroyed according to reports and foodstuffs were looted by the terrorists who managed to escape.

Mr. Babachir led the delegation to assess the level of damage inflicted on Dalori and promised that the Federal Government will aid the residents and victims of last week’s attack.

He said “I am here with three other Ministers on directives of Mr. President Buhari, who is in Europe, to come and condole the people of Borno over the unfortunate incident here.”

“[We have come] to see the level of damage for ourselves with a view to address the hardship that people suffer from. The Federal Government will address these problems,” he added.

The delegation also visited the victims at University of Maiduguri Teaching Hospital and State Specialist Hospital Maiduguri, as well as paid a courtesy visit to Government House in Maiduguri.