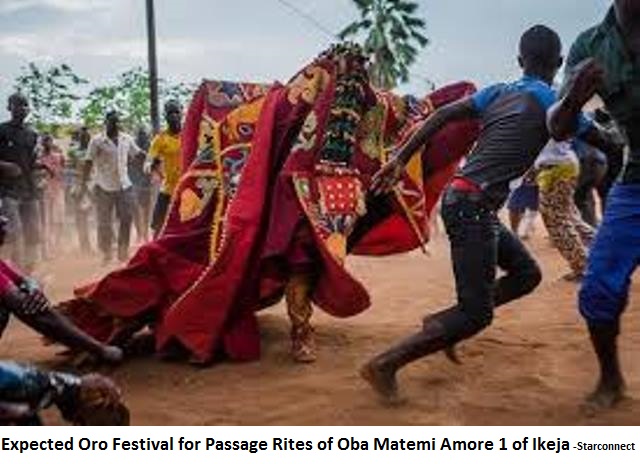 There is panic and advised restriction of movement in Ikeja due to burial rituals which according to a circulating rumor, include the slicing off of 7 heads to be buried alongside the late Oba. The Oba of Ikeja passed last week Tuesday as contained in this PMNews report:

The Olu of Ikeja Kingdom, Lagos, southwest Nigeria, Oba Rauf Adeniyi Aremu Matemi, is dead. He was said to have died in his palace Tuesday after a brief illness.

All businesses and shops at Ikeja local government were closed down for business as a mark of honour for the departed monarch.

However, commercial vehicles and tricycles (Keke Napep) operators were seen going about with their businesses.

When P.M.NEWS visited the palace Wednesday morning, traditional rulers, Iyaloja, Baales, members of the Hausa community were there to mourn the monarch.

Some rituals were also being performed in his honour at the palace. Some traditional chiefs were seen wearing white wrappers as well.

When our correspondent tried to know the cause of his death, one of his chiefs who did not disclose his name, said media cannot be entertained as at the time of filing this report, adding that there are some rituals that needed to be carried out first.

“We can’t talk to the media now. There are some rituals that needed to be performed when an Oba dies and that is more important than what you came for.

“See, we don’t announce the death of a king on the pages of newspapers. By 3:00 p.m. your paper would have been out while we are yet to properly inform some Obas (monarchs) of his demise,” he said.

The below message has been circulated in this regard. We are unable to verify the credibility of this deadly beheading ritual and it still being observed.

Please be informed that the Oba of Ikeja went to be with his ancestors on Tuesday and because of this, movement especially at night for those living within Ikeja and its environs especially Anifowose, Obafemi Awolowo Way, Alausa, Mobolaji Bank Anthony Way, Ipodo, Computer Village, Oba Akran and Ikeja GRA  should be restricted until he is buried.

The Oro Cult will be coming out every night to pay homage until he is buried.

You are advised to get back home early and stay indoors if you live in these vicinities.

Please advise relations and friends who might be coming into these area of Lagos to exercise caution. Also be mindful as you step out very early in the morning to work.