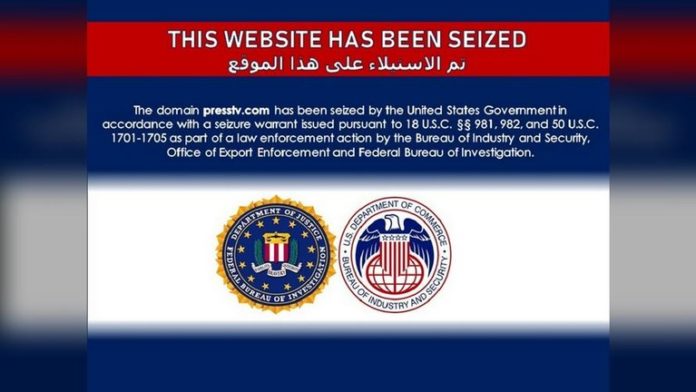 US authorities have seized the web domains of Iran’s international media outlets Press TV and Al-Alam, along with the Yemeni TV channel Al Masirah, run by the Houthi faction, an Iraqi Shia satellite channel, and others.

NewsRescue analysts describe this move as an extreme “stick” hit from the carrot-and-stick approach, to pressure Iran on ongoing Nuclear talks. Such drastic approach was not seen under the predecessor Trump administration. Iran billions seized under the Trump administration have also not been released.

Visitors to the PressTV.com and a number of other websites were greeted on Tuesday with a notice that they were seized under US laws that allow civil and criminal forfeiture of property involved in “trafficking in nuclear, chemical, biological, or radiological weapons technology or material, or the manufacture, importation, sale, or distribution of a controlled substance.”

“Pursuant to court orders, the United States seized 33 websites used by the Iranian Islamic Radio and Television Union (IRTVU) and three websites operated by Kata’ib Hizballah (KH), in violation of U.S. sanctions,” the agency said in a statement, adding that “components of the government of Iran, disguised as news organizations or media outlets, targeted the United States to subvert U.S. democratic processes.” – US Justice Dept, Tuesday June 22nd 2021

The seizure notice by the US Department of Justice also invokes a law governing presidential authority in dealing with “unusual and extraordinary threat; declaration of national emergency,” which includes the Iran Nonproliferation Amendments Act of 2005 and the ironically named Iran Freedom Support Act of 2006.

Going to @PressTV's website gives this message now. The US codes cited are civil & criminal forfeiture and powers given to the US president during a national emergency. pic.twitter.com/XY0WJd1SN6

#BREAKING: in addition to #Iran IRIB's Al-Alam, the U.S. government has seized Al-Masirah's news website, which is associated with the #Houthis in #Yemen. pic.twitter.com/9YDGA2u05p

Launched in July 2007, Press TV is the international English-language service of the Islamic Republic of Iran Broadcasting (IRIB), Tehran’s state media agency. Al-Alam goes back to 2003 and is broadcast in Arabic, Farsi and English to audiences in the Middle East and the Mediterranean.

Al-Masirah is not owned by Iran, but by Ansarullah – the movement of the Houthis in Yemen, a faction the US has accused of being “proxies” of Iran on account of them being Shia Muslims and resisting the invasion of Yemen by Saudi Arabia since 2015. The TV channel is headquartered in Beirut, Lebanon.

Neither the US nor the Iranian authorities have commented on the seizures just yet. Meanwhile, the NGO Yemen Solidarity Council (YSC) condemned “the deliberate silencing of the Yemeni voice by the American regime.”

In a statement released through the YSC, Al Masirah said it was “not surprised” by the apparent seizure, as it “comes from those that have supervised the most heinous crimes against our people.”

The“ban” on the website “reveals, once again, the falsehood of the slogans of freedom of expression and all the other headlines promoted by the United States of America, including its inability to confront the truth,” the outlet said.

STATEMENT BY #ALMASIRAH MEDIA NETWORK ON THE CLOSURE OF ITS WEBSITE BY THE US FEDERAL BUREAU OF INVESTIGATION:

"We in the Almasirah are not surprised by this decision, as it comes from those that have supervised the most heinous crimes against our people". pic.twitter.com/YFB1UGuRXj

PressTV only said that a seizure message has appeared “on the websites of a series of Iranian and regional television networks” in “what seems to be a coordinated action.”

Another site that displayed the seizure notice on Tuesday was that of Al Forat Network, an Iraqi satellite TV outlet owned by a Shia Muslim cleric and politician Ammar al-Hakim.