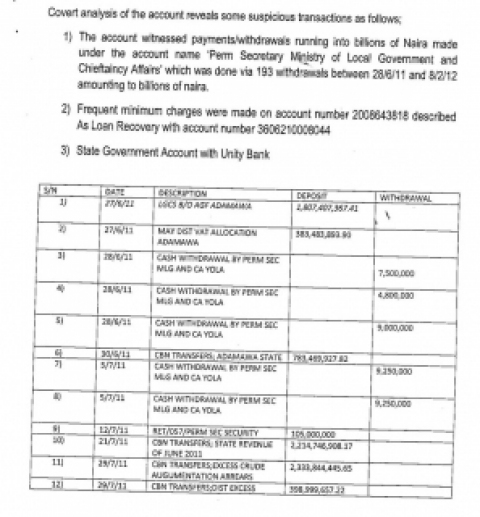 The Economic and Financial Crimes Commission (EFCC) has arrested several key officials of the Adamawa State government, including the Secretary to the State Government (SSG) and a serving commissioner, in connection with the state’s frozen accounts.

Our source within the commission explained that the action was not a political vendetta but to halt the ongoing looting of the state treasury for which it has evidence gathered in a current investigation.

That investigation, according to the source, began from a petition from within the state which alleged massive looting by Governor Murtala Nyako and people close to him.

Although the EFCC did not make the petition available to SaharaReporters, the source said the matter involved an illegal department called Special Programme and Project Units (SPPU) which was accused of over-invoicing and contract-inflation.

It was also learned that other officials of the Ministry who allegedly looted the Joint Account include Justina Jari, a Principal Accountant with the ministry who made cash withdrawals to the tune of N600 million from the Joint Account between October,  2009 and February, 2011. Another member of staff of the ministry, Abdulhakeem Mohammed, was also alleged to have withdrawn about N3 billion from the account between February, 2007 and May, 2011.

Two other staff, Mercy Wanje and Jumai Salihu were respectively alleged to have made withdrawals of N1 billion and N160 million from the account as well.

“On a single day, another staff called Haruna Hamali, a principal store officer made a cash withdrawal of over N70 million from the same account,’ the source said, adding that in addition to confirming those withdrawals, the interrogated officials also confirmed that the money was returned to top officials of the state government.

It was on account of those developments and other ongoing investigations that the state officials were arrested, the source concluded.

Contacted, the spokesman of the EFCC, Wilson Uwujaren, confirmed the freeze order, but declined to comment on specifics.

The allegations of looting as well as revelations of arrests come on the heels of yesterday’s filing of impeachment motion by the Adamawa House of Assembly against the governor and his deputy.

“The swift action of the EFCC in this matter is commendable,” said a newspaper columnist.

“But it all seems to be so conveniently aligned to the political dictates of one Mr. Goodluck Jonathan, doesn’t it?  Citizens, newspapers, critics, whistleblowers, patriots, even foreigners have been sending well-documented petitions to the EFCC since 2007 that it has conveniently ignored.  Some of those petitions involve people at the very highest levels of the current government, such as the Attorney General/Minister of Justice, Mr. Mohammed Adoke, and the Minister of Petroleum Resources, the one with the owl eyes, Diezani Alison-Madueke.  Is the EFCC saying that those two will be under arrest this weekend?”

Another political analyst pointed out that there have been several investigations by newspapers and online publishers such as SaharaReporters and Premium Times that involve looting in various states of the federation, but that in none of them has the EFCC taking an interest, let alone done anything as swiftly as it is doing in Adamawa State.

“While I am in no position to challenge the facts being advanced by the EFCC, it is clear that it is only with specific instructions from the presidency that anything of this nature, and with this speed, can happen,” he said.  “A dog does not need to kill itself: you simply give it a bad name, and people step forth with machetes and bows and arrows.”