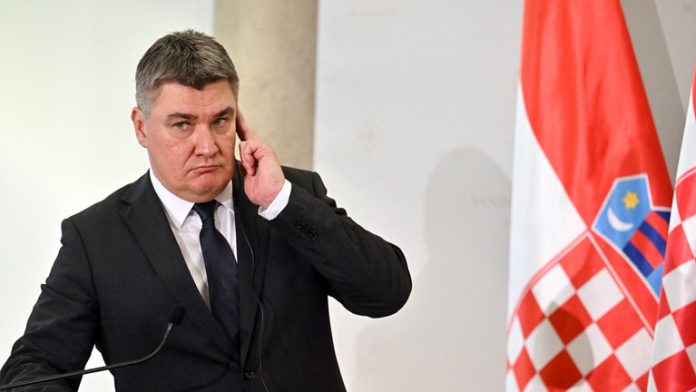 Croatian President Zoran Milanovic chastised the European Union for treating its citizens like retarded children, telling reporters on Friday that his tolerance for such behavior had reached its limit.

When it came to Croatia’s participation in the peacekeeping mission in neighboring Bosnia, Milanovic had some choice words for EU foreign policy commissioner Josep Borrell during a joint press conference with Hungarian President Katalin Novak in Budapest.

“Borrell sent Croatia a lie-filled memo last month in which he treats us as if we were retarded – excuse my language, as if we had special needs – in order to prevent us from even having a symbolic presence in the Althea mission. “I’m trying to be polite, but there comes a point when enough is enough,” he said.

“This type of treatment is extremely irritable,” Milanovic added. “Today they do this to Hungary, tomorrow it will be some other, bigger country they want to bring into line. They also did it to Poland until recently. Poland has a pass for the time being due to the situation in Ukraine, but their turn will come again tomorrow.”

Brussels has attempted to compel the governments in Warsaw and Budapest to accept EU migration and “rule of law” policies by threatening to withhold funds that Poland and Hungary were legally entitled to.

The way Brussels treats member states is one of the EU’s biggest problems, according to Croatia’s president.

“I believe Croatia and Hungary fall within the framework of European values, which cannot be the same for every state,” Milanovic explained. “If the EU is to progress, it must accept diversity.” The current Brussels approach is “seriously problematic,” he added, noting that it may soon be tested on a member state larger than Hungary, which the EU will be unable to treat in the same way.

Milanovic also addressed the backlash to his earlier this week comment, in which he called the Ukrainian conflict a “proxy war” against Russia, for which he was praised by Russian Foreign Minister Sergey Lavrov.

“When I refer to it as a “proxy war” in which Ukraine is the primary victim and only Washington and Moscow can reach an agreement, I am simply paraphrasing Ukraine’s current defense minister, who stated that NATO is fighting Russia with Ukrainian blood. “However, no one wants to hear that,” Croatia’s president said. “I will not let us be turned into a little dog that just goes around in a big pack barking.”