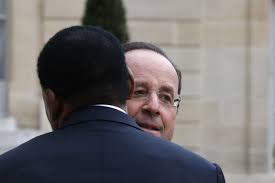 The former French African colony of Niger is facing famine – yet again – with international aid agencies reporting this week that up to one million people are currently without access to food.

It is the fourth such crisis to wrack the West African country in recent years, when famines struck similarly in 2012, 2010 and 2005. The immediate cause is extreme climate that has hit crop harvests. But the root cause is the deliberate underdevelopment of Niger under France’s parasitical neo-colonialism.

Ironically, this chronic underdevelopment and poverty in Niger, and Africa generally, is a cornerstone for France’s own national development and wealth creation.

Niger has a land area twice the size of France, with a population of only 17 million – a quarter of France’s. Much of the Sahelian country is arid and hostile to agriculture. But given its relatively small population, Niger should be a wealthy nation owing to its other vast natural resources.

It is the world’s fifth top producer of uranium ore – after Kazakhstan, Canada, Australia and Russia. Niger has also other mineral riches, including gold, iron ore, molybdenum, tin, salt, gypsum and phosphates – and what are reckoned to be huge untapped oil and gas reserves.

Yet despite all this natural wealth, Niger is officially the poorest country on Earth. According to the United Nations Human Development Index for 2012, it is ranked the lowest out of 186 nations.

The explanation for this anomaly is that Niger’s chronic condition of underdevelopment, poverty and hunger is a result of politics – French politics to be precise.

Like many other African countries, Niger gained official independence from France in 1960. But, as with other former colonies, its newfound «freedom» soon proved to be illusory.

For the past six decades, Niger has been kept enslaved under the French monetary system known as the «African Franc». The currency was imposed on more than a dozen former French colonies, including Cote d’Ivoire, Burkina Faso, Benin, Chad, Mali and Niger, as a condition for their political «independence».

Paris dictates that all member countries must deposit their annual revenues with the French Treasury, from which the former colonies can draw down borrowing – but they are charged financial interest for this dubious «privilege». Meanwhile, the French government allows itself to use this African money to invest in its own companies – interest free.

France also unilaterally determines the exchange rate for the African Franc against the Euro and other international currencies.

In this way, France has been able to continue its rapacious exploitation of Africa as if it were back in the colonial heyday of the 19th and early 20th Centuries – only now under the politically correct guise of «independent nations».

The financial and economic looting of Africa means that resources are extracted at the lowest cost to France, which can then export products back to its former colonies at the highest price. The upshot is that Africa is caught in a poverty trap of underdevelopment and hunger – as we are witnessing now in Niger – even though the continent has some of the most abundant resources on Earth.

A measure of Niger’s forced underdevelopment is this: apart from uranium ore, the other major exports from the country are livestock, cowpeas and onions. In other words, the county – despite its vast natural wealth – is stunted and crippled. And France wants to keep Niger crippled, economically and socially, because it ensures that France can exploit the country at will and in particular for the strategically vital uranium ore.

Some 80 per cent of France’s national energy supply is derived from nuclear power generated at 59 plants operated by state-owned Electricite de France. About one-third of France’s total annual supply of uranium ore for its power stations is sourced from Niger. The French uranium-mining company, Areva, has mines across Niger, guarded by French Special Forces.

Electricity supply is perhaps the main determinant of a country’s overall development. So, while French citizens can enjoy ubiquitous electricity, and all the social development that goes along with that, it is on the back of widespread poverty and human suffering in Niger.

Areva is the world’s second biggest uranium-producing company with annual profits of €430 million. Earlier this year, the firm said it was spending a tenth of this figure on upgrading security at its main mining site in Arlit, Niger, after militants bombed the plant in May. That attack prompted French Foreign Minister Laurent Fabius to visit, where he warned against the specter of «terrorism across Africa».

It was from the Areva mine in Arlit that four French employees were kidnapped by militants, believed to be linked to Al Qaeda in the Maghreb, back in late 2010. The hostages were returned to France at end of last month after French authorities reportedly paid a €20 million ransom.

Putting these figures into some perspective, when Niger experienced a previous severe famine in 2005, Areva reportedly donated €250,000 for «humanitarian relief» across the entire country – some 0.06 per cent of the company’s annual profits, or 1.3 per cent of what France paid in ransom for the release of four of its nationals, or less than 1 per cent of what Areva spends on «securing» its properties in Niger.

To the west of Niger is Mali, another former French colony, which is also believed to possess lucrative deposits of uranium ore – although as yet untapped.

When France launched its military invasion of Mali in January this year, President Francois Hollande claimed that his country was protecting Mali’s sovereignty from insurgents and «terrorists». At the same time that 3,000 French troops landed in Mali, it was scarcely reported but French Special Forces were also dispatched to tighten security at Areva’s mines in Niger.

Terrorism, like poverty and hunger, has roots. These roots are traced all the way to Paris, where neocolonial policy has worked to ensure that French national development and wealth for its elites has been built on ruthless and relentless exploitation of Africans, over many decades to the present day.

As one million people now face starvation in Niger – the poorest country on the planet that otherwise should be one of the richest – oblivious French politicians, reclining in Elysée Palace, will no doubt be toasting their glasses of fine wine over fine food, and arrogantly chortling: «Vive La France!»