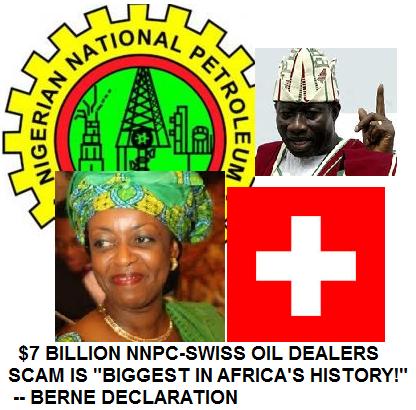 Zurich/Lausanne, 04.11.2013  – Every year Nigerian state coffers lose billions of dollars as large volumes of oil are exported for well below market price and the subsidy scheme for imports of refined crude oil products is systematically defrauded. Thanks to opaque joint ventures with the national oil company, market-dominating Swiss commodity majors Trafigura and Vitol profit from these corrupt market practices. And Mercuria and Geneva-based Nigerian subsidiaries appear to be in on the action, too. An explosive BD report demonstrates why greater transparency, similar to that just announced in Britain, is urgently required.

Although Nigeria is the leading crude oil producer of the continent, life expectancy and school attendance for the 173 million citizens of this West African state is nevertheless below the average for South Saharan countries. The all-powerful Nigerian National Petroleum Corporation (NNPC) plays a significant role in maintaining the “resource curse” here. Thanks to exclusive and intransparent partnerships with this national oil company, Trafigura and Vitol are able to dominate Nigerian oil exports with over 26% of market share. These findings are supported by the BD research. If you include the Swiss subsidiaries of Nigerian firms in the calculations, market share rises to 56%, representing some 14 billion dollars. According to investigation reports, Nigerian oil is often sold below market value. No wonder that Vitol in a compromising letter from NNPC was told that oil should be sold in the near future “at competitive prices”. The common use in these transactions of opaque agreements and links with companies registered in tax havens only serves to heighten the suspicions of corruption.

The lack of its own refining capacity forces crude oil-rich Nigeria to import gasoline, kerosene and heating oil. This paradoxical import business is heavily subsidised, and has led to one of the greatest frauds Africa has ever known: from 2009 to 2011 alone, companies involved in this business received some 6.8 billion dollars in unjustified subsidies. Ongoing investigations by the Nigerian authorities show that those Swiss traders dominant in oil exports have been making good business with dubious Nigerian import firms. Upon closer inspection, it turns out that some of these import firms do not actually carry out any operational activities, or are, as is the case with some of Mercuria’s partners, in the hands of politically exposed persons. Accordingly, five Geneva trading firms are currently the subjects of requests for mutual assistance to Switzerland from the Nigerian authorities. In addition, the BD report shows that at least seven of the Nigerian importers implicated in this major fraud have subsidiary companies in Switzerland.

The Nigeria case illustrates the enormous impact Swiss commodity traders often have on a developing country. It is therefore up to Parliament and the government to ensure that these companies do not take part in such abusive behaviour. This is why as an absolute minimum the following three steps towards greater transparency and due diligence are urgently needed:

The British government announced last Thursday that it plans to create a public register of ultimate beneficial owners, the first country ever to take such a step. At the same time, the government also made known its intention to implement the EU transparency regulations in the commodity sector next year.

Who is the Berne Declaration?

We are a Swiss non-governmental organization with more than 20,000 members. We have been promoting more equitable, sustainable and democratic North-South relations since 1968. To this end, we carry out research, run campaigns to raise public awareness of different issues and do advocacy work.

What areas are we involved in?

The Berne Declaration is currently working on the following issues: