NewsRescue– According to an expose by SaharaReporters, corrupt NANS (National Association of Nigeria Students) leaders are hawking awards to Nigerian politicians for a fee.

The letter attached is one such letter being sent by NANS. 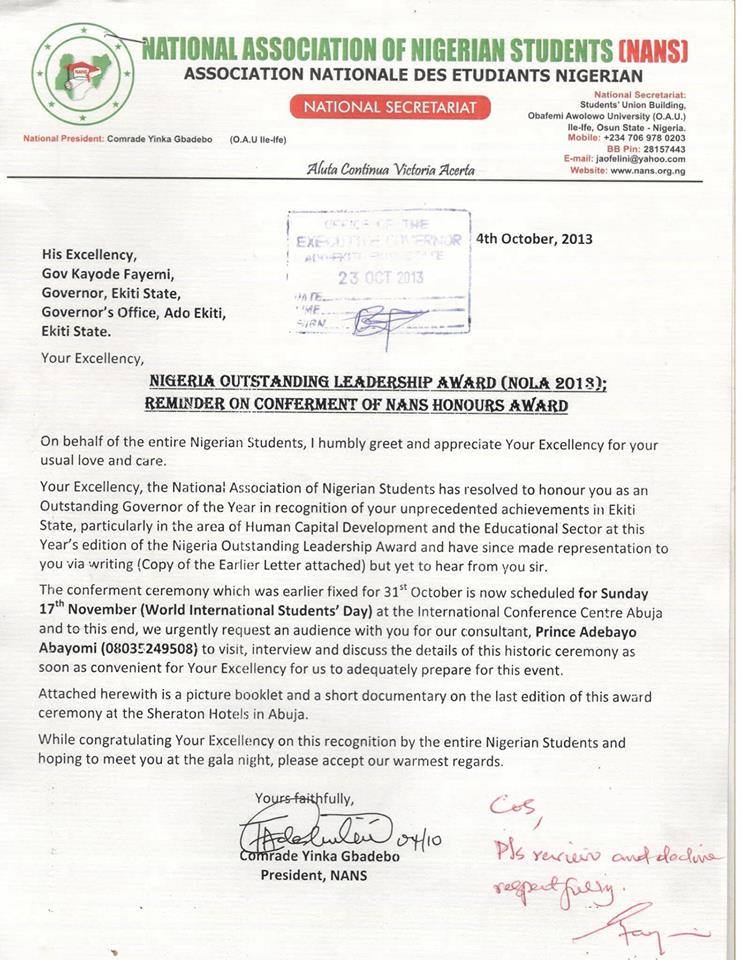 But somewhere along the line, somehow, it appears the shameless and betraying acts of NANS leadership took a twist in the case of the particular letter example above.

There appears to be a squabble between NANS leadership and governor Fayemi. Perhaps the governors rejection of the “award” led to NANS leadership blackmail.  AbuSidiqu reports:

The furore that has started since Wednesday, 6th November when the National President of the National Association of Nigerian Students (NANS), Comrade Yinka Gbadebo criticised Governor Kayode Fayemi of Ekiti State over the killing of Foluso Ogundare at Emure Ekiti in Emure local government area of the state took a strange dimension this evening as the National Secretariat of  NANS accuses Fayemi of forging the letter headed paper and the signature of its National President in a bid to discredit its leadership because he condemned him over the killings and the abuse of human rights in the state.

The media aide to one of the senators representing the state in National Assembly, Babafemi Ojudu, Mr. Dimeji Daniel had uploaded a letter allegedly written to Fayemi by Gbadebo, saying that Gbadebo hide under the killings in Ekiti to chastise Fayemi because the latter was aggrieved over the refusal of Fayemi to accept the letter written to him on the 4th of October, intimating him of the decision of the association to honor him with an outstanding leadership award.

The association stated in a statement made available to newsmen on Monday evening in Abuja by its National Public Relations Officer, Comrade Victor Ola-Ogun that Fayemi’s resort to forgery has shown how desperate he has unfortunately become in his bid to circumvent truth and assassinate decorum. Ola-Ogun said the letter headed uploaded on social media and the signature on it does not belong to its President.

“That letter headed paper does not belong to my president. The signature on the letter headed paper is not that of my president. We never have Fayemi on the list of our awardees for the second edition of the Nigerian Outstanding Leadership Award. It is a big fraud that will not be left unattended to, as we will upload the original letter headed paper and the signature of the president on the social media tomorrow,”-Ola-Ogun, averred. Ola-Ogun however said the association will consult its lawyer after its national executive council meeting  on wednesday 13th November to know the next line of action.