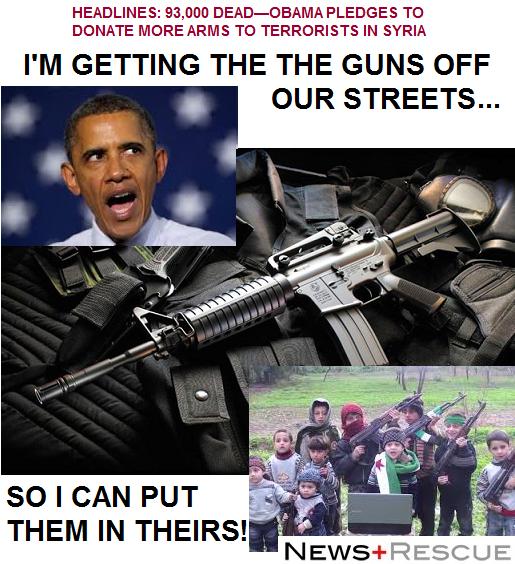 A new video has emerged of an FSA rebel would-be suicide bomber vowing to attack the US and Europe once he is finished in Syria, underscoring once again how the Obama administration is openly arming terrorists who hate America.

The clip shows an interview with a would-be suicide bomber who failed in carrying out his planned attack. After the man has recovered from his injuries he vows to return to fighting for the western-backed FSA in Syria before then traveling to Europe and America.

In addition to helping get “Sharia (law) established in all the countries,” the rebel promises to go on to Europe and America to carry on his jihad.

“He must go to America, to Europe, and it is (the) next step for him,” states the translator, adding that the rebel also wants to kill all Christians and Jews, as well as all non-Sunni Muslims, in pursuit of establishing Sharia law in Syria, while any who remain afterwards will be forced to pay a tax.

The would-be suicide bomber’s warped doctrine is by no means a minority view. We have documented innumerable examples where FSA rebels, whom the Obama administration is now officially supporting with heavy weaponry, have openly declared their allegiance with Al-Qaeda terrorists while committing a series of brutal atrocities.

– A top FSA General recently told Al-Jazeera that the FSA is co-operating with Al-Nusra.

The fact that Syrian rebels are being led by and are espousing the same extremist ideals as Al-Qaeda terrorists has now been proven in triplicate, yet western governments are still marching forward with deranged programs to arm the very same jihadists who on numerous occasions have openly announced their plan to turn those weapons on the west as soon as they are finished in Syria.