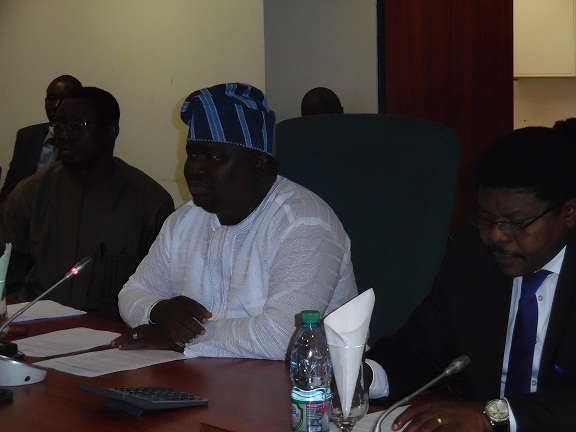 Fake doctor and president of Nigeria, Goodlcuk Jonathan has been accused of the most massive fraud yet by house reps: he is accused of aiding the subversion of 16 trillion naira out of 20 trillion annual budget that goes unregulated to government ‘super’ offices.

The House of Representatives said it has uncovered what may turn out Nigeria’s biggest fraud yet, accusing the Jonathan administration of spending N16 trillion on its super offices yearly, while the entire country is given a meagre budget of about N4 trillion.

The claim was made Sunday by the House Public Accounts Committee.

The committee said while the Nigerian government complains of revenue for key projects, the same government has allowed dozens of powerful offices, graded as “statutory and extra-ministerial departments” to spend a minimum of N16 trillion yearly.

The amount spent by the offices are not regulated, audited or appropriated by the National Assembly.
Much of the figure are generated by the respective offices and are deployed at the whims of their chief executives.

The revelation came as part of an ongoing examination of finances of government and its 601 agencies, the House committee said.

The committee, which spoke through its chairman, Adeola Solomon-Olamilekan, on Sunday, said when combined with Nigeria’s official annual expenditure, the country spends over N20 trillion yearly.

Mr. Solomon-Olamilekan said the N4.3 trillion budget for 2015, amid an oil crisis, is a “far cry” which does not include the finances of “statutory and extra ministerial departments” which have been running “about N16 trillion” without public auditing.

“The N4.9tn, N4.6tn or N4.3tn, as the case may be, is the budget that the whole Nigerians are listening to but in the true sense of it, the budget of other statutory and extra-ministerial departments put together is about N16tn,” he said.

“So, the total overall budget year in year out is over N20tn, which the executive arm operates, but nobody is asking questions as to the implementation of all these budgets.

“Nobody is bringing information on the implementation of all these budgets; and this is one area Nigerians need to start asking questions in order to move this country forward,”‎ he said.

The House committee said the federal government has encouraged the fraud to continue by deliberately refusing to fund the office of the Auditor General of the Federation, to weaken its capacity to check the violation.

The committee said by reducing the budget of office of Auditor General from N1.9‎ billion to N100 million in 2015, the government deliberately ensured the office no longer had the capacity to audit 601 departments and 144 foreign missions.

The big cut was carried out by the Ministry of Finance, citing falling oil revenues.

“How can we imagine that the capital budget of the office of AGF for the year 2015 was reduced from N1.9bn to N100?

“So, there is nobody to audit the revenue generated and the expenditure they incur.

“The office of the AGF has been short-changed and the budget has been reduced to nothing. As such, the government of the day is having a field day to carry out whatever its wants to do because they know they have an office that is not functioning,”‎ Mr. Solomon-Olamilekan said.