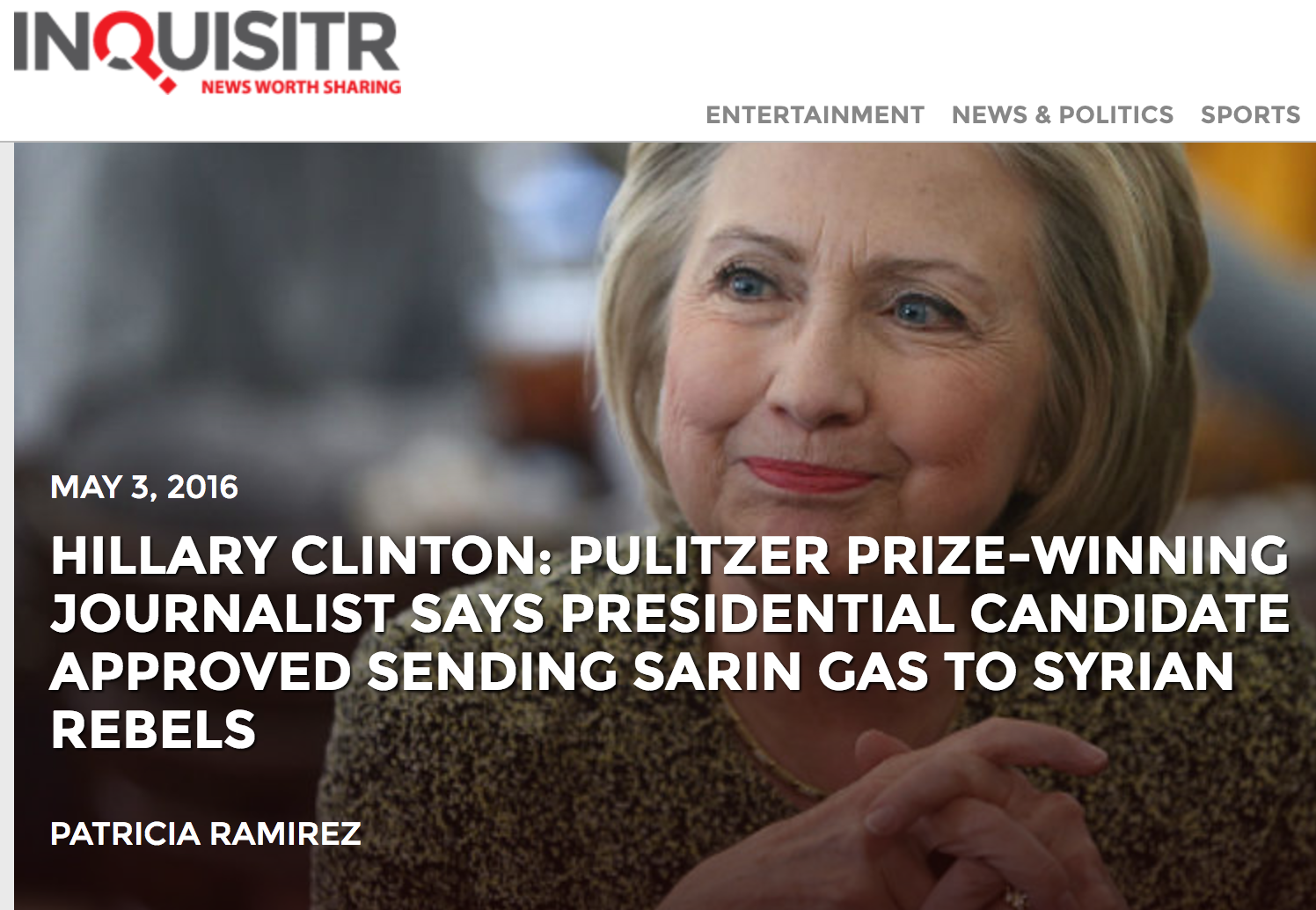 Here is what we know:

1. The United States was quick to lay the blame for what is claimed to have been a chemical attack in a province of Idlib (Khan Shaykhun) under the control of Al Qaeda – ISIS.

2. In 2014, then President Barack Obama conceded that Assad destroyed all of Syria’s chemical stockpiles under the supervision of UN inspectors and the Organization for the Prohibition of Chemical Weapons (OPCW). The Americans even paid for the process of destroying those weapons.

3. ISIS and Al Qaeda do have chemical weapons. There was a large chemical lab at the University of Mosul. Those who served in Saddam Hussein’s chemical forces developed these weapons. Mosul feel under ISIS control and has been for a significant time period.

4. The chemical attack, and Washington’s subsequent statements on Assad, came at a time when the “moderate rebels” (aka Al Qaeda – ISIS) in Syria were struggling to maintain their hold on various land in Syria. With defeats mounting against them…suddenly a chemical attack out of nowhere springs up.

British security analyst and counterterrorism expert, Charles Shoebridge told RT that Assad was unlikely to have ordered such an attack since the SAA has already turned the tide of the Syrian conflict.

“The people who have benefited from this kind of attack are the rebels themselves because they have gained a major political advantage at a time when they are struggling both strategically and geopolitically,” he said, adding that Damascus-led forces would have hardly opted for such tactics since they are on a roll “across Syria.”

The analyst also pointed out that such incidents fall into a certain pattern “taking place at critical moments from a geopolitical perspective.” He mentioned that a chlorine attack took place in Ghouta, a Damascus suburb, in August 2013 at the time when UN inspectors arrived in the Syrian capital. Another chemical attack took place in September 2016 shortly before “a major conference in London, where the Syrian opposition met with its foreign donors.”

How is this connected to Hillary Clinton…

5. Libya, under Gaddafi, did possess chemical weapon stockpiles. The Free Thought Project reports that the U.S. Consulate in Benghazi, Libya was operating as a “rat line” to Syrian “moderate rebels” for Gaddafi’s weaponry while Hillary Clinton was US Secretary of State.

On May 3rd, 2016, the Inquisitr ran an interview with Pulitzer Prize-winning journalist Seymour Hersh, who made the case that Hillary Clinton approved the sending of sarin gas to Syria.

At a time when Clinton is trying to secure the 2016 democratic presidential nomination, Hersh is coming forward with allegations that the democratic presidential front-runner and former Secretary of State Hillary Clinton was a go-between the Obama Administration and the leaders of Middle Eastern nations (namely Saudi Arabia, Qatar, and Turkey) to set up a horrific sarin gas attack and place the blame on the shoulders of Assad. Why? So that the U.S. could invade Syria and blame Assad.

“By the terms of the agreement, funding came from Turkey, as well as Saudi Arabia and Qatar; the CIA, with the support of MI6, was responsible for getting arms from Gaddafi’s arsenals into Syria.”

Hersh didn’t elaborate as to whether the “arms” he referred to encompassed the chemical precursors for creating sarin gas, which Libya stockpiled. However, multiple independent reports have independently confirmed that Gaddafi of Libya did, indeed, possess such stockpiles. Additionally, the The Free Thought Project reports, the much-touted U.S. Consulate in Benghazi, Libya was operating as a “rat line” for Gaddafi’s weaponry while Hillary Clinton was at the helm.

Seymour Hersh was not the only investigative journalist to publicly call out the Hillary Clinton Libya-Syria chemical weapons rat line.

Christopher Lehmann said on October 7, 2013 that top U.S. (and Saudi) officials were responsible for the chemical weapons being used in Syria. Interestingly, Lehmann’s sources were completely different than Hersh’s.

The headline of Lehmann’s article? “Top US and Saudi Officials responsible for Chemical Weapons in Syria.”

“The US Government’s Interpretation of the Technical Intelligence It Gathered Prior to and After the August 21 Attack CANNOT POSSIBLY BE CORRECT.”

During an interview with Aternet.org, Hersh said that during the Hillary Clinton Secretary of State/Obama Administration…

The Benghazi role was to “collect weapons from Libyan stockpiles and send them through Turkey into Syria for a set-up sarin-gas attack, to be blamed on Assad in order to ‘justify’ the US invading Syria, as the US had invaded Libya to eliminate Gaddafi.”

“That ambassador who was killed, he was known as a guy, from what I understand, as somebody, who would not get in the way of the CIA. As I wrote, on the day of the mission hewas meeting with the CIA base chief and the shipping company. He was certainly involved, aware and witting of everything that was going on. And there’s no way somebody in that sensitive of a position is not talking to the boss, by some channel.”

According to Hersh, this was (in fact) a large part of the Hillary Clinton State Department’s operation in Libya. While Hillary Clinton was running the show, her job description reportedly included doing to Syria what had already been done successfully in Libya.

Hersh ultimately wrote a book, The Killing of Osama bin Laden, in which an ex-U.S. intelligence official says that the Hillary Clinton White House rejected 35 targets because they were “insufficiently painful to the Assad regime.” Later, the Hillary Clinton White House put forth a target list that included, among other things civilian infrastructure.

“What would the toll to civilians have been if the White House’s proposed strike had been carried out?”

In response, Hersh said that he U.S. “tradition” had been to ignore civilian casualties, and he presumed that the tradition would continue under Hillary Clinton.

“U.S. attacks are okay or even desired (so as to terrorize the population into surrender) – not an ‘issue’, except, perhaps, for the PR people.”

6. Finally we have the photos of the pick up trucks around the area where White Helmets claims the sarin gas attack occurred.

Were the pick up trucks there to transport people/bodies to the location in order to stage the social media evidence?

Or were the trucks there to transport the chemical weapons and stockpile them in a hidden bunker, carved into rock?

Are the chemical weapons reported in the Idlib gas attack, the weapons that were transported from Hillary’s destroyed Libya, and into the hands of Obama’s Al Qaeda “moderate rebels”?

Meanwhile, pick up trucks have been photographed around bodies of those killed. Again, it must be questioned why there are people around sarin gas without any protective gear, and not affected at all when it can begin attacking the body within seconds? Also, the pick up trucks remain consistent to what local sources have said that many of those dead were kidnapped by Al-Qaeda terrorists from pro-government towns in rural Hama.

Also, what is brought into question is where the location of the hose is coming from in the below picture, a dugout carved into the rock. This also suggests that the location is at a White Helmets base where there are dug out hiding spots carved into the mountainside and where they have easy access to equipment, as highlighted by Twitter user Ian Grant.