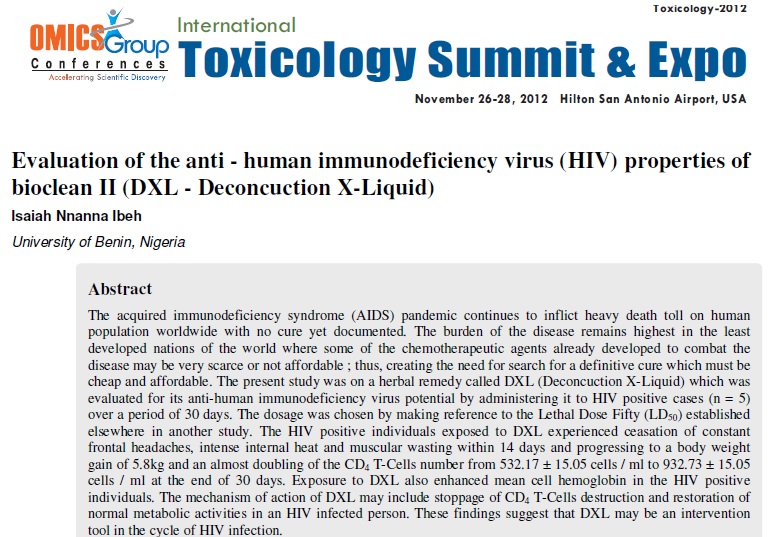 NewsRescue- Researchers led by Dr. Isaiah Ibeh, a Microbiologist from the University of Benin, Nigeria have claimed to have formulated a cure known as DX-Liquid, for the HIV virus believed to precipitate AIDS.

The new therapy for HIV/AIDS unveiled by researchers of the University of Benin passed through due scientific process and was reviewed by international Toxicologists, the lead researcher and Dean of the School of Basic Medical Science, Isaiah Ibeh, has said.

Mr. Ibeh, a professor, said his team “took our finding to the United States” of America and was reviewed by other international Toxicologists.

The work, Evaluation of the anti- human immunodeficiency virus (HIV) properties of bioclean II (DXL – Deconcuction X-Liquid), was reviewed at the International Toxicology Summit and Expo in November 2012, at the United States of America, and published in the Journal of Clinical Toxicology in December, an open access journal.

The exhibition was for cooperation and funding, he said, and the response is positive.

Mr. Ibeh also said the new drug is capable of wiping out the deadly virus, or significantly lowering its load within a month.

Volunteers are currently receiving treatment, and those exposed to Deconcuction X (DX)-Liquid or Bioclean 11, for 30 days have shown complete absence of very minimal level of the virus, the university professor said – PremiumTimes

The HIV virus is a rather unusual virus that defies all logic. It’s association with AIDS has been questioned by various scientists around the world, who claim that the correlation is false, and HIV is merely a fall-virus for an immune deficiency syndrome that may have more behavioral components than admitted.

Update: The government has gone after the professor. He was made to clarify that the remedy has not yet undergone all ratification tests and state also that there has not yet been a formal scientific release of his complete discovery.

NewsRescue recently published an article on this controversial subject:

NewsRescue- In the battle against HIV and AIDS that has defied science for centuries, several scientists whose work has been dismissed by the corporate medical committees, have proposed that AIDS was never caused by the HIV virus blamed for its occurrence, and that HIV virus was simply a commensal of man which has been in existence for millenia. They further defined that the tests for HIV were as is known, tests for body proteins, which indicated genetic or other pathologies or successful immunity reactions and did not confirm presence of active or pathological viral infection.

Today in breaking news, and adding credit to their story, the NIH(National Health Institute) of America confirmed the existence in Asia of non HIV AIDS, which caused AIDS-like symptoms, but did not give the conventional positive HIV protein test.

Is it possible that indeed the entire association of the HIV virus with immune disorders classified as AIDS which has an unusual epic distribution in Africa for no obvious or other known reason, has always been false?

Scientifically it is impossible to prove causation. Correlation is never causation. What this means is that to postulate that for instance HIV causes AIDS, you utilize a ‘theory’, which comes about from a preponderance of ‘suggestive’ evidence. In this case, the finding of high levels of proteins against HIV in patients who report with AIDS symptoms.

From 1981, the year the virus was discovered and on, over 4000 cases of non HIV AIDS were diagnosed in America each year, however health bodies decided to redefine AIDS, imposing the demonstration of titers of protein antibodies attributed to HIV virus into the diagnosis. What this means is, that after this, if physicians discovered any case of non HIV AIDS, they were no longer allowed to classify it as AIDS, they had to abide by new regulations and simply say the patient had multiple or severe infections and low immunity of unknown causes.

European and American doctors added new reports today to earlier descriptions of patients with an AIDS-like disease but no detectable evidence of infection with H.I.V., the virus that causes AIDS. Read more…

As can then be predicted, manufacture of drugs that boosted the immunity, while literally killing the patient with toxic effects, themselves causing AIDS, took front stage and millions of dollars were made by big pharma and western governments.

Several scientists, like famous microbiologist Peter Duesberg, have continually engaged in research and arguments, denying the role of HIV in popular diagnosed AIDS. They continue to present an alter-situation of lifestyle created and caused immune suppression AIDS totally unrelated to the HIV virus, which may occur more frequently in AIDS patients, but is not the cause according to them. Duesberg claims that the tests for antibodies actually prove that the subject has developed immunity to the infection and dealt with the infection, ie, put it under control. He states that all microbes cause infection before the development of antibodies, not the other way around.

It must be noted that the HIV virus defies all known viral behaviors for a virus of its nature. Retroviruses are not known to kill the host they occupy, as this retrovirus has been described to. Retroviruses are not known to ever kill T cells, the cells they infect. Also it is also common knowledge that the prognosis after infection has no predictability. Patients could be infected for a life time and never know they had HIV or never come down with symptoms, and others may test positive for the virus and die shortly after, the ‘slow viral’ nature. These inconsistencies in the prognosis after a positive test have also fostered skepticism about the role of the HIV virus in AIDS.

This is my life…

I have Chronic Fatigue Immune Dysfunction Syndrome (CFS/CFIDS/ME) and NON-HIV AIDS, idiopathic CD lymphocytopenia (ICL). With these two diagnoses, I believe that I am living proof that the AIDS-like CFIDS is transmissible, something that the medical establishment seems unable to admit or to acknowledge. I also believe it makes me living proof that CFIDS and NON-HIV AIDS are basically the same mysterious immune disorder. Read more: http://cfsstraighttalk.blogspot.com/

The videos below define some arguments and controversies about HIV, AIDS and global big business