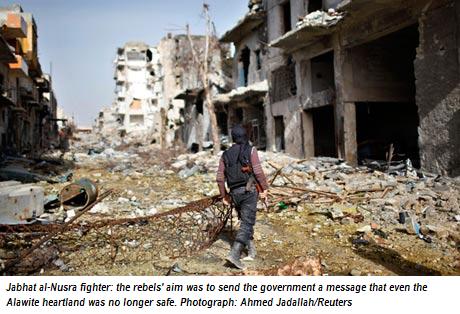 Alawites are fleeing their homes, recounting gruesome tales of executions and other atrocities

For more than two years, as fighting has escalated throughout Syria, a group of villages peopled by government supporters in the mountains above this coastal city has been spared any attacks.

In spite of their proximity to the Turkish border, across which rebel fighters are armed and financed, farmers continued their lives as normal, even though as Alawites allied to the Shia sect to which President Bashar al-Assad belongs they could have been obvious targets.

At dawn on 4 August their peace was shattered. Armed rebels, led by local jihadis as well as members of Jabhat al-Nusra and the al-Qaida linked group, Islamic State of Iraq and the Levant, left their headquarters in the largely Sunni town of Salma. They sneaked into the al-Akrad mountains, taking control of five Alawite villages. The rebels called it Operation Liberation of the Coast and the aim was to send the government a message that even the Alawite heartland was no longer safe.

Rumours of massacres spread as some 25,000 Alawite villagers fled to Latakia. The next day the rebels captured more Alawite villages and reached Aramo, about 12 miles north of Qardaha, the Assads’ home town where Hafez al-Assad, the former president, is buried in a mausoleum. Over the next few days government forces regrouped and gradually recovered the lost ground with help from air strikes as well as local paramilitaries.

On 19 August Syrian state TV reported that all the Alawite villages had been freed. But they did not highlight any massacres and refrained from showing graphic images of mutilation.

“For the first time the government acted discreetly because they feared a sectarian war could break out all along the coast. At the beginning they even denied massacres took place”, Rajaa Nasser, an opposition politician in Damascus told the Guardian. He speculated that the attacks on the Alawites could have been revenge for the slaughter of Sunnis in Banias and Baida in May, two places about 30 miles south of the city of Latakia. Human Rights Watch said 248 Sunni civilians were executed there.

The Syrian army has not allowed foreign reporters into the Alawite villages to check the massacre reports, but in Latakia city the Guardian spoke to three officers who took part in recapturing the villages. Each was interviewed in separate locations. Two were relaxing off-duty in beach-front hotels and villas. They spoke of executions and other atrocities.

“The attacks started with treachery,” said Hassan, an officer in Syria’s special forces. “There was a unit of 40 troops. A Sunni defected from it and took 30 other Sunnis with him. A few days later they were part of the attack that started with the village of Hambushiya. The 10 Alawite troops left behind in the area were killed.” Hassan said he could listen to the rebel’s radio communications. “I heard a rebel telling another rebel: ‘Kill this one, but not that one’ . One rebel asked: ‘What do I do about the girls?’ The answer came: ‘I’m sending a truck to pick them up’. Several were taken and raped, and have not been seen again,” he said.

“They kidnapped Sheikh Badr Ghazal and stripped girls and the sheikh to humiliate him. The sheikh was then killed. Rebels videoed the events and we found the pictures on the mobiles of dead rebels when we retook the villages. They have not been shown on Syrian TV or media because they are too distressing.”

Shadi, a 32-year-old officer in a local defence unit that is separate from the Syrian army, was lightly wounded during the government’s counter-attack. “When we got into the village of Balouta I saw a baby’s head hanging from a tree. There was a woman’s body which had been sliced in half from head to toe and each half was hanging from separate apple trees. It made me feel I wanted to do something wild,” he recalled.

Ali, a member of the regular army, said he also saw the baby’s head. “We found two mass graves with 140 bodies. They were not shot. They had their throats slit. About 105 people of different ages were kidnapped,” he said. “It’s really scary what happened. Nobody has gone home to the villages because so much has been destroyed and many houses have been burnt. The whole area is unusable. Salafists from abroad were behind the attack.”

The officers’ accounts cannot be independently verified but the Guardian has obtained lists, compiled by local activists, with the names of victims from Hambushiya, Balouta, and five other villages. They include 62 people listed as killed, 60 kidnapped and 139 people who are missing. The dead range in age from a toddler of two to a man of 90. The vast majority are women, children and the elderly since most men in the villages were away on duty as part of the volunteer defence forces elsewhere in the region. They did not expect their own villages to come under attack.