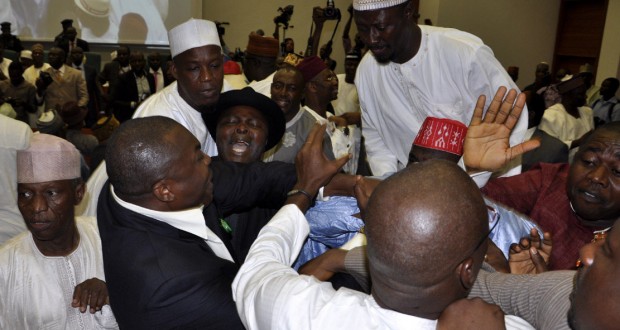 NewsRescue– These are three terminologies that have recently been discombobulated in Nigerian presidential speeches. Therefore I see the necessity to remove the muddling on these terms. You have Corruption, Stealing and Terrorism. To the point, all three of these are one and the same. Corruption= Stealing= Terrorism; and likewise, Terrorism= Stealing= Corruption.

I am on record as having severally expressed that ‘corruption’ is merely a fancy European qualification for historic lowly crime of stealing. Fela Anikulapo Kuti vocalized this clear point, regarding all these fancy terminologies as pretty tags for the same armed robbery offence. His words, ‘authority stealing pass armed robbery.’ He continues, ‘if gun steals eighty thousand Naira, pen steals two billion naira.’ And with corruption, embezzlement, maladministration and all those fancy British tags, you don’t hear them call you out for being a thief and rouge. Well, Sir, we do. We call you a rogue and a petty thief if you are a corrupt-thief.

If you are still confused, let’s define and study these ‘complex’ words with help from the free dictionary online:

Stealing– This is the act of taking someone’s property without obtaining legal permission.

Government corruption– Lacking in integrity, debased, putrid, tainted government officials who steal from the public-people’s coffer and betray the people’s trust. This includes giving or taking illegal payments in exchange for favors or influence. It also includes denying people justice.

All these three terms are infringements and strong violations of trust.

When you are robbed, you are terrorized. You have been intimidated and violated. You have lost you sense of livelihood and your security is undermined. When government officials are corrupt, they have robbed the people of their due allotment. ‘They have stolen our trust.’ As I have previously put it in a cautionary open letter to late president Yar’Adua I wrote at the swearing in of the Yar’Adua-Jonathan administration, these officials have stolen, not from the national cake, but from the pauper’s loaf. They have dipped their hands into the pocket of every last Nigerian at home and abroad and taken from the pennies contained to enrich themselves. This is done without our consent and legal permission, thus making it stealing.

Take for instance when you give out a petroleum PFI for someone to bring in petrol to Nigeria. And then you ask for $500,000 upfront for this ‘gift,’ to a buddy cabal ‘businessman.’ I am sure you agree that this is corruption, but you fail to see how this is robbery and terrorism. Firstly, on the robbery aspect, where did the $500,000 come from?

The ‘businessman’ pays the $500,000 kickback from the Nigeria and Nigerians money which is in your ward as the government official, to repay the money he gave you. In essence, he steals this money from us in cahoots with you. By being corrupt, you are a robber and an accomplice to robbery. Proverbs 29:24 (KJV): Whoso is partner with a thief hateth his own soul: he heareth cursing, and bewrayeth it not.

I have phrased it thus:

Thieves rather steal from the rich…

The political elite rather steal from the poor.

Now while we consider how corruption is robbery, let’s analyze the third term. Terrorism is the act of terrorizing. This involves any action by a person, group or government, by which an affected victim loses his sense of safety, security, and includes losses of wealth, health and life subsequent to deliberate actions of the terrorist.

I am happy we find terrorism as an important threat. I quote:

“Our Administration will not rest until every Nigerian is free from the oppression of terrorism. I reassure you that no cost will be spared, no idea will be ignored, and no resource will be left untapped in the quest to enable our people live without fear.”

So now, let us appreciate what terrorism is, now that we are assured the Nigerian government will fight with all resource to ensure that at last we can live without fear of being terrorized.

In understanding terror, one needs to appreciate the layout of human social existence. Man can either have or not have. Our vocabulary consists of expressions of either opposite position. Love is the lack of hate. Hate is the lack of love. Peace is the absence of war and likewise, war the absence of peace. Ralph Waldo Emerson’s writing on ‘compensation’ would make a great read.

As Mr. President has correctly stated, the result of fighting terrorism is to create an environment where we can live in the absence of fear, because terrorism presents with a state of fear, and safety is a state without fear.

A terrorist steals our sense of freedom and safety. He is a thief. We are used to referring to murder as the murderer ‘stealing’ our loved ones from us, or the devil doing so in some cultures.

Terrorism is not directly limited to instant murder. There are varieties of terrorism and the terrorism deaths can be slow, torturous, disgraceful and painful. Ultimately terrorism leads to a state of increased loss of life and life’s worth.

MEND engaged in economic terrorism. When the direct deaths by MEND are counted, we get a lower number than Boko Haram for instance, but when the economic terrorism aspect of MEND is considered, which precipitated in a decrease in Nigeria’s oil output by over half, we realize that the result of the economic terror of the worst years of MEND’s carnage are still being felt today in deaths. Many died due to health care, roads and other services that Nigeria could not provide due to economic terrorism. Many are still dying today as a result of MEND’s terrorism. The spilling of oil by MEND operations including proliferation of oil vandals then and now, leads to a continued state of poisoning and death of people in the Niger Delta. I hope this picture helps you understand how economic terrorism may even be worse than direct murderous terror with localized and limited deaths.

John 10:10 The thief comes only to steal and kill and destroy.

Nigeria’s populace live breathing toxic fumes from generators every day. They are being terrorized by the noise pollution in addition to the chemical pollution. This is chemical ‘warfare’ poisoning as a direct result of government failure-terrorism. The noise and fumes shorten our lives and give many early deaths. At the root of this is government robbery.

When you divide up our country and sell it to the cabal. This is robbery and terrorism. When governments free convicted criminal cabal and then even fly these in government jets to further terrorize the people. This is grave terrorism. By pocketing a kickback (our money) to have and approve of a substandard road built, you have stolen from us and you continuously terrorize the people (commuters). In some cultures, your hands would all be cut off by now.

The terrorists that operate in Nigeria, from Boko Haram to MEND, to oil vandals, to Kidnappers. All these direct murderers and thieves of people’s right to safety, security and the pursuit of happiness, only abound and operate freely, unabated under authority terrorism.

So, you are the kingpin of all these criminals. You, as a failing government are the chief terrorist, the chief kidnapper, the chief bomber, and the chief quack doctor, dangerous engineer, etc. This is what government stands for. The role of government is to provide a safe and conducive environment for its people to thrive and perhaps even excel. I put it this way:

The Cabal kidnap our nation.

When government officials keep the nation in a terrorized state; rob the nation its right of good schools, good roads and safety from maniacal behavior, while they –the officials—live in protected homes, and send their children to schools abroad and themselves go overseas at every slight cough or cold; going overseas to territories presided upon by men like them, good mayors and governors who provide for their people as is due, we call such government officials, robbers, vandals and terrorists.

We Nigerians hope you will fulfill your promise to abate this government terrorism, leaving no official with impunity from the very, very top to the bottom.