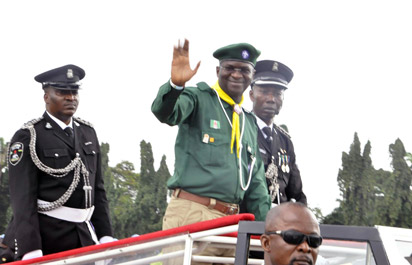 Governor Babatunde Fashola of Lagos State, said Nigeria came into being on October 1, 1960, and not in 1914, advising the Federal Government not to distort history by its planned centenary celebration next year.

The governor while addressing the gathering said “For me, Nigeria was born as an independent sovereign nation on October 1st, 1960. Perhaps she was conceived in 1914 but as we race towards this, it is important not to distort history.”

He said the reason was that “a generation is coming behind us they need to be sure about the history of their fatherland. I will seek better understanding and explanation by those who are behind the centenary celebration.
“This is because if we roll out the drums three years ago to celebrate the 50 years of Nigeria’s nationhood, the independent that we fought for and our nationalist went to jail for.

“Many of our prominent leaders lost many things. Some lost their lives, some lost their dignity. Some lost their freedom. The scars of those years of colonial dominion are firmly etched and preserved in the freedom Park on Broad Street in Lagos. It was built with bricks imported from England with money earned in Lagos in order to keep our nationalists in confinement.”

“Let us be very clear October 1, 1960 was the day of nationhood for Nigeria. My teachers and parents thought me that history. I used to come out as a child to participate in the Independence Day parade exactly as the children that here today.

“Then what is this centenary suddenly about because I don’t remember as a child ever coming on amalgamation day to celebrate the day. And suddenly how did we get to 100 when we did not celebrate the 50th, 60th and 99th anniversary.”

“There is something wrong here. I don’t know why the celebration but I will like clarification. Maybe conception of Nigeria took place in 1914. But it is the date of birth of the child that one celebrates and I think that birthday is October 1st, 1960.”

The governor however called for tolerance and peaceful co-existence, saying “I am lending my voice to the appeal for peace across our land.
“Only a peaceful solution must be found to arrest the present worsening stalemate and restore normalcy into the country.
“I believe that we are too blessed to resolve our differences with threats of violence. For me, compromise is critical and we must all reach for it in order to make more meaning out of our situation.”

Oladipo Okunlola commented in response to a challenge at Gov. Fashola:

But, ma if you can remember in my elementary days in high school in Nigeria, part of Cameroun was Nigeria until 1947 we had the referendum under sir Macpherson rule also, if you can remember very vividly we once had a political party called NCNC (National Council of Nigeria and Cameroon. Nigeria (Niger Area) was so referred to by Mrs Luggard at the advent of colonisation in 1914 but part of present day Cameroun was still in the Niger area until 1947 the part borders with Akwa Ibom. Celebration 1914 artificial amalgamation of the Northern and southern protectorates is tantamount to celebration slavery and colonisation. Nigeria became what it is today at his birth in 1960 period