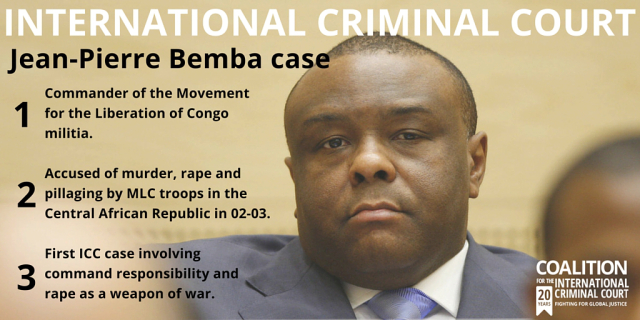 A high-ranking Congolese politician was convicted unanimously Monday of war crimes and crimes against humanity in a landmark case at the Hague that put sexual violence in the spotlight.

The charges against Jean-Pierre Bemba — a former rebel leader and vice president in the Democratic Republic of Congo — related to rapes, murders and pillaging allegedly carried out by his fighters.

Bemba was the highest-ranking official yet to be convicted by the court and showed no emotion as the unanimous verdict against him was read out Monday at the Hague.

His marathon trial — which began in November 2010 — was the ICC’s first to focus on crimes committed in Central African Republic (CAR) and the first to recognize rape as as war crime.

Bemba faced three war-crimes charges and two counts of crimes against humanity — for allegedly commanding the MLC militia which raped, murdered and pillaged between 2002 and 2003 in neighboring CAR’s civil war.

The trial focused on the question of “command responsibility” — i.e. whether Bemba should be held legally liable for alleged crimes committed by fighters under his control. It also was the first case to focus so heavily on rape as a war crime, according to the Open Society Foundations. Read full on NBCNews