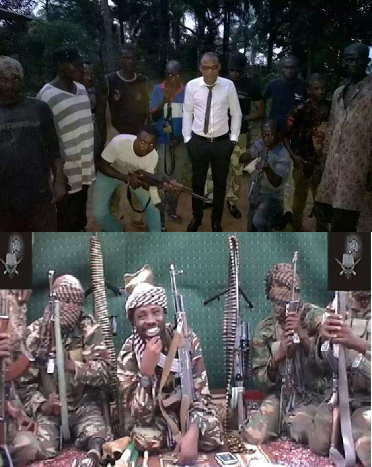 In March of this year the Imo state police declared Nnamdi Kanu wanted. According to newspaper reports, he had been caught buying AK47s from gun-running ‘pastors.’ The two men, one Pastor Nmenabu, 67 and High Priest Festus Igwe, 63, arrested had supplied Nnamdi Kanu a first bath of guns and received a first installment of N300,000. They had brought a second supply of mean guns when the police arrested them and declared the seditious Radio Biafra boss wanted.

I can fill 100 sheets of paper with the terror and treasonous atrocities of Nwannekaenyi Kenny Okwu-Kanu, aka, Nnamdi Kanu. But what is the use; we are all too familiar with the actions and rants of this madly evil miscreant.

Worse yet, Kanu has exploited the legitimate frustrations of Nigerian youth and after milking them of millions of dollars, via the sale of fake ‘Passport’ travel documents while claiming Biafra was recognized by 60 nations and taxing them at the threat of expulsion from ‘Biafra’ if they do not pay up. He exploited them the most after his Goodluck Jonathan lost by engaged them in deadly and embarrassing battles to further his megalomaniacal ambitions and protect his PDP premiers. The vampire has prayed for them to die in the struggle. He operated as a death cult where he trained his followers that they should sacrifice their lives if they do not get Biafra. “Biafra or death.” The blood of the many who have died worthless deaths in protest are on his neck.

Are our judges insane or were they bribed by Jonathanians? Do they understand what terror means? Do they know the implication of releasing a sworn terrorist who has committed to burn Nigeria down and has actually purchased weapons to this effect and sponsored terror across the length and breath of Nigeria?

Do these money-bribed judges understand the way they put Nigerians at risk and directly in harm’s way with their stupid and careless actions? How much were they bribed to recklessly force for the release of an overwhelmingly guilty terrorist? Nigeria did not drop charges on him or not have charges; they only let go of smaller charges for his bigger crimes of terror. What part of this do our heartless and clueless judges not understand? Do they think it is a joke?

In any event, what right has a judge who has no clue what national security means and probably cannot even spell the word, to determine who is let loose and who is kept safe away from the humans he calls animals in prelude to kill them?

All over the world anti-terror laws give the state power to detain national security risks without trial for as long as they deem necessary. And laws are made worldwide by the victory of a particular case, courtesy of a Judge who has brains or gumption. This is the way of the developed world. Are we truly animals as Kanu calls us that we release a person who has actively invested in sponsoring terror and encouraging deadly attacks against us?

I cannot live in a country where terrorists are released to walk free. Twice they say Jerry Gana bailed out Mohammed Yusuf and he was let walk free. The rest is history. 100,000 dead and 3 million displaced in the worst global human tragedy of our times.

If you free Kanu, you must free a piece of land he can call his Biafra and live there with his miscreant disciples. You MUST not leave us with these terrorists to walk free among us and buy more guns and bombs to kill us. I refuse to live in such manner. Animals and human beings cannot co-habit. I don’t know anymore which is which, considering how animalistic our judges are, but whichever way, we must be separated and Kanu can take the judges with him.