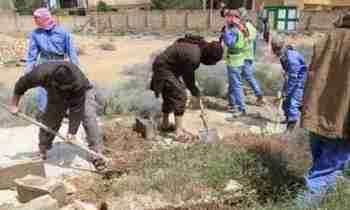 The overall number of militants who have been executed remains uncertain. ABNA reports that 35 fighters were killed, while Iraqi News is reporting that Islamic State (IS, formerly ISIS/ISIL) buried 45 of its members alive on charges of fleeing the battlefield.

According to ABNA, the Takfiri ISIS terrorist group has reportedly killed nearly three dozen of its own members in Iraq’s conflict-ridden northern province of Nineveh on charges of fleeing the battlefield.

A provincial source, speaking on condition of anonymity said on Tuesday that the terrorists buried 35 fellow extremists alive on the outskirts of Qayyarah.

The town is located about 35 miles (60 kilometers) south of the militant-held city of Mosul.

The source said the slain militants were accused of fleeing clashes with pro-government Iraqi forces in the village of Bashir, situated some 20 kilometers (12 miles) south of the oil-rich city of Kirkuk.

Fighters from Popular Mobilization units recaptured Bashir from Daesh terrorists on May 1.

Daesh killed 35 of its fellow terrorists by firing squad at the Ghazlani military camp south of Mosul on February 28 after accusing them of conspiracy against the Takfiri outfit. A day earlier, the extremists had shot and killed a dozen members of the terrorist group in the village of al-Hadar south of Mosul.

The slain militants had reportedly been accused of escaping clashes with Iraqi government forces in Iraq’s embattled western province of Anbar.

Gruesome violence has plagued the northern and western parts of Iraq ever since Daesh Takfiris launched an offensive in the country in June 2014, and took control of portions of Iraqi territory.

The militants have been committing vicious crimes against all ethnic and religious communities in Iraq, including Shias, Sunnis, Kurds, Christians and others.

Iraqi army soldiers and fighters from allied Popular Mobilization units are seeking to win back militant-held regions in joint operations.