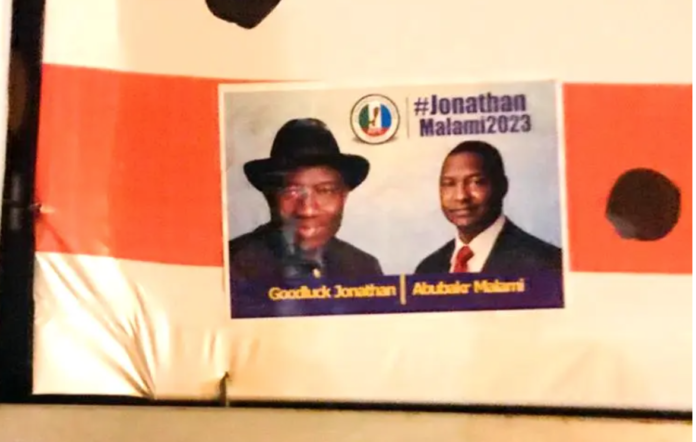 A group, Arewa 2023 Agenda for Peaceful Transition, has said that Nigerians may not have the last of the crisis in the ruling All Progressives Congress(APC) as the plot to make former President Jonathan the party’s candidate in 2023 with Malami as running-mate, thickens.

National Chairman of the group, Usaini Ibrahim Kano, said in a statement on Sunday, that already, many strategic locations in the country have been flooded with the Jonathan-Malami posters, suggesting the agenda is well underway.

According to the group, “this development is coming on the heels of National Convention and Congresses at the States level that was first postponed twice. And there was disquiet over the cost of nomination forms for the various elective offices of the party as preparations for the 2023 general election begin in Ernest.”

“Observers insist that the internal bickering over the increase in the number of polling units across Nigeria by INEC is a child’s play, compared to the pending legal cases of the party, various committees of reconciliation whose reports are still hanging in the balance and the new funding challenges of the party.”

They said before now, there has been a prolonged internal battle between all forces, including the key players in the merger that eventually gave birth to the APC in 2019.

“While the lingering crisis that has led to a fierce legal fight in Zamfara is assuming frightening dimensions on the fate of the party in the State, Tinubu’s camp is struggling to maintain a grip on the national Headquarters. His camp believes that it is necessary to take over the party machinery, in order to be able to fulfil his 2023 presidential ambition.”

” It is also unclear at the moment, where Tinubu’s man – VP Osinbajo presently stands on the ambition of his benefactor. Speculations are also rife that VP Osinbajo has been advised, at this point ” to stop being anyone’s political errand boy” and assert his political independence ahead of the 2023 race.”

“However, Minister Rotimi Amaechi is said to have already made it known to stakeholders that as one of the founding fathers of the party, not just any candidate should be foisted on the party as its presidential flagbearer or as running mate for 2023, without the consent of the key players of the party.”

” Rotimi Amaechi was said to have openly questioned the latest plan to return Jonathan to the party. Ameachi does not see the wisdom in returning the same Jonathan that the APC threw out of power.”
“Meanwhile, the battle to emerge Vice President ahead of 2019 has thrown up some of the most influential members of the ruling party who have their eyes focused on the VP seat.”

“For Governor Fayemi, who has been working underground for almost a year to find the easiest means of grabbing the seat of a presidential running-mate, nothing short of that position would be acceptable to him,” they said.