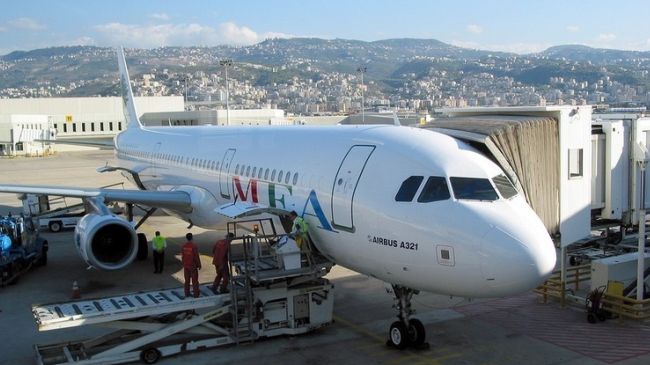 PressTv- Lebanon’s security officials say a suspicious cargo containing huge amounts of US dollars, guns, special passports and credit cards have been seized upon arrival in the Lebanese capital, Beirut, from the US and Brazil. The image above shows the plane being unloaded at Rafiq Hariri International Airport

The items, packed in a number of chests and delivered via airmail, were discovered at Beirut’s airport, the Lebanese security officials said.

The chests also contained a list of both well-known and ordinary Lebanese citizens including a figure related to Salafi extremist groups. The security officials have summoned a number of the individuals, whose names were on the list, arresting some of them.

Beirut has redoubled security surveillance across the country following remarks by some Lebanese factions as well as widespread rumors about the presence of al-Qaeda in Lebanon.

Meanwhile, the Lebanese defense minister earlier confirmed that members of the al-Qaeda terrorist group, fighting against the government of Syrian President Bashar al-Assad, have entered Syria through Lebanon.

Over the past few months, reports have circulated that caches of weapons have been smuggled to armed gangs in Syria through the Lebanese border.

Less than two months ago, Lebanon was busy defending itself after Al-Qaeda terrorist launched two suicide bombs inside Syria’s capital that killed over 40 people and injured another 150.

(Reuters) – Prime Minister Najib Mikati said there was no evidence that al Qaeda militants were operating in Lebanon, countering the defense minister’s statement that the global network had sent operatives into the Lebanon-Syria border area.

Grappling with a nine-month anti-government revolt, Syria has blamed al Qaeda for a double car bomb attack on its capital last Friday that killed 44 people and wounded more than 100.

Lebanon has tried to distance itself from the events in Syria where the uprising started off in March as a wave of peaceful protests against President Bashar al-Assad but is now overshadowed by an armed insurrection.

“There is no firm evidence of an al Qaeda presence in (border area) Ersal,” Mikati told journalists late on Wednesday, according to Lebanon’s state National News Agency.

Assad says he is combating Islamist terrorism steered from abroad – a sensitive issue for neighboring Lebanon.

The interior minister later spoke out against the statement, denying there was an al Qaeda presence in Lebanon.

Following those attacks Lebanon has stepped up intel operation. By the end of December there was firm intelligence in place linking the arms being smuggled into Syria to al-Qaeda.

The Lebanese prime minister has denied the allegations.

Ali linked the issue of suspected arms smuggling to claims that Al-Qaeda was operating along the Lebanese-Syrian border, made earlier this month by Lebanon’s pro-Syrian Defense Minister Fayez Ghosn and called on Beirut to take “serious, strict measures to end arms smuggling from Lebanon into Syria and… not give in to international pressure.”

“Defense Minister Fayez Ghosn’s exposure of Al-Qaeda members who are infiltrating Syria via the Lebanese border village of Aarsal is an issue that must be dealt responsibly and seriously,” Ali was quoted as saying by Hezbollah-run Al-Intiqad website.

The Syrian ambassador said that “arms smuggling and terrorism are complementary, and measures to put an end to this matter must be clear and decisive,” the AFP has reported.

“no conclusive proof” that Al-Qaeda is operating along the Lebanese-Syrian border.

“There is no conclusive evidence of the presence of Al-Qaeda in Aarsal,” Mikati told reporters late on Wednesday.

The Lebanese defense minister said last week that Al-Qaeda insurgents were operating on the border disguised as Syrian opposition activists, Reuters has reported.

Lebanon has tried to distance itself from the events in Syria where the uprising started off in March as a wave of peaceful protests against President Bashar al-Assad but is now overshadowed by an armed insurrection, Reuters points out.

Shiite militant group Hezbollah heads an alliance that dominates the Mikati government and is a staunch ally of the Assad regime, which blames the violence within its borders on “armed terrorist” groups.

In the investigation following Al-Qaeda’s December twin suicide bombings in Syria it was learned that Salafi and 20 other Lebanon organizations had been deeply infiltrated by Al-Qaeda and operating in Lebanon.

Defense Minister Fayez Ghosn said last month that Al-Qaeda militants were sneaking into Lebanon under the guise of Syrian dissidents.

Ghosn’s statement has thrown Mikati’s government, already torn apart by sharp differences over many key issues, into disarray after both the prime minister and Interior Minister Charbel Nahhas rejected the claims of the presence of Al-Qaeda militants in Lebanon.

Qanso said Salafi movements in north Lebanon and several areas in the eastern Bekaa Valley have provided “fertile ground” for the spread of Al-Qaeda in Lebanon.

He said the Salafis also helped Al-Qaeda members infiltrate into Homs, Al-Qusair and Tal Kalakh in Syria “to fight in order to weaken Syria in an attempt to topple it.”

The Baath Party lawmaker, a close ally of Damascus in Lebanon, said Al-Qaeda began to build its strength in Lebanon under the name of Fatah al-Islam from the time of the incidents at the northern Nahr al-Bared Palestinian refugee camp in 2007. It then moved under the name of Jund al-Sham and Kataeb Abdullah Qassam in the Ain al-Hilweh Palestinian refugee camp in south Lebanon, he added.

Qanso said “some” residents in the border Bekaa town of Arsal had set up a small town in the Christian area known as Mashareeh.

A mosque and a mobile clinic set up by Arsal residents were designed to provide Al-Qaeda easy access to Syria, he added.

Qanso also accused Future Movement MP Khaled Daher, a fervent critic of Damascus over its crackdown on reform-seeking protesters, of being involved in the unrest in Syria, “given that one of his bodyguards was killed in Homs a few days ago.”

He expressed concerns that once the “Syrian revolution” is over, Al-Qadea militants would flourish in Lebanon.

“If Syria falls, the last resistance bastion will turn into a state similar to that of Egypt or Libya and will become a breeding ground for Salafis and [Muslim Brotherhood],” Qanso said.

“In that case Hezbollah would be affected and Hamas and the Palestinian cause would be dissolved.”

Meanwhile, a high-ranking security source insisted Al-Qaeda was not operating in Lebanon.

“There is no Al-Qaeda presence in Lebanon at all,” the source told Ash-Sharq Al-Awsat.

“Lebanon is no longer an open arena and its security is no longer slack,” he said, adding that Lebanese territory is also “no longer a base or corridor for any terrorist group.”

“It is true that we share some beliefs and doctrines with Al-Qaeda … but we disagree with [Al-Qaeda] in applying the political Jihadist policy in the Arab countries,” Diqmaq told Ash-Sharq Al-Awsat.