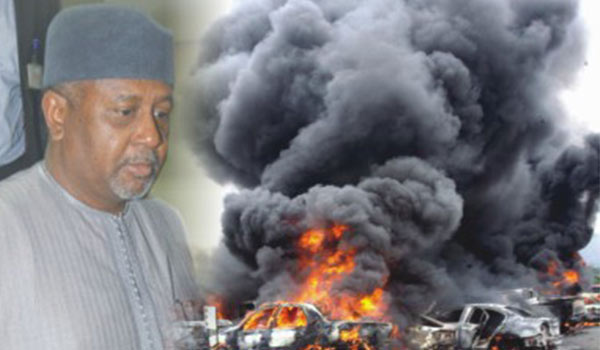 I woke up on Tuesday morning, February 10 to meet comments to news and articles I posted a day before on my blog, abusidiqu.com. Since every single comments so as to be able to weed out those no considered fit for consumption, I had to go through each of the comments to know which to approve and which to disapprove. It was during this process that I discovered a comment with the following words:

“Keep on fooling yourself and others with your fake stories. We will soon get you down. Kindly note that your base is somewhere in Lokoja, Kogi State and we have our men around watching you. Very soon, we will get you down.” [Screen shot below]”

The comment was in response to a news report a published a day earlier exposing the six weeks election marshal plan [See: EXPOSED: Jonathan’s Six Week Marshall Plan for Which Election was Postponed Leaks]

I ordinarily would have passed the comment as just another rant from some online bully, but the part about Lokoja, Kogi State caught my attention, so I decided I was going to inform my followers on twitter just by way of information and I did, but without attaching the screen shot of the comment. As expected, some persons prayed for my safety and encouraged me not to be cowed by their threats, while some others dismissed it as just one of those attention seeking claims. Well¸ I didn’t bother about the latter because my decision to make the threat known is never to make any capital of any kind from it, but to inform my followers of the development just in case.

I thought the threat of that day would be it all, until I woke up the following day to yet another threat comment, this time around from a different email address, similar IP address, but with similar threat message. [Screen shot below]. I approved the comment just like I did to the previous one so It would be on record and then sent out a message to my twitter followers for the second time that I have been threatened again. This time around, I attached the screen shots of the two threat messages. Few hours after, I got another threat comment. This particular one got made reference to my health and warned again that they will get me down. [Screenshot below]

The two threats notwithstanding, I remained unconvinced that they are real until the following day, Thursday 12 February when I received two strange telephone calls from numbers that was concealed. The first call came in at exactly 12:09pm with ‘private number’ appearing on my screen. When I answered the call which lasted for exactly 12 seconds, the caller told me “you think you can write rubbish about this govt and go free? We will get you down”. The call came to an end immediately after. Until the second call came in at 2:02pm with the number appearing as “unknown”. I however declined to answer this particular one knowing it could be from the same person who made the first call. There have been no further threat since the 2:02pm call of Thursday, 12th February, but I cannot conclude that would be all.

By way of precaution, I have taken all the necessary steps that I need to take as far as issues like this is concerned and this includes trying to find out who may be responsible for the threats. Before that however, Investigative online platform, NewsRescue carried out some investigation on the second day of the threat and came up with some findings which indicate that the threats (comments) were made from a blackberry device pointing to the United Kingdom. They however added that the United Kingdom address may be a decoy to erase any trace of who the perpetrators are. [See screenshot of their findings below]

You can read their full report: AbuSidiqu Media Receiving Death Threats From ‘Army’ For Posts On Jonathan 7th Feb. Coup

I have decided to make this known to the public just so they will be aware and also to emphasizes that no amount of threat will cow me into submitting to the wish of those who have chosen the path of threat rather than confront the issues I raised in the report exposing the plan by the Jonathan government for which they pushed for the postponement of the election. That report or any other one for that matter are based on credible intelligence for which I am ready to stand by any time or day. Therefore, no amount of threat, intimidation or whatever it is called will stop me from doing doing what I have considered my responsibility to the Nigerian public.

I shall continue in whatever way I can to help strengthen Nigeria’s democracy, the well-being and the rights of the people as well as advocate for good governance, transparency and human rights, in line with the values expected of a modern democracy.