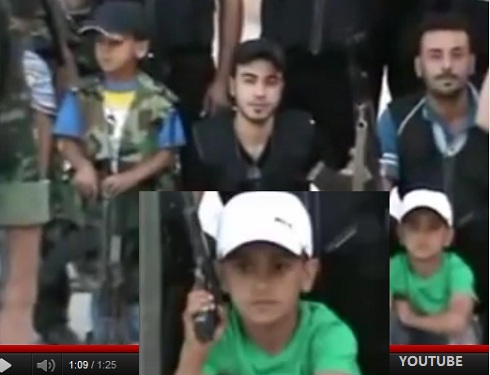 NewsRescue- A most dangerous media joke is playing out right before the eyes of millions of global audiences.

In the most unbelievable spin of clear events, the global corporate media is twisting a straightforward case of kidnap and terrorist threats to the entire world into a case of heroic display by the same terrorists.

Everyone recognizes that the kidnap of 21 Filipino UN peace workers was the next greatest western foreign policy embarrassment, after the assassination of US ambassador to Libya, Stevens, following a western designed overthrow of the Gaddafi regional stabilizing government and its replacement with a government of the  LIFG (terrorist brigades) and a Benghazi al Qaeda terrorist regime.

Syrian terrorists of the “Syrian National Coalition,” who have been growing frustrated with the lack of desired support including their request for a Libya-style no-fly-zone(military bombardment) over Syria, and who recently rejected attending a Syria summit in show of their discontent, yesterday kidnapped 21 UN peacekeepers from the Philippines.

Their action was clear and unambiguous. The video below released by the terrorists, has the kidnapped workers stating who they are.

On a video posted on their website, and according to an article published on CNN, Thursday, the kidnappers made deliberate demands and threats to the entire world, and the UN response was just as clear:

There are two videos rebels posted on YouTube that present the rebels’ point of view.

In one, a rebel insists that the peacekeepers will be held until al-Assad’s forces withdraw from the village of al-Jamlah, where there has been heavy fighting.

“We demand from America, U.N. and the Security Council to intervene and get al-Assad forces to withdraw, then we will release these detainees,” the rebels say.

The other video shows rebels walking near several U.N. trucks.

“This U.N. force entered Jamlah village to assist the regime … and (the U.N. is) claiming that they are here just to stop the clashing,” a rebel says.

Members of the U.N. Security Council condemned the detainment and demanded the peacekeepers be released.

The 21 peacekeepers are Filipino, the Philippine government said Thursday.

“The apprehension and illegal detention of the Filipino peacekeepers are gross violations of international law,” Foreign Affairs Secretary Albert del Rosario said in a statement.

The peacekeepers are reportedly unharmed, and negotiations are underway to secure their safe release, the Philippine government said. The Department of Foreign Affairs said said it is coordinating efforts with the United Nations’ peacekeeping agency.

The rebels posted on Facebook a letter to U.N. Secretary-General Ban Ki-moon and the leaders of the Organization of Islamic Cooperation and the League of Arab States.

“What is happening (is a) genocide for the Syrian people with the world watching and listening (and) will lead to the gravest consequences,” they wrote.

“The blood of the people of Syria will be a curse on the whole world if there” is “no effective action,” it said.

The letter pointed out that the city of Homs is under constant bombardment.

There has been “hardly a Syrian village spared from the regime bombing” the letter said.

“This might be the last message to you,” it warns. “I call on you all to bear your international responsibilities before God and the people.”

The letter is signed by Ahmed Moaz al-Khatib, the president of the Syrian National Coalition, an umbrella body of anti-Assad rebels.

But right now, unraveling before our eyes, is a dangerous and scary twist in event presentation by the media, as obvious urgent negotiations and possibly, some sort of batter has occurred and the terrorists have promised to free the hostages.

Firstly, media like CNN, do not even have this story on their home page. The kidnap of Filipino UN peacekeepers by terrorists in Syria is obviously not a headline. In addition, it has been noticed that unlike the recent case of kidnap of foreign workers in Algeria in the Mali conflict, for instance, the word “Kidnap,” has been sparingly used by the corporate media in reporting this kidnap event.

And this is not the worst part of the story. These terrorists who can decide to kidnap UN peacekeepers, and go ahead to threaten the entire world, do not rightly have drone-scud missiles branded with their names and faces as we would prefer Obama’s drones be used, rather they are being touted as heroes.

Right before our eyes, the global corporate media is promoting a new version of the story that describes the terrorists as having rescued the peacekeepers and not kidnapped them.

On CNN with Christiane Amanpour, a Syria rebel leader had actually told her that he could secure the release of the UN peacekeepers if the west agreed to air-lift wounded Syria opposition fighters to receive medical treatment.

With the many affirmations of a hostage situation, the media as can be read in this Washington Post article is ever ready to do damage control for the foreign backed Syrian rebel-terrorists, by eagerly publishing articles where these terrorists are rephrased as heroes, and who knows, in the near future, can possibly receive UN and Nobel peace prizes.

“With God’s help we managed to secure a group of U.N. members working in the border town of Jamlah after they were victims of the criminal shelling of Assad’s gangs,” the statement said. “We request from the United Nations to send us a security convoy so that we can deliver them to the organization.”

“We have nothing to do with any of the old statements before this one,” added the posting on the brigade’s Facebook page.

A spokesman for the United Nations said Thursday that officials had “been in touch with the peacekeepers by telephone and confirmed that they have not been harmed.

Reactions on CNN’s earlier kidnap article were highly telling. A response of interest that attracted over a hundred likes is quoted below:

Aren’t you embarrassed yet CNN by your completely WRONG reporting of the Syrian conflict? Have you actually been bought by al Jazeera or al Arabiya? I had a hard time just finding this story on your site. Of course, you had to make room for the teen beauty queen story. This is preposterous but then again you’ve been fueling this non-revolution since the get-go. You want to see Assad brought down? He’s the one guy who can stop this madness. At this point, I would say that you personally as a network have blood on YOUR hands. Repeat after me, the UN peacekeepers were KIDNAPPED by TERRORISTS. See? That’s not so hard now is it?????

It is obvious that some very serious and high level damage control is going on. But the scary part is, at what cost? This is how terrorists are encouraged and rather than being hunted, are made heroes, to continue to become the Osama’s of future generations.

At what point will the powers that be, re-access their position in the Syria crises and proceed on a sensible course that preserves life, peace and global sanctity?