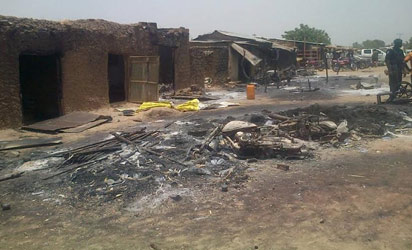 The military yesterday alleged that the herdsmen that have been killing innocent people in some states in the north are targeting Abuja, the seat of the government, and cautions the populace against identifying with them.

The herdsmen, who have been operating under the cover of the night, according to the military, were hired by some unscrupulous faceless people to unleash terror on the populace.

The terrorists have killed about 2, 000 innocent people in the last few weeks.

The military has been dispatching troops to Benue, Nasarawa and Plateau states at the directive of President Goodluck Jonathan.

Some top officers that were sent to Benue on fact-finding mission were said to have written a damning report that showed that the herdsmen were coming into the country from the neighbouring countries to attack, kill and destroy.

The report, according to a top officer of the Defence Headquarters, also revealed that the herdsmen are planning to launch some sporadic attacks on the federal capital. Speaking with LEADERSHIP, a senior military officer quoted excerpts from the report but promised that the military is up to the task of stopping them from entering Abuja.

He said: “It is a pity some people who do not understand the agenda of these criminals pretending to be Fulani herdsmen are identifying with them and attacking the military for dealing with them. These hoodlums, we believe, were hired by some faceless people in the country from the neighbouring countries. They have attacked Adamawa, Taraba, Benue, Nasarawa states, and you would know that Nasarawa is the closest state to Abuja.

“Already they have some camps in Kogi, Niger, and Kaduna states. Some of them are said to be living inside one big forest in Niger (State). All these states surround the Federal Capital Territory. Their mission in those states is to displace the indigenes, take over their land and pretend to be taking care of their cattle. They have already done that in Benue State where two local government councils were sacked; most of the towns and villages there were razed down; many were killed and these forced those who survived their attacks to relocate.

“These herdsmen were coming from the neighbouring Nasarawa State. We saw some of them with their cattle grazing in the two local governments where their people have run away and they pretend as if nothing unusual has happened. In one of the villages they razed down, they used marker to write ‘Nasarawa State’ as if they were doing annexation. Once they settled down in all these states, their next move is Abuja, but this we would not allow, no matter the propaganda being used against the military.”