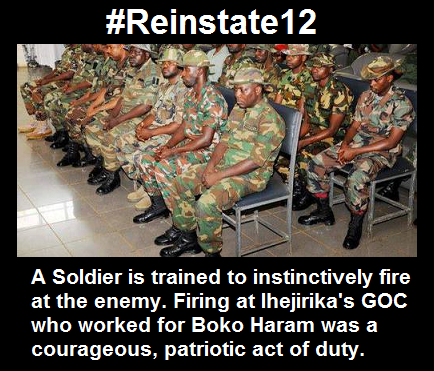 A human rights lawyer, Femi Falana, has petitioned the Chief of Army Staff alleging that the judgment by a General Court-Martial of the army which convicted 12 soldiers for mutiny was characterized by “grave errors of law.”

In the petition dated December 5, Mr. Falana urged the army authority to set aside the conviction and death sentence passed on the convicts by the Court Martial.

The soldiers, initially 18 in number, were arraigned on a six-count charge bordering on inciting mutiny against the GOC, 7 Division, Maimalari Barracks in Maiduguri, Major-General Ahmed Mohammed,  on May 14.

While five of the accused were discharged and acquitted, one was sentenced to 28 days imprisonment with hard labour for being absent without official leave.

“We wish to draw the attention of military authorities in Nigeria to the case of Oladele v. Nigerian Army (supra) where the Court of Appeal emphasized the point that members of the armed forces, like other citizens, are entitled to all the fundamental rights guaranteed by the
Constitution including the fundamental rights of freedom of expression and freedom of assembly,” said Mr. Falana, a Senior Advocate of Nigeria.

Mr. Falana, who filed the petition on behalf of the convicts, noted that the Section 149 (1) of the Armed Forces Act (Cap A20) 2004, stipulates that “an accused may, within three months after being sentenced by a court-martial and before the sentence is confirmed, submit to the confirming authority any written matter which may
reasonably tend to affect the confirming authority’s decision whether to disapprove a finding of guilt or to approve the sentence.”

“By this petition, we appeal to the Chief of Army Staff as the Confirming Authority to disapprove the finding of guilt and death sentence passed on the 12 convicted soldiers  on the ground that the judgment of the General Court-Martial cannot be justified  as it is characterized by grave errors of law which  occasioned miscarriage of
justice,” Mr. Falana said.

The Nigerian Senate in September said it would not plead with the army authority to spare the convicted soldiers’ lives.

George Sekibo, Chairman, Senate Committee on Defence, said the Upper House would not intervene in the matter because the conviction was in the best interest of the military.

On May 14th, soldiers at the Maimalari Cantonment staged a  protest over the brutal killing of 10 of their colleagues by Boko Haram troops. The complaints of the soldiers centred on lack of adequate weapons, poor feeding and non-payment of accrued salaries and allowances.

The protest coincided with the visit of Mr. Mohammed to the Cantonment, and although his car was shot at, he was not injured.

The military authorities had arrested 18 soldiers, including the convicts, and charged them with the offences of conspiracy, attempted murder, mutiny, disobedience to particular order, insubordinate behaviour and false accusation contrary to provisions of the Armed Forces Act and the Penal Code Act.

“It is pertinent to note that the Authorities investigated the immediate and remote causes of the soldiers’ protest and confirmed that the complaints of the soldiers were not unfounded,” said Mr. Falana.

“Upon indicting Major-General Ahmed Mohammed for not attending to the grievances of the aggrieved soldiers, he was removed as GOC and retired from the Nigerian Army by the military high command.

“With respect to the soldiers’ complaints of lack of adequate equipment to fight the Boko Haram troops who are armed with sophisticated weapons, the National Assembly has recently approved the request of the President & Commander-in-Chief of the armed forces, Dr. Goodluck Jonathan for $1 billion loan to purchase military hardware
for the purpose of prosecuting the war on terror.”

Mr. Falana argued that the soldiers’ protest at the Cantonment was not connected with ‘operations against the enemy,’ as stated in the Armed Forces Act, adding that the soldiers were protesting against the negligence of the Federal Government and the military Authorities to
motivate and equip them.

Mr. Falana further stated that the Prosecution, during the
court-martial proceedings, did not prove that the acts of the convicts “were deliberately designed to put the Nigerian Army in imminent danger.”

“Since the Prosecution failed woefully to prove the essential elements of the offence the General Court-Martial erred in law in convicting the 12 soldiers for mutiny and sentencing them to death,” Mr. Falana
said.

“In the case of Oladele & Ors v Nigerian Army (supra) the Appellants who were injured in the ECOMOG peace keeping operations in Liberia were flown to Egypt for medical treatment.

“On the day they were to return to Nigeria they protested violently at the Cairo Airport over the non-payment of their estacode. They were brought home and charged with mutiny, convicted and sentenced to various prisons terms including life imprisonment by a Court-Martial.

In setting aside the conviction and sentences passed on the Appellants the Court of Appeal observed thus:

“If anything at all, all they did was to protest the non-payment of their estacode. Such a protest finds justification on the admission of PW4 that he had paid some soldiers who earlier traveled with some estacode and was emphatic that the Appellants were not prohibited but
there was no express provision for the payment of estacode to them’”.

Mr. Falana said that based on the reasoning of the appellate court, the soldiers’ protest at Maimalari Cantonment found justification in the indictment and removal of the GOC which led to his compulsory
retirement from the Nigerian Army.

“In other words, the Military Authorities found that the complaints of the soldiers were not unfounded. Hence the GOC was removed and retired “with immediate effect.”

Mr. Falana said that the trial of the convicts had been vitiated by the fact that they were wrongly and illegally charged with conspiracy and mutiny contrary to the intendment of the law.

“Therefore, the decision of Court Martial cannot stand having being anchored on the wrong section of the Armed Forces Act. The convicts ought to be  discharged and acquitted by the Chief of Army Staff.”

Mr. Falana also argued that the prosecution failed to prove beyond reasonable doubt that the car of the GOC was fired at by any of the 12 convicts.

“In any case, it was not established that the agitated soldiers wanted to kill the GOC. If there was a plan to kill the senior officer he would been have shot when he addressed the soldiers. But it was when he was going back to his office that his car was shot at, only once.

“Since each of the soldiers had not less than 30 rounds of ammunition at the material time they would have fired several shots at the car from all directions if they had planned to kill  the GOC.”

However, having also been convicted for insurbodinate behaviour for carrying out violent protest, Mr. Falana said that the soldiers were properly convicted on that count. But by being first offenders, he argued that the convicts should not have been given the highest punishment for the offence by the Court-Martial.

“Even though they were ill-equipped and ill-motivated, they had fought the Boko Haram troops with courage, commitment and loyalty to their country,” Mr. Falana said.

“In the process they had lost many of their colleagues including the 10 whose corpses were brought to the Mailamari Cantonment.”