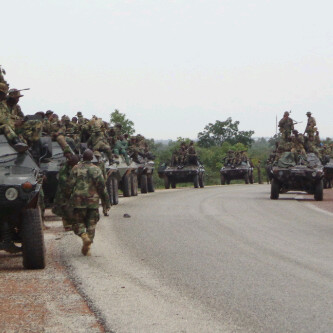 Angry soldiers from the newly formed 7th Division of the Nigerian Army in Maiduguri today May 14th revolted against their General Officer Commanding, Major General Abubakar Mohammed, shooting sporadically in the Maimalari barracks, which is also home to the Artillery Corps, the Ordinance, as well as army signals in Maiduguri, Sahara Reporters reports
According to two soldiers who spoke with SR, emotions ran high when they saw the bodies of their colleagues ambushed and killed by Boko Haram men in Chibok, Borno state. The angry soldiers immediately started shooting into the air, complaining that their superior have failed to provide them with adequate weaponry with which to fight the war against the better-armed Boko Haram militants.

“We the soldiers don’t have the kind of arms and ammunition that [Boko Haram] fighters have. So everyday, they kill our men anyhow, but it is never published in the media,” said one source. The other source also complained that the commanding officers “are too busy ‘eating’ money. And they do not pay our allowances on time. And once [a soldier dies], nobody knows what happens to his allowances again.”