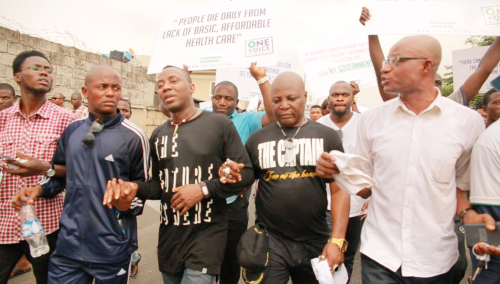 A nationwide protest against bad leadership and the harsh economic conditions in the country took place simultaneously in various location in Nigeria on Monday, including Lagos, Abuja, Oyo and Port Harcourt.

In Lagos, the protest started on a drab note at the National Stadium as well armed officers of the Nigerian Police were prominent at the venue and overrunning the area with their vans.

State Commissioner of Police Fatai Owoseni said the police were present only to ensure peace and order.

“If you look towards the gate, you will see that the gates have been opened and our men are just controlling the flow of traffic and people, and my men are all stationed to douse any kind of fear from the minds of the protesters.”

In the days preceding the protest, he had indicated he would not allow it to hold, but a statement by Vice-President Yemi Osinbajo and Nobel laureate Role Soyinka that it is the right of citizens to protest voided his feeble objections.

Early in the morning, people carrying placards began to troop in, highlighted by the arrival of SaharaReporters publisher and founder, Omoyele Sowore, with a crowd of protesters.  He led many of them out of the stadium singing and stating he came for a street protest, he led a massive crowd towards Ojuelegba, from where the crowd turned and moved down to the National Arts Theatre, Orile-Iganmu.

Charles Oputa, popularly known “Charly Boy”, at that point joined the protest and walked with the crowd down to the theater.

Preparations for the protest anchored by “Enough is Enough” Nigeria had also been widely highlighted by the last-hour cancellation by singer Innocent Idibia, aka Tuface, and the proposed counter-rally by a pro-Buhari group.  Nonetheless, Lagosians turned out in large numbers to demand better economic conditions from the government.

Speaking to pressmen during the march, Charlie Boy expressed excitement at the turn out of people, saying he was happy that Nigerians are now becoming aware and taking charge in demanding better governance.

“I am very very happy that for once, we are killing our docility that is wounding our humanity. I like the expression of anger, frustration that I am seeing. This is what we should continue to do because government must work for us,” he said.

Reacting to Tuface’s abrupt cancellation, Sowore said the protest was not about an individual but about thousands of Nigerians whose livelihood has been disrupted on account of the economic hardship and the clueless leadership by the current administration.

“This is not about one face; you are using a thousand faces,” he said.  “They are more important than Tuface, and that should be satisfactory to anybody. These are Nigerians; they are all important in their own right.  Tuface is just one person, who has an appellation called Tuface. This is not about him, so please forget about Tuface, let the struggle continue”.

Seyi Law, a popular comedian, condemned the government and criticized the 2017 budget and the federal cabinet.

“We have to make transparency the key for this government. We are demanding accountability. Make we know those wey dey collect the money. Somebody go school, all the years wey you spend for school, you no see work. Meanwhile, one militant wey dey cause trouble dey collect money every month.”

A former student activist and National Coordinator of The Education Rights Campaign (ERC), Taiwo Hassan Soweto, lambasted the inefficiency of the Buhari-led government, adding that both dominant parties in the country have failed the nation and Nigerians as a whole.

He criticized the N5000 stipend reportedly being paid to vulnerable Nigerians by the Federal government, stating that the allowance is nothing compared to the high cost of living in the country.

Like other speakers before him, he encouraged Nigerians to continue to demand better welfare and good leadership.

Yomi Fabiyi, an actor, said he was present at the rally to identify with the suffering masses.

The protest ended at the National Theatre in Iganmu, with a plan to continue tomorrow, Tuesday, as well, as Wednesday.

In Port Harcourt and Uyo, the Nigeria police reportedly harassed protesters and prevented them from expressing themselves.