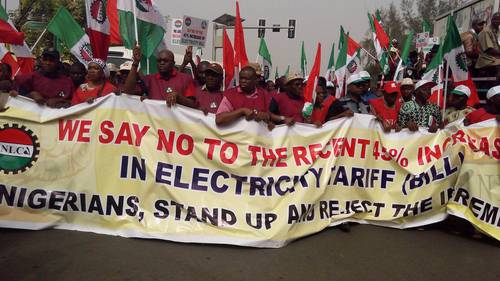 Business activities were today grounded to a halt in Nigeria’s federal capital Abuja as Nigerian labor unions embarked on a peaceful mass protest against the outrageous hike in the electricity tariff which took effect early this month.

The first point of call was the Abuja Electricity Distribution Company (AEDC) located at Wuse Zone 4 where the  President of the NLC, Ayuba Wabba addressed the crowd saying that the time of taking people for granted is over, that billing all over the world is based on what you consume. He maintained that there must be a stop to the impunity as the regulatory agency is expected to protect the interest of consumers.

“President Buhari must stand with the people as he promised Nigerians and he must revisit the privatisation of power sector. We would not allow where you ‘Genco and Disco’ to exploit Nigerians, and there must be an end to the estimated billing.”.

Waba decried the 45% increase in the Tariff is a fraud and stated it would be rejected by Nigerians.     He said that due process in the extant laws for such increment was not followed in consonance with section 76 of the Power Sector Reform Act, 2005. There has been no significant improvement in service delivery. Moreover, the fact is that most consumers are not metered as required by the privatization Memorandum of Understanding, MOU,  signed on November 1, 2013, which stipulates that within 18 months gestation period, all consumers are to be metered. While responding on behalf of company Head of Public Relations, Ahmed Shekarau told the protesters that the company would provide 100,000 prepaid meters free of charge to consumers, and same would repeat in the next five years.

As at the time of filing this report the protesters were heading toward Nigeria Electricity Regulatory Agency (NERC) and mobilise to the National Assembly where a formal letter would be handed over to the leadership.

The Nigerian Police and other security operatives were seen providing security for the protesters as they move from one location to another to prevent a breakdown of law and order.