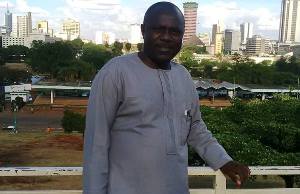 The Managing Editor (Northern Operations) of the New Telegraph Malam Suleiman Bisalla died in the blast that hit a shopping mall in Abuja yesterday.

Malam Suleiman joined the New Telegraph from Daily Trust Newspaper where he rose to the position of Deputy Editor.

The management of New Telegraph newspapers announced Suleiman’s death in a statement in Abuja yesterday.

The statement reads in part: “Malam Suleiman Bisalla, aged 46, died in the bomb blast that occurred at the Emab Plaza, Wuse 2, Abuja on Wednesday June 25, 2014.

“Until December 2013 when he joined New Telegraph, Bisalla was a Deputy Editor and Political Editor  with the Daily Trust Newspapers, Abuja.”

A statement issued by his elder brother, Mohammed Bisalla, said he will be laid to rest today June 26, according to Islamic rites.

Managing Director of New Telegraph, Mr Gabriel Akinadewo, described Bisalla as a thorough bred and hard working journalist who will be greatly missed by the company.