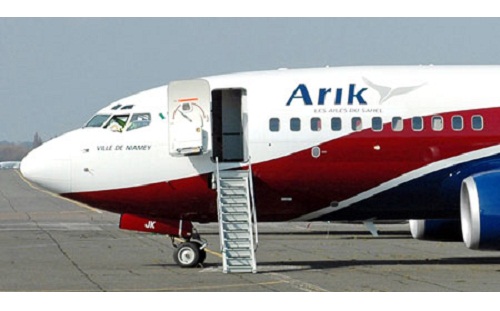 Nigerian Hack-activists, a cyber activism group, on Thursday, expanded the frontiers of internet activism in the country when it shut down the website of Nigeria’s largest airline, Arik Air, to protest the airline’s ‘poor’ customer service.

Arik Air is the first private business in Nigeria known to have suffered a hack attack by activists.

The attack, called ‘Op-ArikAir’ lasted hours and was watched by Nigeria’s social media community, as the hacker(s) live blogged the attack  on twitter with the handle – @Op-ArikAir.

“In less than 15 seconds, we will launch a HUGE Denial of Service against arikair.com and take it off the interwebs,” the hack group announced at about 2.00pm Thursday.

The hackers said they were fighting for justice for all Arik Air customers that were treated shabbily by the airline in the past.

Arik Air’s public Relations manager, Banji Ola, claimed the attack was fictitious when contacted by PREMIUM TIMES. He said he had no “knowledge” of the attack.

A long running case of stolen iPad belonging to Japhet Omojuwa, a blogger had triggered mounts of complaints of poor customer service and theft of properties while on board by the airline’s customers on the social media.

Cyber warfare is fast becoming a major protest tool for  Nigeria’s social media community. Besides using the internet to disseminate information, protesters use hacking skills to get government officials’ attention to civil issues.

After playing a major role in the global Occupy Movement, the internet anarchy group, called Anarchy, is lending support to clones in developing countries, including Nigeria.

Various clones operating in Nigeria have carried out operations against government internet infrastructures as a means of protesting unfavourable policies, mostly as support for a protest in the social media community.

Early in January, during the Occupy Nigeria protest, Nigeria Cyber Hack-activists, the lead clone of Anonymous, began a “Tell Them How You Feel” campaign. The group bombarded mobile phone lines of Nigerian politicians, lawmakers and top government functionaries – including the Vice president – with a million text messages each.

Thereafter, these phone numbers were published by the group on social media, inviting Nigerians to call or text them to denounce the policy.

Nigeria Cyber Hack-activist, believed to be made up of mostly young people, have been carrying out attacks on government internet infrastructure since 2010. It was a means of protesting the lavish expenditure of the government on Nigeria’s 50th anniversary – in the face of worsening poverty and infrastructure decay. The group launched attacks that crippled many government websites.

After the Occupy Nigeria protest, Nigeria Cyber Hack-activists announced it was planning an attack on the Economic and Financial Crimes Commission’s website in a bid to push the anti-corruption commission into arresting Messrs Femi Otedola and Mike Adenuga, earlier fingered as members of a cabal that have fuelled corruption within the oil industry.

But a day before the group’s planned attack, EFCC’s website was brought down.

No other group claimed responsibility for the attack.

The unannounced attack on EFCC’s website suggested there were other hack groups operating in Nigeria. In 2012 alone, up to eight hack groups with focused operations on Nigeria have sprang up in the cyberspace – including Anonymous Nigeria, Ibomhacktivist, and the latest Op-Arik.

Anonymous Nigeria is a formal clone of Anonymous, the shadowy internet collection of social justice hackers.

Anonymous Nigeria also waged a relentless cyber assault on the Nigerian government “in defence and support of the Occupy Nigeria protests,” a communiqué on its website said.

“We have relentlessly documented and disseminated information proving the complete corruption of our leaders,” they said. “We will stop at nothing to fish out the unscrupulous elements governing our nation. The government must eliminate every form of corruption in high places.”

Yet, Anonymous Nigeria did not claim responsibility for the alleged EFCC website hacking.

The radical, faceless, and irrepressible groups threatened to upload stuxnet – a deadly computer worm discovered in 2010 – on Shell flow station in the oil rich Niger Delta after the government threatened them with treason and arrests.

They warned that Nigeria’s cyber infrastructure was insecure and would overthrow it if the government does not meet their demands to stop corruption and political patronage in Nigeria, cut waste in governance, and prosecute members of the cabal.

Though working independently, the hackers appear to be bound by a common cause.

“We are not just hackers, we are comprised of people from all works of life digitally fighting a general cause which is “Nigeria’s liberation from Oppression” regardless of where we are based,” Nigeria Hack-Activists said. Link: http://premiumtimesng.com/news/101768-hackers-attack-arik-air-website-in-protest-of-poor-customer-service.html