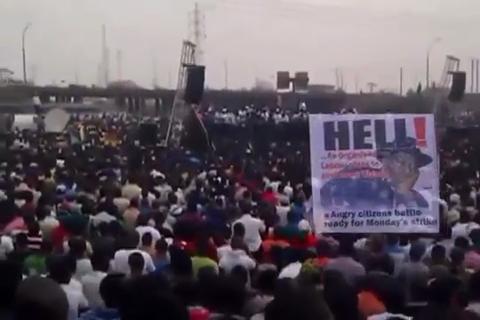 The Nigeria Labour Congress (NLC) has advised the federal government to revert the pump price of petrol to what it was or be ready for a showdown.

Peter Ozo-Eson, secretary-general of the union, said the increase is the “most cruel in history”, vowing that labour would do all within its powers to resist it.

Ozo-Eson said at a meeting that the organisation held with the government earlier in the day, labour advised that the idea be shelved “until, at least, it meets with the appropriate organs of the congress”.

“We urge the government to revert the prices to what they were. We would want to put everybody on notice that we shall resist this criminal increase with every means legitimate,” he said in a statement.

“The unilateral increase in prices of petroleum products today by government represents the height of insensitivity and impunity and shall be resisted by the NLC and its civil society allies.

“The unjustifiable electricity tariff and other economic challenges brought on by the devaluation of the naira and inflation, the least one had expected was another policy measure that would make life miserable for the ordinary Nigerian.

“The latest increase is the most audacious and cruel in the history of product price increase as it represents not only about 80 per cent increase but it is tied to the black market exchange rate.

“Furthermore, the process through which government arrived at this is both illogical and illegal as the board of the PPPRA is not duly constituted.”

The statement said NLC through its previous statements and communiqués had said the need for the reconstitution of the boards of NNPC and PPPRA.

Ozo-Eson accused Ibe Kachikwu, minister of state for petroleum resources, of having overbearing influence and acting as a sole administrator.

He said the next line of action would be determined at an emergency meeting which had been fixed for Friday.