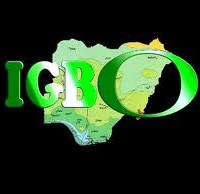 by Obinna Akukwe
·          Igbos in the North to be vigilant, before and after elections
·         Igbo Governors should assist in evacuating Igbos trapped in violence
·         Let God and conscience guide whom to vote for
Alleges billions exchanged  for endorsement by  sacked executives
Ohanaeze Ndigbo has denied endorsing President Goodluck Jonathan for a second term. They rather asked Igbos to vote whosoever their conscience permits them in the February 14th Presidential polls. Speaking on Thursday with the Director General of Igbo Mandate Congress (IMC)  Rev Obinna Akukwe who led a team of concerned Igbo stakeholders to know the direction of Ndigbo in the 2015 Presidency project and the security of Ndigbo in the North especially after the elections,  the Chairman of Ohanaeze Elders Council, Chief Mbazulike Amechi described those who purportedly endorsed Jonathan for a second term as “a group of illegal Ohanaeze whose major purpose is to collect and share billions of naira without any negotiation over the fate of Ndigbo during and after the Jonathan era”. Chief Amaechi told the leaders of Igbo Mandate Congress that those that went to Abuja to meet with Jonathan are speaking for themselves and their family. According to him “The basic interest of those endorsing Jonathan is to collect money. They were sharing millions and hundreds of thousands on Tuesday to some persons and we the Elders Council of Ohanaeze are not a part of it. Some persons even got their finger bitten off while some women got their dresses torn while struggling for the money from Abuja. That is not what Ohanaeze stands for”
The Chairman of Ohanaeze Ndigbo Caretaker Committee, Chief Raph Obioha told Rev Akukwe that “Ohanaeze Ndigbo, of which I am the Chairman of the Caretaker Committee, has not endorsed anybody. We have presented four cardinal things that any candidate we must support will do for Ndigbo. These issues include the security of lives and property of Ndigbo, before, during and after the elections. Secondly is the callous neglect of Igbo territory since after the civil war, including the present administration,. Thirdly is the need for Igbos who lost billions of investments and millions of lives to be properly reparated. Fourthly is the political fate of the Igbos after the tenure of Goodluck Jonathan”.
Dr Zed Chukwujama, Secretary Ohanaeze Caretaker Committee  expressed worry over the fate of Igbos in the north after the elections and told Igbo Mandate Congress leaders “that those who are sharing the millions  are not thinking of how to protect Igbo lives and property especially in the North”.
Ohanaeze Caretaker Committee gave the leadership of Igbo Mandate Congress a copy of the communiqué of the meeting presently ongoing at Enugu. The resolution of Ohanaeze Ndigbo as contained in the communiqué includes:
“Since there has been no concrete agreement with any of the Presidential Candidates on the four cardinal issues of security for life and property of Ndigbo, infrastructural development in Igboland, Reparation for atrocities and war crimes against Ndigbo, at least to the level recommended in the Oputa Panel Report, Ohanaeze Ndigbo is unable to commit Igbo voters at home and everywhere to the blanket support of any of the Presidential Candidates. We therefore advise and guide Igbo voters’ everywhere as follows:
“(a) On the day of the election, after praying to God in whatever way you worship Him, listen to Divine Guidance, go and cast your vote for ANY candidate your conscience guide you to”
(b) Be vigilant before, during and after the election, make appropriate arrangements to save your life, your family and your property
(c) In view of the ominous uncertainties that loom in the air, Igbo Governors should make contingency arrangements, separately and collectively, to evacuate Igbo citizens who may be trapped in areas of violence”.
The communique obtained by Igbo Mandate Congress was signed by Chief Mbazulike Amechi, Chief Ralph Obioha and Dr Zed Chukwujama. Ohanaeze Ndigbo Caretaker Committee meeting is still ongoing as at press time. The Ohanaeze Elders Council has declared the Igariwey led leadership of Ohanaeze Ndigbo illegal hinging it on the expiration of their two year tenure and appointed a Caretaker Committee to pilot the activities of Ohanaeze fo the next six months.. However the Igariwey led leadership has refused to comply with the orders of Ohaneze Elders Council, an issue before the court.
It would be recalled that the Chief Igariwey led Ohanaeze Ndigbo  had earlier endorsed Jonathan secretly at Aso Villa on the 12th of January  with a delegation of some Igbo leaders which include Chief Emmanuel Iwuanyanwu, Eze Cletus Ilomuanya, Senator Ken Nnamani, Senator Hope Uzodimma  among others. The open endorsement earlier scheduled for Abakaliki on the 14th of January was shelved due to the opposition from the Elders Council. However on Tuesday, they finally made the secret endorsement open at the Ohanaeze Ndigbo Secretariat Enugu.