SaharaReporters has obtained a letter written on behalf of the Minister of Information and Culture Lai Mohammed to the National Broadcasting Commission (NBC) requesting a loan of N13,120,470.

The letter, authored by the Director of Public Relations and Protocol, NPD Dama, begins by stating “I am directed to inform you [NBC] that the Honourable Minister of Information and Culture, Alhaji Lai Mohammed is proceeding on official assignment to China on Sunday, 15th May 2016.

With this govt constantly singing cash crunch, N13m trip to China by a Minister & his team is wrong on every level! pic.twitter.com/l5awy1qOwv

It then continues, “the Honourable Minister has therefore approved that you loan the Ministry the total sum of (N13,120,470) thirteen million, one hundred and twenty thousand four hundred and seventy Naira only to enable him and his team embark on the China trip to carry out the assignment.”

Mr. Mohammed confirmed the existence of the loan to a SaharaReporters correspondent saying “it’s not unusual when the ministry wants to do something but you don’t have enough funds you ask one of your parastatals under you to provide the funds for the trip.”

“While we are waiting for the appropriate head to have the money you can go to any of your parastatals and ask, give us the money and when we are funded we will return the money to you,” he added.

Mr. Mohammed also told our correspondent that he could not access his Ministry’s budget because it has only just now been approved.  Worried about how the memo was leaked, Mr. Mohammed said,  “I am so disappointed that an internal memo like that would be with SaharaReporters, it shows a lack of integrity in the ministry.”

When SaharaReporters began questioning why Mr. Mohammed requested a loan from the NBC, and not from a tourism parastatal since the trip is for tourism investment, he responded by saying “the way the ministry is run is not the subject of public discussion.”

Later, however, Mr. Mohammed revealed that there was not enough money in the department of tourism to cover the expenses of his trip to China.

SaharaReporters then asked whether multiple letters requesting “loans” were also sent to various government agencies and parastatals under his watch, which Mr. Mohammed replied, “I do not owe you an obligation or duty to tell you that.”

When our correspondent pushed the minister to offer a breakdown of the trip costs he again stated: “that I do not owe you any obligation to tell you that.”

SaharaReporters then asked: “don’t you owe the public explanation for how you spend their money?” To which Mr. Mohammed said, “I do not.”

You can read the entire letter below: 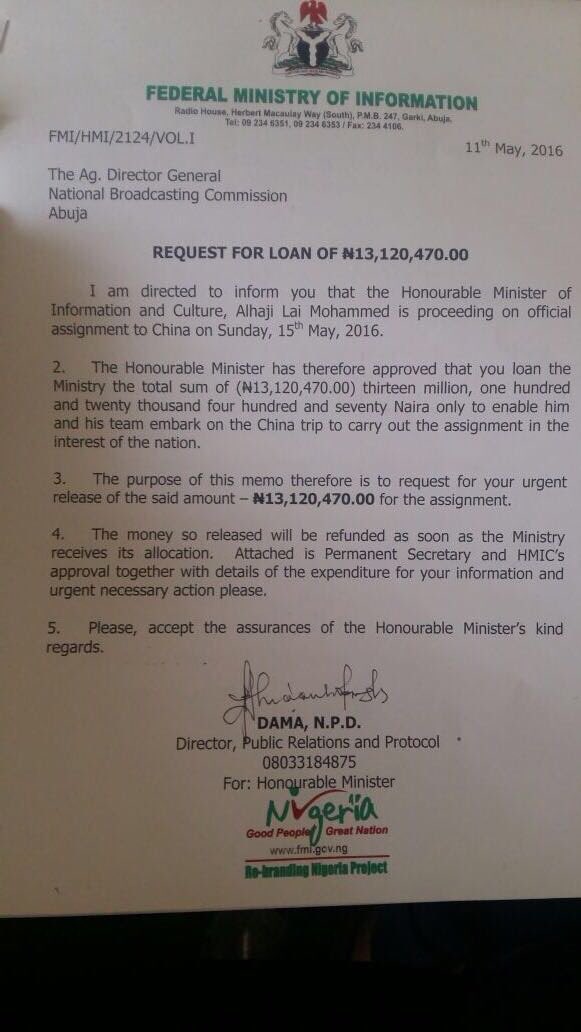