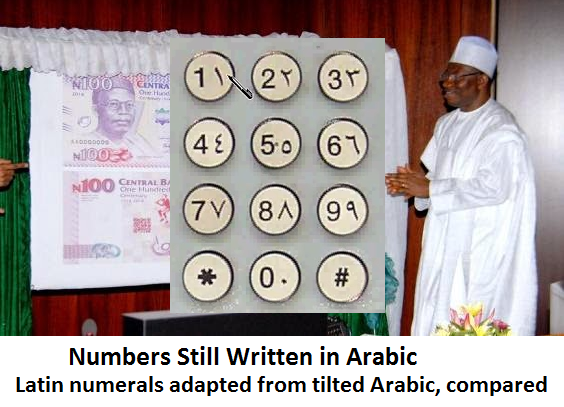 The Presidency yesterday responded to a press statement issued by our organization, the Muslim Rights Concern (MURIC) in which certain issues were raised, especially the supplanting of Arabic Ajami with the Jewish symbol. According to the Presidency, the symbol on the new N100 note is not the Star of David but a spark security feature.

MURIC is satisfied with the Presidency’s explanation regarding the symbol on the new N100 note. But the Presidency has said nothing about the rationale behind the removal of the Arabic Ajami on the old note. The spark security feature (what we initially called Jewish symbol) is peripheral in this case, what is tangential is the Arabic Ajami that was removed.

The average Northerner cannot read any other script except in Arabic Ajami and anyone who wants to communicate with him effectively must use the Ajami, not even writings in Hausa language can help in this matter and the Presidency should know this. Millions of Northerners have therefore been marginalized by removing the Arabic Ajami from the new N100 note.

The removal of Arabic Ajami is being interpreted as an attempt to discourage the learning and use of Arabic language which is the language of the Glorious Qur’an. It is a sensitive religious matter. Nobody can do this in Nigeria and expect the Muslims to organize a carnival for him.

We complained in 2005 when Arabic Ajami was removed from new naira notes during the tenure of Dr. Soludo as Governor of the Central Bank. The fact that the same thing is repeated has raised concern among Muslims. It means that there is a conspiracy to gradually and tactically eliminate Arabic Ajami. The Presidency has failed to address this.

Instead of demanding an apology, the Presidency should have appreciated MURIC’s enquiries. Our statement was issued without malice and we did not issue any threat. The Presidency’s reaction is an admission of the removal of Arabic from the new note. Also, our attention would not have been drawn to the symbol if Arabic Ajami had not been removed from the new note. We demanded an explanation and one has been offered. If indeed we are tax-payers, if indeed Nigeria is a democracy, what offence have we committed by asking the President we voted into power to explain certain things? We are satisfied in one area but there are still some green areas.

We still ask the Presidency to tell Nigerians why Arabic Ajami was removed. We stand by our claim concerning the gross numerical imbalance between Christian and Muslim delegates in the last National Conference (303 Christians to 189 Muslims).

We are not satisfied with the Presidency’s response on this issue. One group has been favoured above another and Mr. President gave Muslims a promise which he did not fulfill, that is the issue, not what was discussed at the National Conference. This is fundamental. In any case, even the Presidency is aware that there is still opposition to some of the matters ‘concluded’ at the National Conference.

The Presidency in his response was also silent on the allegation that no Muslim Minister was appointed for about four years until a formal complaint was lodged by Muslims. It is our humble submission that Mr. President has responded where he finds it convenient to do so.

MURIC appreciates the lightening-speed reaction to its enquiries and wishes that the Presidency sheds light on issues like this whenever they are raised by tax-payers.

The issue of Israeli security experts in Aso Rock, whether true or false, would have been laid to rest if the Presidency had been reacting to publications on the matter which began a long time ago. MURIC is not the first to raise the issue. It has been in the press for a long time.

As part of civil society, our role is to bring the people’s observations to the attention of government, thereby contributing to efforts towards ensuring good governance. We promote dialogue, condemn terrorism and douse tension. Those questions asked by MURIC came from Muslims all over the country, particularly at the grassroots level. They were not questions from elites among the Muslims, neither did they come from Muslims in the corridor of power.

For instance, the symbol which was initially taken to be the Star of David had gone viral on internet, Blackberry messages, Whatshap and other social media for about a fortnight particularly among Muslim groups before MURIC spoke up. The handlers of the Presidency’s social media department should have called the Presidency’s attention to it and a simple statement from Aso Rock would have saved the day. MURIC’s role in this regard should be seen as complementary, not hostile or confrontational.

Finally, MURIC assures the Presidency of its highest regard for the office of the President. The issue of the symbol on the new N100 note is settled but the removal of Arabic Ajami still remains.

We also affirm that Nigerian Muslims are not anti-Jonathan as millions of Muslims voted for President Jonathan in the last election and they are still members of the ruling party as well as other political parties. The issues raised in our statement are non-political and the earlier the Presidency addresses them or makes amends the better. Nigeria of today does not have the luxury of time.