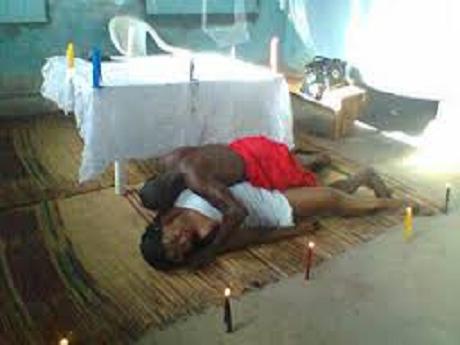 THE Church has since become a cracked record, no thanks to the randy pastors. Leaders fight dirty for positions.

If the full facts were known, we would easily find that 50 percent of the case loads in our courts emanate from the pulpit.

We defecate on the altar; rip off pages of the Bible to clean up; and go free. The pastor has lost the moral courage to question us.

After all, he has just completed a secret burial of a member of the choir that he impregnated and took through a failed abortion. It’s a sordid affair! In the beginning, the church was one place where people thought they could seek protection in times of trouble.

Every definition of rape, from Wikipedia to the Black’s Law Dictionary or the Nigerian Criminal Code, accepts basically the same attributes – sexual assault usually involving sexual intercourse, which is initiated by one or more persons against another person without that person’s consent.

The act may be carried out by physical force, coercion, abuse of authority or with a person who is incapable of valid consent, such as one who is unconscious, incapacitated or below the legal age of consent.

The U.S. Bureau of Justice Statistics (1999) estimates that 91 percent of rape victims are female, while nine percent are male. Conversely, 99percent of the offenders are male while one percent is female.

To qualify for rape, the act does not necessarily have to contain all the elements enumerated above. If we were to restrict ourselves to the issue of consent, Ed Gein, the Wisconsin necrophiliac would have remained totally innocent in rape records. Before he was arrested in 1957, Ed Gein was a sexually frustrated man who got a kick from digging up newly buried female corpses, using them to satisfy his sexual urge and eating parts of them.

In the past, anything was fair in war, love and politics. When an army captured a place, soldiers raped the girls with impunity. Rape was regarded as the spoils of war; the fringe benefit for soldiers. During the Nigerian civil war, it became a disadvantage to be beautiful. When the soldiers captured one of those coastal towns along the River Niger, a beautiful girl was held captive.

With the mother at the sitting room, ten soldiers lined up to take their turns in that single ‘borehole’. The girl was wailing in excruciating pains in the room, the mother was comforting her in their dialect: “My daughter, dooo, be patient, only five of them remaining”. This debit side of the war was commonplace.

The credit side was much brighter. The Northern soldiers married our beautiful girls as the war progressed and today, we have all the fine results to show for their efforts at uniting the nation all over the place.

Things are changing. In 1998, Judge Navanethem Pillay of the International Criminal Tribunal for Rwanda declared: “From time immemorial, rape has been regarded as spoils of war. Now it will be considered a war crime. We want to send out a strong message that rape is no longer a trophy of war”. The happenings in the house of God in Nigeria today provide a most frightening glimpse into our future.

The message is coming out loud and clear, that rape is right if it is in the church. We have randomly picked up a few headlines in the newspapers of the past two weeks: “Pastor accused of raping minors at orphanage” – The Punch; “Court adjourns case against Pastor to September 24″; “Court remands pastor for alleged rape of church member” – Vanguard; “CAC Pastor allegedly rapes, impregnates church member”; “Pastor rapes and impregnates teenage girl in his church”; “Man, 40, rapes 10-month old girl inside church” – Online Nigeria; “Shameless Pastor rapes 12-year old girl” – Church Daily Post Nigeria; “Nigerian Bishop rapes female student… “. Call it sexual perversity or promiscuity, it is all happening in the church.

And then, Pastor Philip Ogbebor – allegedly had carnal knowledge of a 20-year-old male member of his church; administered secret oaths on him and threatened to kill him if he told anyone.

Bishop Chibuike Nwabueze personally stated his own case. He was invited to minister at Calvary Army Ministry, Rumuoji Eneka in Obio Akpor LGA. After preaching, he went to rest. While he was resting, a girl came for deliverance. While he was yet pleading the blood of Jesus on the girl, she had undressed. Before he could restrain the girl, he was already reading her ‘New Testament’. Nwabueze says he had been set up by the host pastor because of the tussle over the chairmanship of the Rivers State Communion of Bishops. Meanwhile, a pregnancy has resulted and an abortion procured. Whichever way the coin falls, he is a culprit: head he loses; tail, he does not win. The chairmanship rivalry only succeeds in exposing another side – the dirty politics in the church.

Where do we go from here? First, rape is madness and like all mad people do, rapists deserve our prayers. The church must continually pray for them.

Second, rape is the moral equivalent of war and it must be treated as such! The more advanced democracies of the world are already facing it squarely. We have enough laws in our statute books to deal with the menace. While Section 358 of the Criminal Code prescribes life sentence for anyone found guilty of rape, Section 359 prescribes 14 years imprisonment for attempted rape.

Most importantly, true cleansing of the church must start from within. The easiest way of perpetuating evil is for good men to do nothing. Decent members of the church community cannot continue to watch while these randy pastors drag everyone deeper into the abyss. We want to hear the hot debates and correctional fights raging in their fold!

A different take on our responsibility to judge according to scripture: Judge a righteous judgment

Joh 7:24  Judge not according to the appearance, but judge righteous judgment.

1Co 6:1 Dare any of you, having a matter against another, go to law before the unjust, and not before the saints? 2 Do ye not know that the saints shall judge the world? and if the world shall be judged by you, are ye unworthy to judge the smallest matters? 3 Know ye not that we shall judge angels? how much more things that pertain to this life? 4 If then ye have judgments of things pertaining to this life, set them to judge who are least esteemed in the church. 5 I speak to your shame. Is it so, that there is not a wise man among you? no, not one that shall be able to judge between his brethren?

1Co 5:1 It is reported commonly that there is fornication among you, and such fornication as is not so much as named among the Gentiles, that one should have his father’s wife. 2 And ye are puffed up, and have not rather mourned, that he that hath done this deed might be taken away from among you. 3 For I verily, as absent in body, but present in spirit, have judged already, as though I were present, concerning him that hath so done this deed, 4 In the name of our Lord Jesus Christ, when ye are gathered together, and my spirit, with the power of our Lord Jesus Christ, 5 To deliver such an one unto Satan for the destruction of the flesh, that the spirit may be saved in the day of the Lord Jesus. 6 Your glorying is not good. Know ye not that a little leaven leaveneth the whole lump?