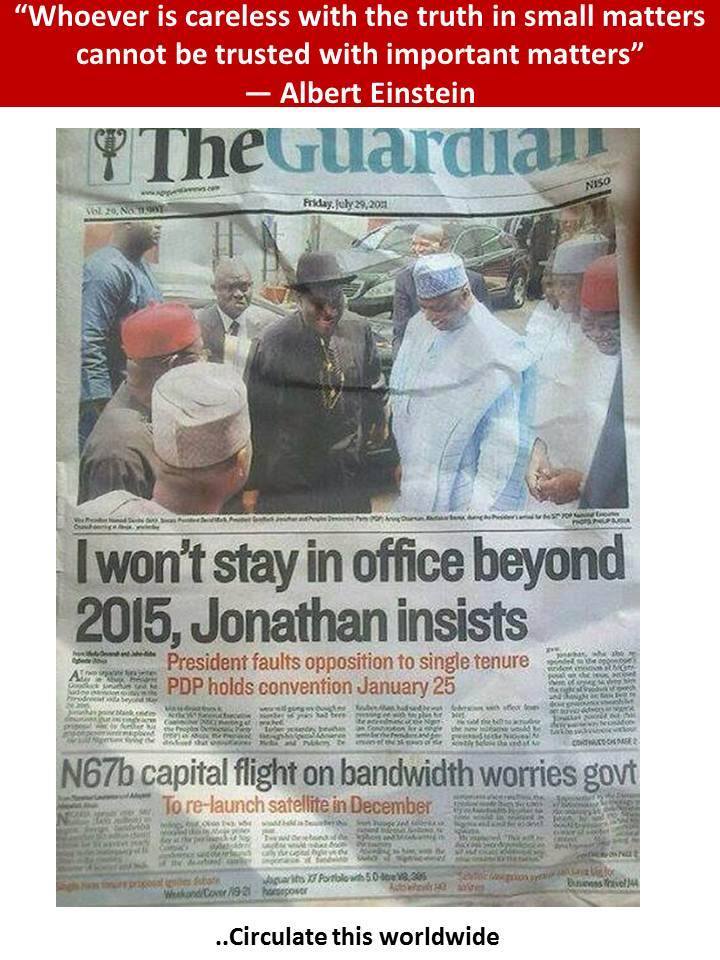 As Nigerians hoped last week that the so-called ceasefire announced by the Goodluck administration with Boko Haram terrorists will be bilateral, and that over 200 girls abducted since April this year will regain their freedom along with the surrender of Boko Haram terrorists and release of over a dozen towns in the northeast captured by them; the only announcement Nigerians got was that Nigeria’s President, Goodluck Jonathan would be contesting reelection.

It has been recognized that the Jonathan-led Government is speedily processing a limited ceasefire with Boko Haram as a reelection necessity urged upon it in response to pressing local and global frustration. Jonathan could not declare for President if Nigeria had remained at total loss in its “war against terror” as it has over the six years of his rule. To this end the President after revelations by Australian negotiator Stephen Davis, this September finally temporarily declared a more responsible war on Boko Haram to amp. their negotiation power and then proceeded through the known Boko Haram sponsors from Borno and Chad, to negotiate and offer the terrorists what they want so as to get a period of respite at least till after the February 14th elections.

The Jonathan government has been caught using private jets of the President’s friends to cargo millions of dollars to foreign nations under auspicious conditions. In pleading for the current “ceasefire” with Boko Haram terrorists, unknown cash is allegedly being given to the terrorists in the deal being overseen by the President of Chad, Idriss Deby – known for his links with Boko Haram commanders – who recently oversaw a similar deal between the Government of Cameroon and the terrorists that got Chinese hostages and the Cameroonian Deputy PM’s wife released and landed Boko Haram terrorists $400,000 in cash and a supply of sophisticated arms and ammunitions which President Deby according to reports ensured the safe and unobstructed delivery of to the terrorists in the war front.

Jonathan is desperate and he is willing to sabotage and sacrifice Nigeria, life and logic to process his 2015 reelection ambition. It can be recalled that the very same President danced in Kano when the girls were abducted and his government first tried hard to deny the abduction, then claimed the girls had been released while embarrassing and suppressing legitimate struggles for their liberation. The Government’s lack of concern for the liberation of the girls was not better demonstrated than when Jonathan’s campaign committees as instructed by his media chiefs, coined the slogan, “#BringBackGoodluck2015” and scattered costly signposts and banners of this all over the nation, earning his government the nomination for the “worst political campaign slogan of 2014” from the WahsingtonPost.

Nigerians were enthused with the #VictoryForNigeria campaign against Boko Haram and right when the brave military were scoring continuous victories against the terrorists, the Nigerian President from a position of advantage at last rather surrendered to the terrorists and declared what has thus far been a unilateral ceasefire or better put, cessation of fire, as the terrorists have during this time, captured and attempted to capture more territory and abducted hundreds more citizens especially women.

Importantly, the conditions of the alleged cease fire have not been made public so far. Freeing the 200+ girls is only a figment of the current crises. Since the girls were abducted, Boko Haram has come out of the forests and occupied large parts of the northeast and now governs hundreds of thousands of Nigerians in occupied towns and villages. There cannot be a ceasefire unless all these towns occupied by Boko Haram are surrendered. Is this part of the deal? On Monday if/when the girls are released as is the latest update, and as we expect will happen in the urgency of President Jonathan’s official declaration for President, will all the towns in the northeast be vacated by the terrorist and will they surrender for justice as is the only condition for cessation of fire?

Nigeria was violated in two major ways last week. The President broke two major vows to the people: One was a vow to protect their dignity and uphold their honor and glory. After forcing for permission for a loan of $1 billion to use to crush the terrorists, the President betrayed Nigerians and rather further embraced their local and foreign sponsors and negotiated with terrorists to promise a ceasefire which did not happen, with the reverse- more Nigerians being killed and captured as the military stood-down  being the product.

Secondly, the President of Nigeria broke his covenant with Nigerians made in 2011 when he first sought reelection into Aso rock. Then, in 2011, the president publicly vowed that if elected he will only serve one term as President- one term being more than enough especially since he has been in the Presidency elected on the Presidential/Vice ticket for 4 years already and even served out the term of the late President. That he would not seek reelection was the condition he offered that made Nigerians vote for him. This week he broke that covenant made under God. There obviously is very little our leader can and cannot do or sacrifice for personal ambition and lust for power. It is scary times.